Going into the 2018 season, Braves catcher William Contreras was considered a deep sleeper in the deepest of dynasty leagues. There were rumblings and reports from those who had seen him in Danville, that he was the best prospect on a team that included Drew Waters and Kevin Maitan.

Around this time last season, I wrote a piece for Call to the Pen, profiling Contreras as a name that would end the 2018 season in the Top 100. Contreras received an invite to big league camp despite not playing above Rookie ball. These are contextual clues that you should use when viewing prospects. It tells you how the organization views them. These clues are often not a part of evaluations on a grander scale.

Fast forward to today. Contreras is back in big league camp after a stellar 2018 season. Contreras slashed .285/.347/.436. He posted a respectable .151 ISO and 125 wRC+ while walking at an 8% clip. His numbers did take a dip in August after a promotion to High-A. In my live looks, Contreras did not look overmatched. He was just gassed after catching everyday in the Georgia-Florida heat.

Despite the poor finish, Contreras’ good work did not go unnoticed by the industry. I thought at Prospects Live we would be on an island when we ranked Contreras as the 83rd overall prospect and 7th best catcher. He was 62 in my overall Top 100 prospects and ranked 6th on my Braves Top 50. Kiley McDaniel and Eric Longenhagen ranked him 55th in their Top 100.

Gabriel Burns of the Atlanta Journal Constitution wrote a fabulous piece on Contreras. A few quotes from Braves catching coach Sal Fasano highlight what I and others have seen in Contreras.

“When you see a guy who’s that athletic, the sky’s the limit on what he’s capable of,” Fasano said. “Hopefully we can start working on the discipline part, get him versed in our language we use, be it the blocking, catching and throwing, or the actual game-planning stuff, how to set up and game plan and work with pitchers. I think he’s got a really good aptitude and he’s willing to learn. So I’m excited to see what it’s going to be like.”

“When you start seeing that level of athleticism, someone who can run, someone who can hit, someone who can throw, they start to get fewer and far between behind the plate,” Fasano said. “So you’re talking about the (J.T.) Realmutos of the world. Obviously his brother is a tremendous athlete. Buster Posey from five or six years ago. Those are the type of guys that you see who are that athletic. Those are some of the three you could compare to.”

The athleticism is the first thing I noticed scouting Contreras at both Rome and Florida. He moves extremely well behind the dish, has a quick release and a plus throwing arm. He has a strong frame that can add 10-15 pounds of muscle and growth without sacrificing his athleticism. At the plate, Contreras showed patience and the ability to make in-game adjustments. On a team of free swingers, he often saw 4-5 pitches per at-bat. The contact was loud and hard. In fact, Contreras’ estimated fly ball distance averaged at 314 ft. To put that number into context, his fly balls on average went further than guys like Seuly Matias, Vladimir Guerrero Jr., and Nate Lowe. Contreras ranked 18th on this list. (min. 75 fly balls hit)

Contreras, however, is more of a line-drive hitter with gap-to-gap power. He averages ~55% line drives and fly balls. For most young hitters, power is a tool that is unlocked with experience and maturity. The ability to make consistent hard contact that travels may not always show up in the traditional stats but is something that evaluators notice right away.

A look at Contreras’ spray chart shows a player that is comfortable with using the whole field. His trends show line drives to all fields, pullside ground balls, and plus pullside power. It’s consistently unlocking the pullside power without sacrificing approach that is the next step in his development. 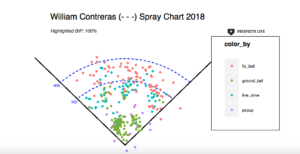