This week was the first time the city of Tacoma, WA had the privilege of hosting AAA baseball’s All Star week featuring the Pacific Coast and International Leagues. They did not disappoint!

In 2010, Cheney Stadium underwent a $30 million renovation that led to the city being awarded the game. The stadium is beautiful, seats slightly more than 7,000, has fantastic sightlines and very nice luxury suites.

Things started out on Monday with the Home Run Derby featuring:

Nunez and Walker were eliminated in round one, with Brentz and Vogelbach beating out Shaffer and Hayes in Round 2. In the final Brentz put it out of reach, laying claim to the championship belt before Vogelbach even stepped to the plate by pounding out 18 bombs in 4 minutes. Vogelbach, who came on strong late in round 1 by putting out 13, was worn down and only hit 8 in the final. Brentz provides quite a pop and, though he is 28, is still working hard to get another shot in Boston (or elsewhere). Thus far in 2017, he’s batting .270 with 18 HR’s (tied for third in the league) with 49 RBI’s and an .872 OPS. Vogelbach was favored to make the Mariners’ roster out of spring training but failed to do so. His defense needs work, and he needs to cut down on his strike outs at the plate as well. In all likelihood he will get a late season call up and get another chance to prove he belongs in the big leagues. 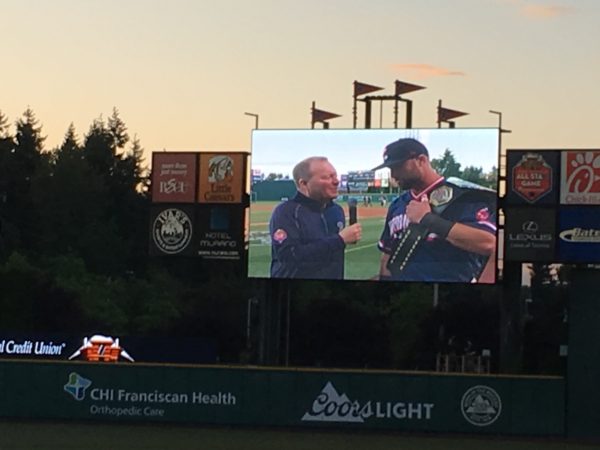 The All star game on Wednesday featured some some of the International and Pacific League’s best. I say some of the best because top prospects such as Yoan Moncada played in the Futures Game in Miami and didn’t make it to Tacoma. 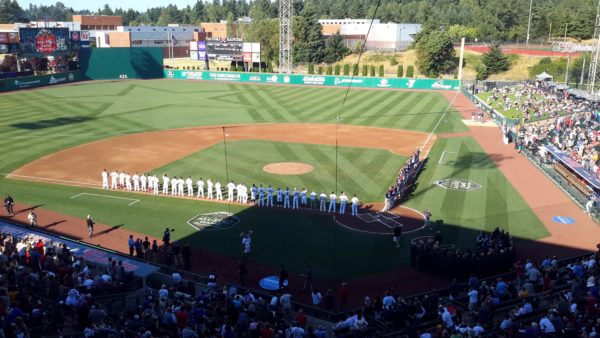 Richie Shaffer started the scoring with a second inning home run to put the International League up 1-0 . Colin Moran from Fresno (Astros) evened things up in the bottom half of the inning with his own shot to right. Moran (#11 in the Astros’ Prospects1500 rankings) is hitting .310 with 18 HR, 62 RBI, and .925 OPS at the midway point of the season. He also spent 9 games with the big club in Houston earlier this year.

The PCL got four runs off of Scranton/Wilkes Barre’s Caleb Smith (Yankees), including the third blast of the game from Renato Nunez who was disappointed with his early exit from Monday’s Derby.

The crowd got excited when Tacoma’s Jean Machi came out to pitch the fifth. Unfortunately he proceeded to give up two runs, including the fourth and final HR of the night to Willy Adames (Rays) of the Durham Bulls. The young shortstop started the season ranked #19 in the Prospects1500 list. Thus far he’s hitting .277 with 18 doubles, 7 HR, 5 triples and a .793 OPS. The Pacific added another run in the bottom half of the fifth, and pitching controlled the rest of the game with only one run being scored (7th inning by the International League) over the last four frames.

Two players speed stood out to me.

Las Vegas’ Amed Rosario (Mets), who flew down the first base line like a gazelle and made routine plays replay worthy. Rosario almost certainly will be going from the desert to the city in the very near future. Expect to see him out in Queens shortly.

The other was that of right hander Matt Carasiti (Cubs) who hit 97 MPH repeatedly in closing out the game. Carasiti who started out as a starter is projected to be a reliever when he makes it up to the majors.

Cheney Stadium features a 425 foot deep, 29 foot centerfield wall dubbed by the PA announcer as the “Great Wall of Cheney”. Only two players have ever hit a baseball over it: AJ Zapp and Shin Soo Choo.

Daniel Vogelbach got the biggest cheers of the night when he came out to bat in the seventh. He promptly struck out. 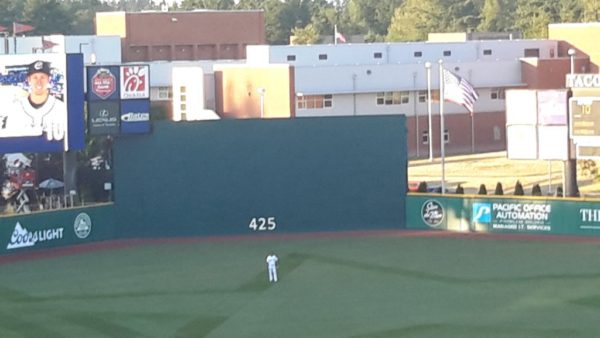