Any Red Sox prospect follower has been wondering how 2017 Carolina League All-Star Michael Chavis (my 2018 preseason top ranked Sox prospect) would fare upon his return to action this year following an 80-game suspension. He’s off to a slow start after his first 17 games but still showing the power he’s known for. Other prospecting eyes rolled when the news was announced that my preseason 2nd ranked player, Jay Groome, was done for the year and undergoing Tommy John surgery having been on the DL and not pitched at all in 2018. Those two were Boston’s top two minor leaguers across most 2018 organization rankings, some including them in Overall Top 100 lists prior to the season. Those lofty overall rankings have likely disappeared from most lists now and I think it’ll be difficult to find any Red Sox prospect on most midseason Top 100 lists. For reference, my 2018 preseason Red Sox Top 50 Prospects is linked here.

This is a minor league organization that has fallen in ranking, at least from where it stood just a couple years ago when it seemingly was one of baseball’s best farm systems. Many hold out hope that some of these prospects will turn into the next Betts, Bogaerts, Benintendi, or Devers. But for the few of those you can always get more the likes of Allen Webster, Jerry Sands, Trey Ball and Brandon Jacobs. I like some of Boston’s top draft picks from this past June, so let’s play the wait and see game. There could be some diamond in the rough here.

Michael Chavis with the hard shot into the RCF gap for the RBI double. 1-0 @PortlandSeaDogs. Good load on his back leg with a clean swing path. #MiLB pic.twitter.com/u1P2M7Qu5g 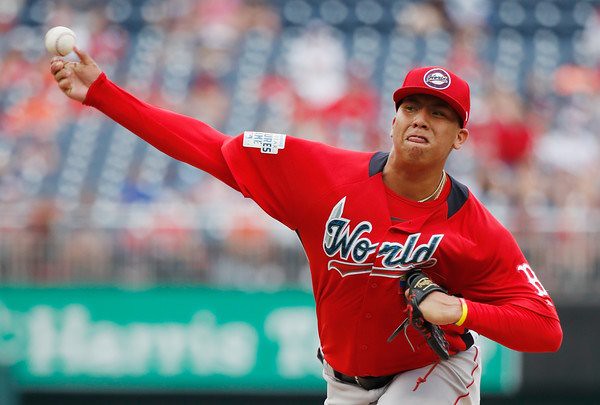 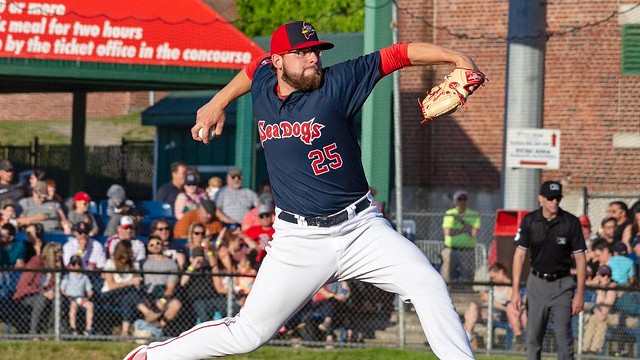 Tanner Houck settled into his starting role over the past month, posting a 2.78 ERA in his 5 July starts. His 37 strikeouts this month have added $925 to his season long fundraiser for the National Council for Adoption. pic.twitter.com/jmuty0BsvS

5. Jay Groome, LHP (Preseason #2)
Age: 19, currently with Full Season A Greenville (on DL)
Twitter: @jaygroome55
Groome went on the DL before even getting to throw a 2018 regular season pitch. He’s on the shelf until sometime in 2019 with TJS. Boston’s 1st round pick in 2016 has had multiple injury issues in his short MiLB career so far. He did look very good when healthy last year and this past Spring.

Just watched Jay Groome strike out the side in a minor league game, topping out at 95. All three swinging – two on curveballs, one fastball. pic.twitter.com/G2XBaaf4RF

6. Triston Casas, 1B/3B (Preseason N/A, drafted 1st round 2018)
Age: 18, currently with Short Season A Lowell (on DL)
Twitter: @mvptc37
Casas, Boston’s first round pick this past June, projectst to have a power bat. He’s out for the rest of 2018 after undergoing thumb surgery and will hopefully make his pro debut in 2019.

With the 26th overall pick in the 2018 #MLBDraft the #RedSox select INF Triston Casas of American Heritage School (FL)! pic.twitter.com/1kQADpyscJ

Tier 3:
7. Josh Ockimey, 1B (Preseason #3)
Age: 22, currently with Triple-A Pawtucket (just promoted 8/2)
Is it ok to have a second favorite Red Sox prospect? I’ve seen Ockimey slaughter some baseballs in Hartford against Yard Goats pitching late last year and this season too. Ockimey represented Portland in the Eastern League All-Star Classic this past June. Through 88 games and 368 plate appearances he’s slashing .251/.370/.459/.828 with 14 HR, 53 RBI and 59 walks. On the other hand, last year he had 143 strikeouts in 131 games and this year he already has 108 K. 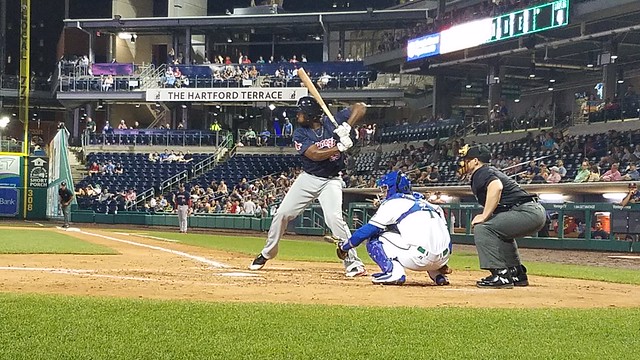 Bobby Dalbec was on 🔥 during the month of July, breaking multiple home run records and closing in on the Red Sox era career RBI record! pic.twitter.com/SXXpCrocGR

10. Travis Lakins, RHP (Preseason #14)
Age: 24, currently with Triple-A Pawtucket
I thought Lakins had a good chance to rise through the Sox minor leagues as a starter, but Boston’s brass seem to have converted him to a reliever, and the experiment has had positive results so far. Lakins sports a 2.61 ERA, very solid 1.05 WHIP and 42 K in 38 IP. He started the first 6 games of the year but has come out of the bullpen since the end of May. Lakins also recently earned a promotion to the Triple-A Pawtucket team. 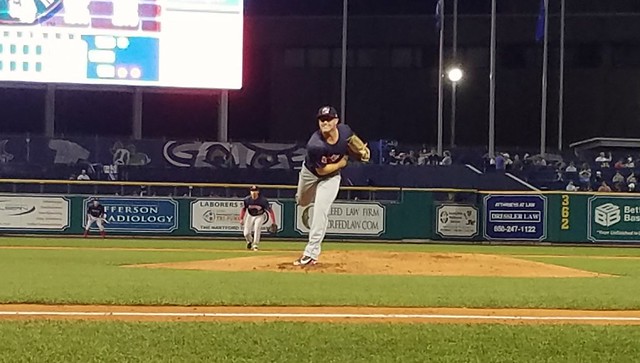 11. Darwinzon Hernandez, RHP (Preseason #18)
Age: 21, currently with High-A Salem
One of Boston’s top pitching prospects, Hernandez is grinding through this season in High-A following a decent season in Full Season A last year. The Venezuelan lefty is 8-5 in 21 games, with a solid 3.97 ERA and 106 K in 90.2 IP. One stat I really need to see improvement in to expect success at higher levels is a 1.48 WHIP.

12. Nick Decker, OF (Preseason N/A, drafted 2nd round 2018)
Age: 18, currently assigned to High-A Salem (on DL)
Twitter: @ndecker26
The 6’0, 200 lb. Decker was originally assigned to the GCL Red Sox but then on July 4th was assigned to Salem. He’s currently on the shelf with a left wrist fracture and hasn’t actually made his pro debut yet.

Pitcher Denyi Reyes (41) of the @GreenvilleDrive struck out eight in a seven-inning complete game to beat the Hickory Crawdads 4-1 on Wednesday, July 25, 2018, at Fluor Field at the West End in Greenville, South Carolina. (Tom Priddy/Four Seam Images) #MiLB #RedSox pic.twitter.com/vHvjtMv1RV

20. Roldani Baldwin, C (Preseason #27)
Age: 22, currently with High-A Salem
Twitter: @RoldaniBaldwin
Baldwin could be the next great offensive Red Sox catcher. Only 7 HR and 27 RBI so far in 53 games (202 AB) in High-A but many prospect evaluators are high on this 22-year-old from the Dominican Republic.

27. Esteban Quiroz, 2B (Preseason #43)
Age: 26, currently with Double-A Portland (on DL)
Quiroz was tearing the cover off the Double-A ball for a little while this April before getting injured and he’s been on the DL since. Quiroz was signed last November from the Mexican League. 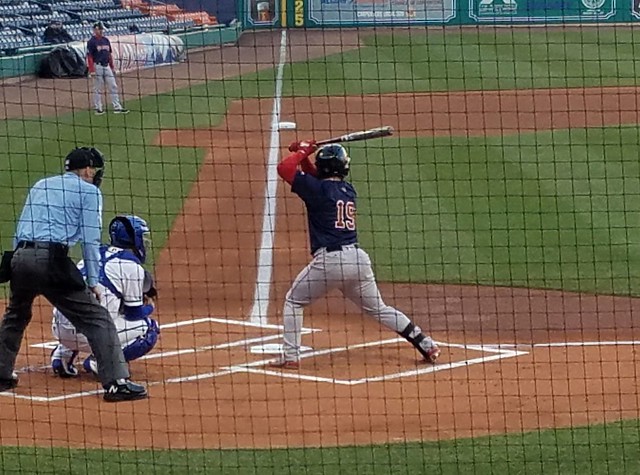 32. Chandler Shepherd, RHP (Preseason #39)
Age: 25, currently with Triple-A Pawtucket
Shepherd has shown a few flashes of brilliance, but my take is that time is running out for the 25-year-old to punch a ticket to the majors. He’s had a few 6 IP, 0 ER outings for the PawSox in 2018, in addition to a couple 7 IP, 0 ER performances. Overall his 6-7 record, 3.91 ERA, 1.35 WHIP and 77 K in 101.1 IP scream mediocre at best. Boston was looking past him when they promoted Jalen Beeks earlier this year and they may very well look elsewhere when the next call-up for a promotion or spot start is needed.

36. Eduardo Lopez, OF (Preseason N/A, international signing 7/2)
Age: 16, yet to make U.S. debut
Lopez was the highest ranked International prospect signed by the Red Sox this July. He was 20th on Baseball America’s Top 50 International list this past J2 signing period. He’s a switch-hitting center fielder who was 24th on the overall MLB Pipeline list of International prospects. Years away. Stay tuned.

41. Kervin Suarez, 2B (Preseason – Others considered)
Age: 19, currently with Full Season A Greenville
Suarez is putting together a solid season in A-ball following 2017 in which he spent most of 2017 in the GCL (Rookie league) and only 3 games with A- Lowell. In 89 games so far, 345 AB, he’s hitting .258 with 5 HR, 29 RBI and 19 SB. Here again though is a youngster who needs to get those strikeout numbers down. He’s tied for 3rd in the league (with Royals stud prospect, MiLB HR leader, Seuly Matias) with 121 K.

44. Marino Campana, OF (Preseason N/A)
Age: 20, currently with Full Season A Greenville
Power has come to Campana’s game this season. After 9 HR in his first 3 professional seasons, he’s swatted 15 this year in 91 games for Greenville, good for 6th place (tied with 2 others) in the SALLY league. His 60 RBI is 4th best in the league. Add to that 17 doubles, 6 triples and 2 stolen bases, we have a nice deep, sleeper prospect here folks.

47. Jhonathan Diaz, LHP (Preseason N/A)
Age: 21, currently with Full Season A Greenville
Seems that I am lower on Diaz than several other Red Sox prospect evaluators. I hope I’m wrong. The lefty started his season with 1 game in Salem (A+) and was then assigned to Greenville (A). A 3.55 ERA and 1.13 WHIP are solid ratios for a 21-year-old in 119 IP, and 120 K is basically a strikeout per inning. I want to see more mentions of stellar outings and some other prospect gurus tweeting about Diaz before I move him up into my Top 20 or 30, where MLB Pipeline (21) and SoxProspects.com (25) have him.

50. Hildemaro Requena, RHP (Preseason #34)
Age: 21, currently with Full Season A Greenville
Requena was a definite sleeper coming into 2018 based on his 11-3, 1.98 ERA 2017 season with Greenville, with much of that coming as a relief pitcher. Times have changed. He started this year in High-A Salem mostly as an RP (only 2 of 8 games started) and struggled mightily to the tune of 7.90 ERA in 27.1 IP. Since then he went back down to Greenville, has started 13 games and is attempting to right the ship (4-3, 5.04 ERA, 64.1 IP). Unfortunately his opponents are swatting .319 against him this year and his WHIP is not promotable at 1.67.

51. Luke Tendler, OF (Preseason N/A)
Age: 26, currently with Double-A Portland
Twitter: @the_FUTURE_22
I love Tendler’s Twitter handle so I had to include The Future as my bonus 51st prospect. I’ve had my eye on Tendler since the season started and I traded Francis Martes and a 2018 minors draft pick to Ben Wilson (@TBDubbs11) for Steven Duggar and Tendler in our Diamond Duos IV deep dynasty league. Boston selected him in this year’s Rule 5 draft so I got excited and thought he might be a major league body. That hasn’t worked out yet but he is holding his own in Portland. He’s hitting .254 with 10 HR and 45 RBI in 81 games. I’m starting to think Tendler’s ceiling might be one of those Bryce Brentz-type AAAA players.