Each week we pick the hitting prospect and pitching prospect from each level (AAA, AA, A+, A, and later in the season Short Season-A and Rookie league) who, in our opinion, had the best week. We are always on the lookout for candidates, so tweet us (@Prospects1500 or @PaulTheMartin) when you see a great performance. Thanks to @Baseball-viz and Keith Lott (@WeTlkFntsySprts) for providing MiLB statistics to assist in our determining the best hitting and pitching performances of the week.

As I was typing “Kyle Garlick” something in my brain said to write “Kyle Farmer.” Within my soul, I say that Garlick is just another Dodgers AAAA outfielder who will get his chance much too late. This week he decided to swing at every single thing, hit every single thing, and mash more than half of them outside the fences. Maybe one day the all power, contact, whiff profile of Kyle Garlick will make its way to the majors so we could see some of this power he has to display. He posted 17 HR the past two seasons and is easily on his way to yet another season close to 20. This could be the year the power is all too real. Hopefully, he gets his chance at some point whether it is for the Dodgers, or elsewhere because this week shows what the power could be at its peak.

Justin Dillon oddly made one start in High-A this week, and one in AAA, but both were very impressive. He was able to strike out over 50% of the outs he made in the A+ start, and strike out 10 up in AAA. The number of swinging strikes did not jump off the page, but he was able to paint the zone with 38 strikes looking. Something was working for the 24-year-old stocky pitcher. He somehow lost his one start at AAA without giving up one earned run, which is rough considering he only gave up 3 hits with just 1 walk. He has provided very mixed results over his short sample in professional baseball. This year is proving to be one that changes the minds of those who kept him far off prospect lists. The strikeout and walk rates are ridiculous at the moment, and maybe he found something to make him all the more enticing as a swing-and-miss starter.

Jose Rojas is way off the grid in a system that is not known for being strong. However, the second baseman was able to put up a stellar week that included a 7 RBI game in which he hit for the cycle. He has been incredible to start the season by increasing his walk rate from 3.2%-18.1% in just one offseason. This sensational skills leap may be what Rojas needs to get on more prospect lists. If the walks can become a legitimate skill, then the power and speed combination could be even more enticing for fantasy owners. He has been successful since being drafted without even taking a small percentage of the walks he has so far this year. The 25-year-old is a senior for AA but has only been in the league for a couple of years. I’m interested to see what this hidden gem may be able to produce over the course of a full season in the higher levels.

The Los Angeles Dodgers prospect has been absolutely off the charts this year. This week the batter turned reliever turned starter was able to put together a 6 IP start with 11 K and 0 BB. The command is where Santana has shined. His second start of the season with no walks also came with 21 strikes looking, 16 swinging strikes, and only 22 of 83 pitches falling outside the zone. He is kicking the notion that he is destined to be a reliever. The dominance was apparent and has been on display all season. If there were an award for early-year surprises, then Dennis Santana would be right up near the top. Not just because he has been truly astonishing to watch, but also because he is seemingly fixing everything that prospectors wanted to see him fix. The problems in his profile are disappearing with every start he makes. 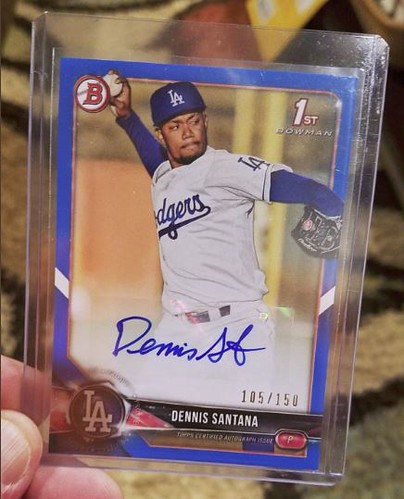 Carter Kieboom is easily the best prospect on the list this week. Part of an incredibly top-heavy Washington Nationals system that includes Juan Soto and Victor Robles, Kieboom gets a bit overlooked. That wasn’t the case after his offensive explosion this week. Gathering two hits a game over the last week was what we needed to see out of the shortstop who was struggling to begin the year. The biggest problem was the contact ability that was missing due to his increase in walks and power. Everything was able to come back together this week. Carter Kieboom is fully engraved in the plans of the future Washington Nationals but is nowhere near the supreme talent of Juan Soto, or maybe even Victor Robles. Kieboom is a shallow tier lower than those two names, but this week shows why he should easily be considered a top overall prospect that is known league-wide.

Bailey Falter is not a player I envisioned winning this award twice already. However, the production is undeniable at this point. He decimated a Daytona Tortugas lineup that includes the likes of Taylor Trammell, Jose Siri, Mitch Nay, Tyler Stephenson, and TJ Friedl. Falter did not do as his name would suggest by walking zero batters and striking out 11 over the course of 6.2 innings. He only gave up 2 hits on the night which is his 3rd such start of the season. It was his first eclipsing double-digit strikeouts, and also it was his first gathering over 10 swinging strikes with the 14 he induced. The big-bodied lefty is quickly becoming one of my favorite prospects due to his command and strikeout ability. The curveball may be set up as more of a whiff pitch with the success he has been having so this is something to keep an eye on throughout his promotions. 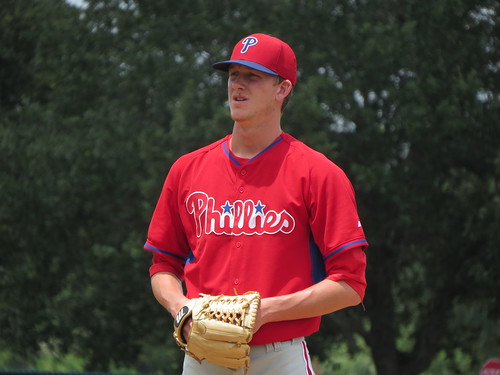 It was time to give props to a couple of teammates who had amazing weeks together. These two San Fransisco Giants were able to rack up 25 total hits in only 7 games. Manuel Geraldo is mostly known for his defense at shortstop but was able to impress with the bat and speed this week. Logan Baldwin fits the same description. These two defensive studs showed out with the tools by posting 2 HR and 6 SB. Opposing pitchers did not have a chance against either of these two who were the only bright lights in a rough Greenjackets lineup, outside of Heliot Ramos. They both fall pretty far off the radar, but defense is always highly coveted in the San Fransisco system. If they can somehow continue to produce as they have this week with their speed and contact skills, then they may find their way in more people’s minds.

Ryan Lillie is a draftee of the previous Miami Marlins regime who is performing well to start the season. This week he was able to dominate his two starts despite taking a tough-luck loss against the Greenville Drive. Even in that game, Lillie impressed by going 6.1 innings and striking out 8 batters. Over the two starts, he was able to accumulate a total of 23 swinging strikes. Nothing stands out with the prospect besides a decent slider that has future-reliever tags all over. However, the beginning of this year has brought success to the 21-year-old who has started every game he’s pitched. Last year he moved around the bullpen and rotation, but now it seems he will stick as a starter for the time being. He hasn’t walked many batters at all and is carrying a 19.7% SwStr% in his 7 starts. His survival as a starter could mean the slider and sequencing are turning into better skills. His command was fully on display this week and should provide him a solid base for a future in the rotation.