As a team the Montgomery Biscuits have been off to a slow start. They currently (as of 5/15/18) sit 9 games back of the Chattanooga Lookouts in the Southern League South Division. As a team they are batting .240 with an OBP of .319. On a brighter note they are leading the entire Southern League with 47 stolen bases in 59 attempts. On an even brighter note they have some prospects that are putting up great numbers through their first 38 games of the minor league season.

Nick Solak is continuing to prove why Tampa Bay Rays fans were happy to hear when he was acquired in a trade from AL East rival, New York Yankees. Solak is improving his 2B defense and in the outfield along with adding more pop in his bat. Add his improved plate discipline and it is easy to see why the Rays have been very high on him. In 129 at bats this year, the right-handed bat has 12 XBH (6-2B,2-3B,4-HR) with a walk rate of 12.3%. With Willy Adames knocking on the big league club’s door, that could create the Bulls to do some shifting of players and create a hole at second base for Solak to fill. 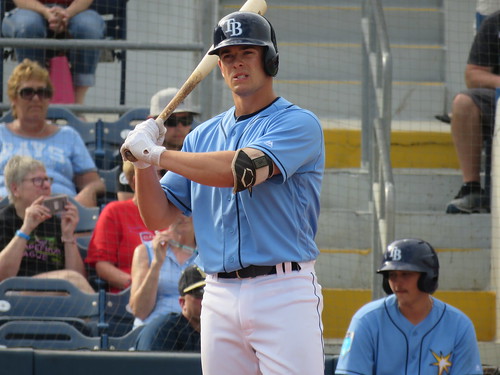 Nathan Lukes has been absolutely raking in his 107 at bats this season. His numbers against left hand pitchers is too small to note right now. However, they are very good but his numbers against right hand pitchers is worth taking note of. His slash line reads .350/.407/.550 with an OPS of .957. The left-handed RF only has 1 home-run to date, but he does have 12 doubles. I would feel safe in saying that his home-runs will be coming with more plate appearances. Lastly, I want to note that he has 3 stolen bases and has shown in past seasons he is capable of swiping double digit bags.

Brandon Lowe has been continues to steadily improve in all areas of his game. Lowe joined the Biscuits late last season after playing mostly with the Charlotte StoneCrabs in Advanced A ball. So far, his walk rate of 12.2% is up 6% from last year and his ISO .246, is up from .175 ISO last season. He has 18 XBH with 6 of those reaching the seats in the outfield. The lefty corner outfielder (mainly LF)  has shown better plate discipline, more power, and improved defense (been known as a liability in the field), shows positive development that will be keep the Rays and all of us deep dynasty players eyes on him.

Looking to get his career back on track, Zach Lee is doing so by putting up numbers that recently earned him the Southern League’s pitcher of the week. With 48 IP and 5-1 record, Lee has a 2.06 ERA and a 2.78 FIP. Lee, who is 26 years of age, was once regarded very highly as a prospect in the Dodgers system. So far this season the right hander K/9:7.31, BB/9:2.63 and HR/9:.19% are all heavy improvements compared to his career averages. Genesis Cabrera is still young (21) but showing signs of positive maturity when his turn in the rotation comes up. He is striking out an average of 1 batter per inning. The main area of concern would be his BB/9:5.11. Not only is the walk rate a concern because it is high, but his walk rate has increased year to year in each of the last 3 seasons. With his high walk rate, one reason he is able to keep his low ERA of 2.41 is because he is giving up only 0.41 home runs per 9.

About Aaron Schuck 10 Articles
I'm Aaron Schuck, covering all things about the Tampa Bay Rays minor league system. I currently live in Monticello, GA where I teach high school and coach basketball. Even though I coach basketball, please do not let that fool you that I'm only a basketball guy. My love for baseball is very strong. I will watch or attend a baseball game over a basketball game any day of the week. My goal is to provide our readers with interesting and informative information that involves everything in the Rays minor league system. Give me a follow on Twitter @bbbaseball101 and don't hesitate to contact me if you have any questions, comments or ideas on the Rays.

Read about Hudson Head, the headliner in the Padres/Pirates/Mets trade that brings Joe Musgrove to San Diego.