In my last post, recapping my time at the Baseball HQ First Pitch Arizona conference in Phoenix, I mentioned that I had a chance to take a look at Reds’ number 7 prospect (according to MLB) catcher Tyler Stephenson during the Arizona Fall League Fall Stars game. Reds shortstop prospect Jose Garcia and highly touted third base prospect Jonathan India also were playing in the Fall League but unfortunately didn’t make the Fall Star game roster.

Stephenson went 1-for-2 with a monster home run to center field, then later lined out to second in his second at-bat during the Fall Stars game. In 41 at-bats this Fall league season for the Glendale Desert Dogs, he hit an impressive .341/.413/.488 with a .910 OPS. In the mid-season update to my top 50 Reds prospects rankings, I moved him up into my top 10 thanks to his improved defense (he did a great job blocking balls in the dirt and nearly threw out a runner sliding into 3rd during the Fall Stars game) as well as the continued growth in his hitting, slashing .285/.372/.410 at AA, which is quite a feat since AA is typically the biggest hurdle minor league players have to clear  as they move up the ladder.

Other than 11 home runs at high A last year, the raw power hasn’t quite yet translated into games (only 6 home runs this past season, 11 in 2018), but in recent looks at him from video and when I saw him in Arizona, his swing path and strong arms are conducive to really lofting the ball, so I expect to see home runs jump for him next season. Additionally, he can hit to all fields, though most of his home runs more recently have been to the pull side, which you can see in this Prospects Live spray chart.. 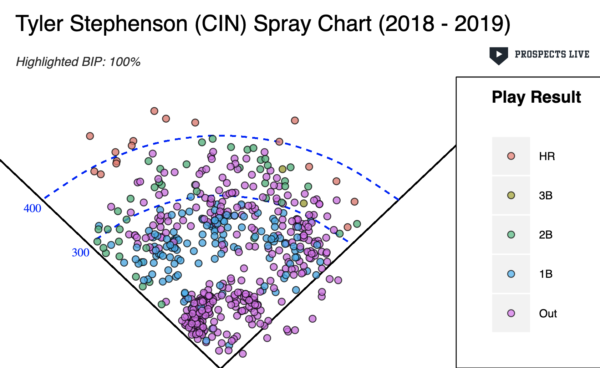 One of the breakout sessions I sat in on at First Pitch Arizona was a presentation on how to scout hitting prospects, in other words, what to look for in a prospect’s hitting mechanics. Wilson Karaman of Baseball Prospectus did a fantastic job of breaking down the keys to success when it comes to hitting. Based on what I took away from his presentation, I love everything about Stephenson’s upper and lower body motions before and during his swing, he’s doing everything right, from how he loads onto his back leg, to his hip rotation and how it stays in sync with his hands and arms, to his swing path; he has the swing mechanics of a guy ready to take on the next level.

Initially there were concerns among some scouts about Stephenson’s big frame (6’4, 225 lbs) and whether he can hold up long-term behind the plate but so far those concerns haven’t materialized as he hasn’t spent any significant time on the DL as far as I’m aware, and he looked comfortable when I saw him recently, and in the videos I’ve seen. Eric Longenhagen of Fangraphs noted that his pitch framing is still a work in progress, but that notwithstanding, Tyler Stephenson is a good bet to be a starting catcher. In fact, I’m willing to make the bold prediction that, if he continues to perform offensively and defensively like he has in the past two, three seasons and in the AFL, I feel that Stephenson will eventually take over starting catcher duties for the Reds and push Tucker Barnhart into a reserve role. That’s how much I’m liking what I’m seeing from him; same sort of feeling I had when I was tracking Aristides Aquino from AA to AAA to the majors. Kiley McDaniel of Fangraphs also had glowing reviews of Tyler Stephenson, assigning him a future value (FV) of 50, a rare thing for the catching position.

Scout on #Reds Tyler Stephenson, “Cincy had better hold on to him for a long time. That’s a legit bat right there.”

Rudie Verougstraete is the Cincinnati Reds correspondent at Prospects1500. He lives in Richmond, Virginia with his wife Shelly who is the Washington Nationals correspondent. He has been an avid baseball fan since 2015, participates in multiple fantasy baseball leagues, and attends Richmond Flying Squirrels (Giants AA affiliate) and Washington Nationals games whenever he can! His favorite baseball function is First Pitch Arizona, a fantasy baseball conference hosted by Baseball HQ every year just outside Phoenix.