No rest for the fantasy baseball crowd as 2022 drafts are already well under way. I just wrapped one up with NFBC in a 50s league. I like this format early in the offseason as it helps vet my ranker. So much so it has become an annual tradition for me. The 50s rules call for 12 teams and 50 rounds, 600 total players drafted. And there are no free agents moves or trades in season. The 50 players you draft are the 50 you have to work with the whole season. This is what’s called Draft & Hold.

Not only has this helped me with drafting in other formats, it’s become a multi-entry game for me. I really enjoy the drafts and it’s relatively low maintenance in season. Active rosters can be adjusted for pitching and hitting each Monday, and then you can change your hitters again for Friday-Sunday. And that’s it. So drafting depth to survive the season is absolutely key.

Below are some observations and thoughts on the NFBC 50s format and the specific draft I just completed.

Rounds 1-5:  The first couple of rounds of any draft are always fascinating to me. To see how the top 20ish players evolve year to year and also to begin seeing individual team strategies.

In this draft, SS’s were taken with the top 3 picks. Hard to argue with it and as a result I ended up with Vladdy at #6. A pick I was quite happy about. Should I have taken Ohtani here? Maybe, but I just couldn’t pass up one of arguably the two best pure hitters in baseball – Soto being the other. And I like Guerrero a tad better for 2022 given team context. Steamer loves them both.

Burnes at 9 is bold, no arguing what he is capable of though. I just lean heavily to offense for that first round pick unless I am at or very near the turn. Acuna at 10 is another player I was anxious to see where he would be drafted. Some reports have him possibly not quite ready for opening day, although we know he is already in the cage swinging. Until I see otherwise I am valuing him with only 10-15 steals for 2022. Figuring he will likely only run when situations call for it.

Pitching in the first 5 rounds, and throughout the draft, had a bit less premium than I expected (NFBC being notorious for pitcher helium). I’ll be curious to see if this is a trend or draft specific. Because of how the draft shaped I ended up taking 3 pitchers in my first 5 rounds, an approach that is not my norm. And I felt later on in the draft that there was still ample pitching depth so I may approach this differently if I have another draft that unfolds this way. Still, two elite hitters and 3 top 20ish pitchers in the first 5 rounds felt pretty good.

A few other thoughts here: Tucker has really moved up over last year, Bieber and deGrom drop a bit given health questions, Julio Urias in the 3rd puts a lot of value on those 20 wins (maybe rightfully so), Salvy will have to put up big numbers again to earn that 3rd rd pick (the difference to lesser catchers could be dramatic again), I’m a Franco fan and anxious to see what a full season will bring, and the 5th rd felt like it was where picks became much more team specific – it really could have unfolded any number of ways.

Prospects: Recent seasons have taught me not to expect as much production from rookies as I would like to think there will be. There are certainly exceptions to this.  The allure of a prospect coming out on fire ala Soto or Tatis is impossibly tantalizing for most of us. This season Bobby Witt Jr. is at the top of the list. He looks to have early playing time and all indications are he will come out strong. But we felt that way about Kelenic last year, so what to do?

My approach, for the most part, was to wait until rounds 32+ to go after guys not named Witt, Tork, or Jung. Those three will definitely go early and did in this draft with Witt in the 8th, Jung in the 22nd, and Tork in the 24th (it was me). Once in the 30’s players like Gil (31st), Miranda (32nd), Ed Cabrera (36th), Josh Lowe (37th), Bryson Stott (38th), and Roansy Contreras (40th) do get interesting. In this particular draft prospects were going lower than they had in the previous 3 NFBC 50’s that were included in the ADP when we started.

Player Versatility: Attrition due to injury, bad play, demotion, or whatever, can cripple a team quickly. I approach each 50’s draft knowing I need at least 4 players qualified at each non OF, SP, RP position. So the more quality multi-position players I can draft the more room I have for pitching depth, outfielders, or rookie flyers. After the first 4 to 5 rounds I begin putting a premium on guys like Jake Cronenworth (10th), Chris Taylor (12th), Enrique Hernandez (20th), and Abraham Toro (20th).

Playing time: Platoon type players can be great in a league with daily moves. In this format, they can cost valuable at bats and counting stats. Here I heavily prioritize a clear path to full time roles and feel most platoon players should be skipped or late picks only. Judging by every draft I am in, this is not a consensus opinion. For me, this tends to create opportunity in the draft.

Pitcher Workload: Understanding what type of innings yield we might get from a pitcher has become increasingly important. Particularly in the NFBC 50’s format where we don’t have the opportunity to replenish our arms through free agents or trade. Quality high inning guys should get extra value and going at least 12 deep in starting pitchers is a must. Who we have available and choose to start at SP each week becomes a key component to team success.

SP vs. RP:  I went into this draft with the idea I would lean more towards relievers than I have in the past. Many are generating impact stats, have substantial inning counts, and they can be used effectively to fill in weeks where you have tough SP match ups or are down starters. Yet,  despite that plan I only had 3 relievers drafted through the first 41 rounds. The reason, other players had the same idea and many SP’s ended up being value picks later in the draft. My final count was 15 SP’s and 6 RP’s. A 29 to 21 split hitting to pitching.

The Injured: We’ve discussed deGrom and Bieber. Trout went in the 2nd at 14 overall, which could be a value if he plays even 130 games. Mondesi (4th), McCullers (11th), Rodon (11th), Severino (11th), Verlander (12th), Hoskins (13th), Clevinger (14th), Thor (15th), Kershaw (18th), Voit (24th), and Eflin (31st). There was also Strasburg who just kept drifting in this draft, no one knew what to make of him for 2022. Steamer has him at 26 starts with productive numbers. Thoracic outlet surgery is a big deal though, so no one really knows how this will go. He went in the 30th round in our draft, not a lot of risk for the potential return there.

Big Question Marks: Yelich went in the 9th, which seems like it offers some upside. Steamer has him at a 120 wRC+ and productive counting stats. Ozuna in the 26th could be a bargain given he is now available for all of 2022. And Trevor Bauer (30th) certainly has his own issues.

That’s it for now. Let’s stay positive while the owners and players get this thing worked out.  It’s business – and baseball season can’t get here quick enough! Follow me on Twitter @M_Caplan for continued NFBC updates. 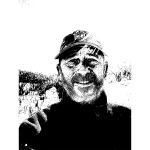 Traveling the country watching baseball - sharing thoughts and videos along the way.