The Kansas City Royals prospects play for the Surprise Saguaros. The Royals sent eight prospects – four pitchers, one catcher, two infielders, and one outfielder. The group is a mix of top prospects, former top prospects, and some under-the-radar names.

Asa Lacy, LHP: Age 22 (Highest Level – High A)
2021 Stats: 14 G, 51 IP, 30 ER, 41 BB, 79 SO, 5.19 ERA, 1.58 WHIP
Lacy is the Royals’ prized prospect in the Arizona Fall League. His professional debut in 2021 was a mixed bag and the fall league is a chance for him to improve on some of his command and control issues. I see a lot of people out there saying it was a disappointment of a season or that he didn’t live up to expectations. Sure, you want to see better numbers out of your first-round, fourth overall pick, but Lacy is still just 22-years-old and there were good signs throughout the season. The biggest positive is that he was striking out batters 33.3% of the time. That lets you know his stuff is as elite as expected when the Royals took him in the 2020 draft. I know the expectations are high, but I still have confidence that Lacy will adjust to pro ball. He was shut down in July with a shoulder injury so he is also working his way back from that. Lacy’s debut in the Fall League was a good one. He went two innings, allowing just one hit, walking one, and striking out four. Don’t give up on Lacy just yet. The stuff is still there to become an elite starter.

Zach Haake, RHP: Age 25 (Highest Level – High A)
2021 Stats:- 15G, 53.2 IP, 20 ER, 23 BB, 58 SO, 3.35 ERA, 1.17 WHIP
Haake is the prospect I was most intrigued to see head to the Arizona Fall League. Haake was drafted in the sixth round of the 2018 draft and was part of the arm-heavy draft class that included the likes of Brady Singer, Jackson Kowar, Daniel Lynch, Kris Bubic, Jonathan Bowlan, and Austin Cox. He was stellar in his 2018 debut pitching to the tune of a 1.75 ERA between rookie and rookie advanced. He was off to a great start during the 2021 season in High-A for the Quad Cities River Bandits. He carried a 3.74 ERA while striking out 47 batters in 45.2 innings until he missed roughly six weeks with an oblique injury. The Fall League will be a great opportunity for him to bounce back. In his latest start, he went 3.1 scoreless innings. His fastball sat in the mid-90s and he was mixing his offspeed pitches very well, impressing a lot of people. Haake is a name you will want to keep on your radar in a Royals prospect system already loaded with arms.

Luca Tresh, C: Age 21 (Highest Level – Low A)
2021 Stats: 16 G, 12 H, 4 2B, 1 HR, 8 RBI, 5 BB, .226 BA, .293 OBP, .358 SLG, .652 OPS
Tresh is a 2021 draft pick and it is rare for a player to attend the Fall League in their draft year. Tresh was taken in the 17th round and signed for above-slot money. While catching at NC State, Tresh was a bit overshadowed by his counterpart and Giants 2020 first-round prospect Patrick Bailey. He got off to a scorching hot start in the Arizona Complex League, slashing .389/.421/.722 with a 1.143 OPS. He was quickly promoted to Low-A but struggled to adjust to the competition in a small sample size. Tresh has some fun raw power and a really good arm behind the plate. The Arizona Fall League will allow him to improve his hit tool against some really good competition.

There’s crushed, and then there’s whatever Seuly Matias did to this baseball in the ninth inning.#RoyalsST pic.twitter.com/X6X6YSt4Jk

Stephen Woods Jr., RHP: Age 26 (Highest Level – AA)
2021 Stats: 22 G, 39 ER, 45 BB, 48 SO, 7.42 ERA, 2.20 WHIP
It seems like forever ago that the Royals took Stephen Woods, Jr. in the 2019 Rule 5 Draft. Ultimately, the Royals decided not to keep Woods, Jr. and returned him to the Rays, eventually trading for him to keep the rights to him. Before the 2021 season, Woods, Jr. had dominated the minor leagues but he struggled this year compiling a 7.42 ERA and 2.20 WHIP. Most of the struggles have been related to command issues which could be seen in his 18.8% walk rate and 6.42 BB/9 this season. The bright side is that he has been known to be up to 99 mph with his cutter (sits in the mid-90s) and pairs it with a plus breaking ball. If he can just gain a little bit more consistency with his control, there could be a serviceable reliever in there.

Two runners on and Stephen Woods Jr. strikes out back-to-back hitters to get out of the inning!

Mitchell Ellis, RHP: Age 26 (Highest Level – High A)
2021 Stats: 30 G, 54 IP, 29 ER, 21 BB, 62 SO, 4.83 ERA, 1.46 WHIP
Mitch Ellis seemed to be a late addition to the Arizona Fall League for the Royals. The right hundred signed out of Australia in February 2020. At the time, he was pitching for the Melbourne Aces in the Australian Baseball League. The 26-year-old spent most of the 2021 season pitching for the Quad Cities River Bandits in High-A. He compiled a 4.83 ERA in 54 innings while striking out 62 batters in 54 innings between Low and High-A. He served mostly in a relief role and that probably is where his ceiling is at. 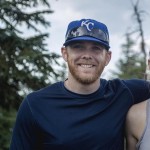