LA Angels’ Chris Rodriguez had right capsule repair surgery on November 8th, subsequently shutting him down for the majority of the 2022 MLB season. His surgery ends a frustrating sequence of events, starting at the beginning of the 2021 season.

Drafted out of high school in the 4th round of the 2016 MLB Draft by then-GM Billy Eppler, Rodriguez and his howitzer for an arm started gaining traction due to his raw, tantalizing stuff. His scouting report has always sparkled with endless upside for a big, bright future.

In only two years’ time, the righty’s arsenal mimicked a video game. 95-97 MPH 4-seam FB with über life, a 2-seam FB that broke-in on righty’s with the same velocity as his 4-seam, shattering bats and hearts alike, followed by a changeup that scouts initially believed was a screwball due to its ridiculous movement, as if that wasn’t enough, Rodriguez’s goody-bag also came equipped with a 12-6 curve and an 82-85 MPH slide-piece with enough spin to create a good amount of depth and tilt.

The hurler’s reputation was beginning to reach all of baseball. Needless to say, the kid’s stock was on the rise.

When a pitcher is drafted out of high school, in the earlier rounds of a draft, there’s typically a higher level of care, preparation, and expectations that are laid upon both the organization and the prospect. Chris Rodriguez and the Angels were no exception.

The decision to draft a player – after all the vetting processes are complete and all the tape has been watched – inevitably comes to a belief. Does the boss believe in his investment? Especially when that investment will knowingly take time to bring back returns.

Billy Eppler and his staff believed in Chris Rodriguez. So much so, they signed him for well above his slot value, at $850,000.

By 2020, Rodriguez needed to ramp up his stamina. Thus he devoted himself to pitching 70 innings. However, the universe had other plans for Rodriguez and the rest of the world in 2020.

Instead of throwing 70 innings at Double-A, a level he had not reached yet, the right-hander was relegated to “simulated baseball” and scrimmages.

Technically, Rodriguez got in his “70 innings.” Having said that, any baseball person knows that the difference between simulations, scrimmages, and actual baseball is so vast, those 70 “innings” aren’t real.

Regardless, the reports back from the alt site were quite positive. Rodriguez’s hard-working nature and talent equaled vindication to Eppler and the Angels. In other words, Chris Rodriguez was ready to start making his returns.

Yet again, however, the universe can be brutally objective when it comes to change.

Things in sports, and in life, change so quickly. Billy Eppler was fired immediately following the 2020 season. Perry Minasian was hired. And thus, we’re presented with the Chris Rodriguez paradox.

The organization with which Rodriguez entered into via 2021 was/is – Minasian’s Angels. The difference(s) between the two versions is drastic. Both in the literal and figurative sense. Yet some similarities remain.

The most important resemblance is that both versions have equal power over Chris Rodriguez’s life, both in the short and long term. One version: he’s the golden goose, the other: he’s an expendable commodity.

For example, Minasian saw it fit to fix the Angels’ anemic rotation. Fine in theory, tougher in execution.

Upon signing both Jose Quintana and Alex Cobb in the offseason, Minasian’s Angels now had a 6-man rotation with Jamie Barria floating around like Slimer from Ghostbusters.

The last thing the Angels needed was more pitching volume.

Instead of sending Chris Rodriguez to Double-A to firm up his physicality, stamina, and longevity, Minasian saw it fit to throw the righty straight into the fire and directly into the Angels’ bullpen. His MLB debut came on April 2nd, 2021.

Allow me to explain the severity of Minasian’s decision. Chris Rodriguez had amassed a grand total of only 77.2 innings pitched throughout his professional career. Back surgery cost him virtually two full seasons.

Thus, Rodriguez hadn’t pitched more than 10 professional innings between 2018 and 2021. Minasian still decided it “best” to bring Rodriguez up to the highest level. There he would eventually place more strain upon his body than he ever had at any point in his life.

Without the proper preparation, our bodies will eventually give way to excessive pressure and exertion. The magnitude of distance between throwing simulations and facing late-inning MLB hitters is incomprehensible. But, Rodriguez did the impossible. Due to the man’s integrity, grit, and guts, he dealt in his first appearance. Two innings’ worth of pure filth at the highest level. And he’d continued to deal, inevitably becoming the Angels’ setup man.

That was, of course, until he hit the IL with “shoulder irritation” less than a month later. That same shoulder, with the same “irritation,” would go unaddressed for months. Eventually, it lead to his surgery this November. And he pitched all the way through.

After his initial IL stint, Rodriguez wasn’t ever the same. I could recap the chain of events leading to his eventual surgery but his shoulder issue wasn’t addressed.

And throughout this entire nightmarish ordeal, the pitcher gave all he had to both of the Angels’ organizations he knew.

The day Eppler got fired Chris Rodriguez’s value plummeted. The worst part? Rodriguez had nothing to do with it. Eppler was no longer present. Therefore the “belief” mentioned earlier left with Eppler himself. Instantaneously, the “ace of the future,” the homestyle righty with the golden arm became a commodity.

I wish Chris Rodriguez a safe recovery. Typically we say “speedy recovery.” I just want the guy to come back whole again. 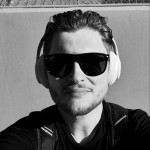 I'm Nate Eckert, born and raised in Seattle, WA. However, I've been an LA import for the past 12+ years. I love the Mariners and I love the Dodgers equally, like a father's love for his children. My ultimate baseball dream is to watch my kids square-off against one another, in what would only be celebrated as the Mariners' very first World Series appearance. And then BOOM!! Ken Griffey Jr. is 19 again!! Let's PLAY BALL!!