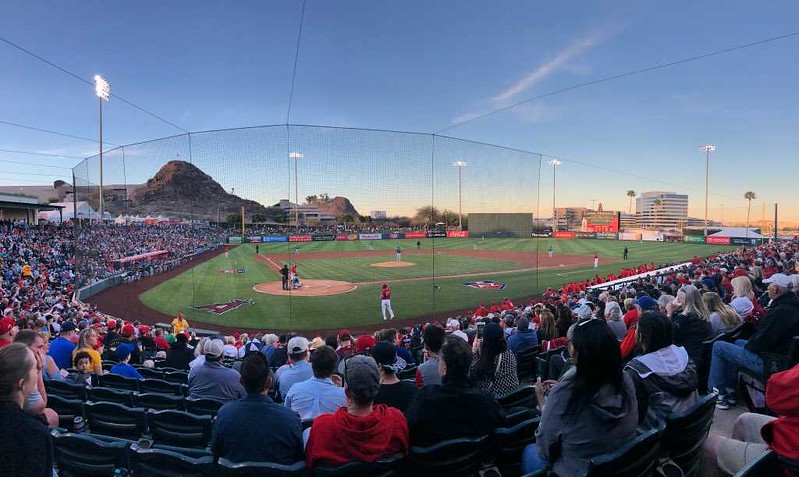 The Angels farm system has significantly improved in the last few years thanks to new front office regime that has transformed much of the farm system. For the first time in years, the backfields in Tempe, Arizona were littered with intriguing upside players, many of whom were acquired by the new front office.

Back-to-back strong drafts and a stronger international presence has led to many intriguing lower-level prospects. I had the chance to check out many of these prospects earlier this week and was lucky enough to catch a few games. Here are the main takeaways from Angels camp.

Brandon Marsh continued to show why he’s a potential impact major league outfielder. Marsh is growing into his body and flashing loud tools at the plate, while impacting the game defensively. His swing produces loud, hard contact geared towards getting the ball in the air or on the line. After mashing Rookie Ball last year (.350/.396/.548 line in 39 games), Marsh is ready for a taste of High-A Ball. Marsh also made an appearance in the big league game vs the Los Angeles Dodgers on Thursday night, flashing his plus arm when he gunned down a runner at home plate.

We have #Angels No. 5 prospect Brandon Marsh's arm as a 60. What say you?
Grades, scouting report, video and more on the @Angels' Top 30 list: https://t.co/ysW3AyIqrd pic.twitter.com/gvMLN42EaT

Griffin Canning was shut down immediately after being drafted last year, due to a shoulder scare that swayed teams away. He came into this spring fully healthy and made his second appearance Tuesday, where he put on an absolute display. Canning consistently flashed a plus 94-96 mph fastball, a plus 79-83 mph hammer curveball and an above-average 86-90 mph slider/cutter, commanding all those pitches in the process. There were many oohs and ahhs from the players and scouts present for Canning’s appearance.

No change-ups in his first inning pic.twitter.com/hoDdadetA8

Jahmai Jones continues to impress many Angels officials and his attempt to play second base will add versatility to his skill-set. An Angels official said Jones has shown the athleticism and ability to handle second base, albeit with some stiffness due to lack of reps at the position. With impact potential at the plate, in the field and on the bases, added versatility makes Jones much more intriguing.

Kevin Maitan is noticeably thinner but he is still a bulking 18-year-old who is very unlikely to stick at shortstop. The Angels plan to keep him there in 2018 but his lateral speed and actions at the position are sloppy. At the plate, Maitan flashes easy raw power from both sides of the plate but an irregular hand load leads to timing issues that sap some power. The tools are there for Maitan to be an excellent hitter but mechanical issues will need to be tweaked for him to reach a high level.

Jesus Castillo was viewed as a small return in the deal that sent Joe Smith to the Chicago Cubs in 2016. Since that time, however, Castillo’s stuff has seen a slight uptick and the command of his stuff has stayed strong. Castillo gets by with a 89-92 mph fastball but generates very strong running action with the pitch. He complements the fastball with an average breaking ball and below-average change-up. Castillo may be a MLB option in 2019.

Jerryell Rivera, the Angels 2017 11th round pick, looked extremely good in his bullpen session on Tuesday. Rivera is extremely projectable with loose arm action, coming at hitters from a long and lean frame. The left-handed pitcher sits 86-91 mph on his fastball and his arm action should lead to a workable change-up and a breaking ball, which are below average at present. A scout I spoke to said Rivera, along with Jose Soriano, are the most impressive lower-level arms in the system.

Right-handed pitcher John Swanda has some impressive traits that could allow him to stick as a starting pitcher. The 2017 4th round pick is an extremely good athlete who has a simple delivery and arm action that could lead to developing off-speed stuff. With a heavy 89-93 mph fastball and breaking ball feel, the foundation is already there for a prospect of interest. Swanda’s arm action should produce a workable change-up in the future, a pitch he admitted he is really trying to work on.

Jo Adell, the superbly talented outfielder and the 10th overall pick in the 2017 MLB Draft, dealt with a hand issue that kept him out for a few days. He had a light batting practice session Tuesday and was playing in live games again a few days later. A player I spoke with said Adell displayed the best power he’d ever seen and Adell allegedly hit a 475+ foot home run during game action earlier in camp.

Livan Soto flashes above-average across the board defensively. He should be able to stick at shortstop long-term. The bat is well behind at present but he shows enough at the plate that he could eventually be a useful hitter.

Trent Deveaux has already matured a bit since signing out of the Bahamas last summer. He is a super athlete who projects as a plus defender and runner who also showed some feel for barreling baseballs in the cage. He’s mechanically raw at the dish but there is some thump in the bat. Many scouts are already lauding how good Deveaux looks this spring.

18-year-old Hector Yan‘s bullpen session featured loud noise from an explosive 92-96 mph fastball but Yan showed a mess of a delivery and inconsistent feel for his other pitches. A lefty with a firm fastball is a good starting point but the rest of the package needs improvement.