Well this is shocking.  But shocking in a good way.  Stock up on his baseball cards now if you haven’t already! 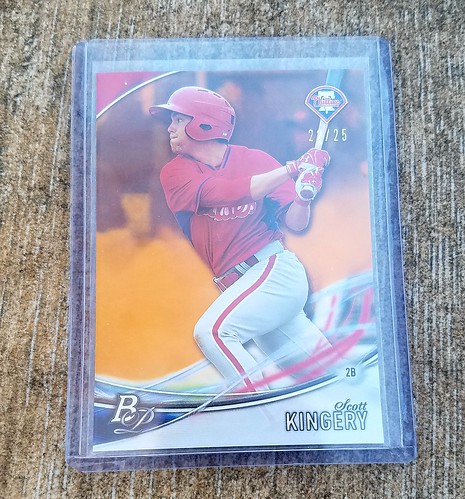 The Phillies announced today that their top prospect, Scott Kingery, has made the major league squad out of Spring Training.  Not only did he make the team but it was also announced that they signed him to a 6-year deal that will pay Kingery a guaranteed estimate of $21m along with 3 years of club options in years 2024,  2025 and 2026. Kingery is only the 2nd player to sign a deal without playing in the majors since Houston signed former Phillie Jon Singleton to a long-term deal four years ago. Evan Longoria signed his deal after about a week in the major leagues.

Kingery was drafted in the 2nd round in the 2015 draft out of the University of Arizona.  During his three college years, he hit 6 home runs, stole 38 bases and had a .351/.425/.484 line in 547 at bats.  At the time he was drafted, Kingery was compared to former Phillie Chase Utley for their style of play, their position and their statistics.

Kingery put up good numbers during his first two years in the minor leagues and made the Florida State League All-Star Team in 2016 and was a Double-A All-Star and on Baseball America’s Minor League 2nd All Star Team in 2017.   Kingery also showed great prowess with his glove winning a Rawlings Gold Glove after his .989 fielding percentage led all minor league 2nd basemen.

It was last year, however, when Kingery really broke out as he hit 26 home runs along with 29 stolen bases to go along with his .304/.359/.530 slash line in 543 at bats between Double-A and Triple-A.   He showed the speed he had in previous years but the power seemingly came out of nowhere.

He is expected to serve in a utility role to start the year, moving from 2B to 3B and even some outfield or 1B.  There are a few ways that he could garner a full-time role at one steady position. For example, if Maikel Franco’s struggles from last year continue, Kingery could overtake and replace him.  There could be an opportunity at shortstop if the team decides that new starter (and fellow prospect) J.P. Crawford needs more minor league seasoning. The team also had offers over the winter for current second baseman Cesar Hernandez.  Even in the outfield there could be an opportunity for playing time. Odubel Herrera, Aaron Altherr and Nick Williams are young and untested. Herrera had some struggles last year and Altherr had some injuries in the past.

While there could be some struggles to adapt to major league pitching, there is no denying the excitement that Kingery’s speed, power and glove bring to the team.  Also, his versatility is an added plus. As for the contract, it’s a fair gamble on both the player and team’s part. If he performs well, the team has a cost-controlled player during the time of the contract.  If he doesn’t play well or gets hurt, he is still guaranteed a ton of money. The Phillies have been preaching they will “be bold” and this move confirms that stance.

About Tony Bps 55 Articles
Tony Bps Spina is a lifelong baseball fan hailing from the City of Brotherly Love - Philadelphia! Tony has loved baseball since 1980 and has followed the Phillies through good and bad times. Tony is married with 3 kids and works for a financial institution but has enough free time to play in 20 fantasy baseball leagues with 75% of them being Dynasty Leagues. He lives a few blocks away from Citizens Bank Park and attends many Phillies games per year in addition to their minor league teams in Lehigh Valley and Reading. He can be reached on Twitter at @TonyBps1.