Until about a week ago I was merely a fan and/or a follower of Prospects1500. Now that I’m on the inside, I can already say in full confidence that I’ve successfully “married-up.”

I began sportswriting with Dodgers’ Way (https://dodgersway.com/author/neckert/), a derivative of FanSided, in August of 2018, as their prospect specialist.

Covering an organization such as the Los Angeles Dodgers is a privilege and an honor. I’m extremely grateful to have successfully parlayed the experience I gained from writing with Dodgers’ Way into an opportunity now with Prospects1500, I could not be more excited to begin.

The sheer breadth of content alone is staggering. The amount of passion and respect the staff of Prospects1500 has for baseball, prospects, and its teams, is evident in every article written.

Now that I’m a part of the team, I will do everything in my power not to infringe upon the well-laid foundation set before me.

What I Bring to the Team-

For the readers out there, I will be diving very deep into the Dodgers’ always-relevant and annually leading farm-system throughout my time with this site.

I’ve continually studied and analyzed the Dodgers’ system over the past 5 seasons. I confidently endorse my ability to scout players.

Whether it be through the utilization of at game observations, tape, analytics, sabermetrics, backstory, inside information, or plainly-my gut instinct-scouting is easily my favorite part of baseball.

Any “Novices” Out There?-

If there are any readers who feel like they aren’t that informed on baseball or prospects or any MLB system (let alone the Dodgers’), I say to you, “welcome!”

As a graduate of Philosophy, twice (BA and MA degrees), one of my favorite aspects of writing is to explain a seemingly difficult concept (like, why the outfielder didn’t hit his cutoff) to someone who may have no experience with the concept of baseball (in this scenario) whatsoever.

It’s a crazy notion by itself. To take someone with zero prior knowledge of baseball and perhaps over the timespan of only an article’s length, teach them the fundamental concept(s) behind hitting cutoffs? Get outta here! But it happens all of the time.

To teach something to someone through the power of only written-word is, if nothing else, inspiring.

However, before we get too philosophical, please allow me to introduce myself a bit more personally. Please, allow me…

Born and raised in the Greater Seattle area, I was blessed to grow-up with announcers Dave Niehaus and Rick Rizzs.

Going to the Kingdome (yes, the Kingdome) was like going to Disneyland every time I walked through that seemingly endless, twisting, walkway turned transcendental abyss. Wondering when on earth will we ever get to… BOOM… that bright blue ocean of insta-magical ASTROTURF. Bluer than any blue my eyes could ever conceive!!

Until my senior year in high school, the Kingdome was all we had. To me, it was everything. The Plexiglass-plated walls in the outfield, the Starbucks and Boeing signs, the nightly firework shows after every Mariner home run (which, by my approximation, took a solid 7-8 years off my life, due to the NINE homers a game the M’s averaged in the mid-late 90’s in the Kingdome) and, well that’s it. But it was my everything.

My dad was always great about getting us to games. We were in attendance the night Mark McGuire took The Big Unit deep, so deep that the ball actually hit off the back end of the concrete Kingdome wall, past the second deck in left-center. We saw Bo Jackson, in his prime, hit the speakers atop the dome’s ceiling. And we watched in sheer horror during Griffey’s “Spider Man catch” in 95. The one which cost him half of the regular season.

We attended roughly 25 games a season from 90-98. Ken Griffey Jr. in his prime. Edgar Martinez in his prime (greatest right-handed DH of all-time). Randy Johnson as nasty as ever. And a supremely talented (and handsome) rookie named, Alex Rodriguez. We were so utterly spoiled.

To the City of Angels-

I must admit that I wasn’t a Dodgers fan before I moved to LA. I didn’t particularly like the National League, let alone the NL West. I wasn’t overly thrilled in any real capacity about the Dodgers.

But these things have a way of changing.

After watching a few games through the lenses of any local broadcast the viewer (you) instantly gets an ‘inside scoop’ of the organization in a way that’s literally impossible through a national broadcast. This is why I love MLB.TV. The games (99.9% of the time) are locally broadcast and you can choose your own derivation.

Of course in LA, the podunk “local broadcast” used to star (arguably) the greatest announcer of all time, Vin Scully.

It was a winning season, in fact, my first year in LA was the beginning of ‘Mannywood.’ There was a ton of hype around the Dodgers, Manny Ramirez, and the playoffs. Plus, my actual job (the same job that brought me to LA) was selling Dodgers’ ticket-packages to businesses throughout LA. Like it was meant to be.

Fortunately at the time the Dodgers were a hot ticket. I had to go to Dodger Stadium, eat a ‘Dodger Dog,’ have a beer, and watch Larry King (and his wife) leave his seat while I screamed “LARRY!” He just smiled and confidently nodded at me like “yeah kid.” Sitting in the warm, surrealistic wonderland of Los Angeles, I thought to myself, “I’m never leaving.”

The omnipotent combo of a) going to Dodgers’ games and b) listening to Vin Scully broadcast games while c) simultaneously falling victim to his effortlessly Shakespearian bedtime stories, the hook, the line, and the sinker had all been set.

Los Angeles has that sort of pull on people without Vin Scully. Now imagine it with Scully! I am only one example amongst a city of 4 million.

I tell people that the Dodgers are my NL team and the Mariners are my AL team, which works well until they inevitably meet in the World Series. It has to happen at some point in time. Right? 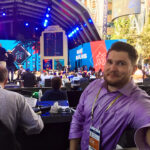