Owen Miller is not a secret if you follow Padres prospects. Now that he has had his first Bowman baseball card released, the third-rounder shouldn’t be a secret to anyone.

As of May 29th, Miller was hitting .349 over his last ten games with two home runs over the weekend. The third-rounder has been very consistent, hitting .335 across two levels last season and currently sitting at .309. While he hasn’t demonstrated a ton of power, Miller hits home runs just often enough that you know he can do it, plus it’s no secret that power is often developed later. Miller’s consistency at the plate is not only evidenced by his MiLB numbers. He never hit below .325 in college and hit .384 his final year. In 9 MLB Spring Training at-bats he recorded three hits including a home run to tie a game against the Mariners in the bottom of the 9th.

Owen Miller comes up clutch against the Mariners in Peoria! 🙌 #PadresST pic.twitter.com/Zlpi9FVrHb

The Padres have no reason to rush Miller, considering he’s blocked at shortstop by Fernando Tatis Jr., Luis Urias, and Manny Machado, and the organization’s unwavering commitment to Ian Kinsler means the organization has no motivation to try him out at other infield positions, but there is room for Miller in Triple-A. Currently the El Paso Chihuahuas do not have a single infielder listed as a shortstop. Urias has been playing tons of shortstop to fill that void, which is curious because his future is second base for the Padres. It would make sense for Miller to be promoted to Triple-A to play shortstop full-time while Urias plays second base full time, but it appears the Padres have a specific timetable in mind. I would not be surprised to see the promotion shortly after the Double-A All-Star Game, unless it’s done in conjunction with an Ian Kinsler DFA and Luis Urias promotion. I do not see a scenario where Miller makes a fantasy impact in 2019, but he is absolutely worth holding in deep keeper leagues.

Quick stat while were in the rain delay: 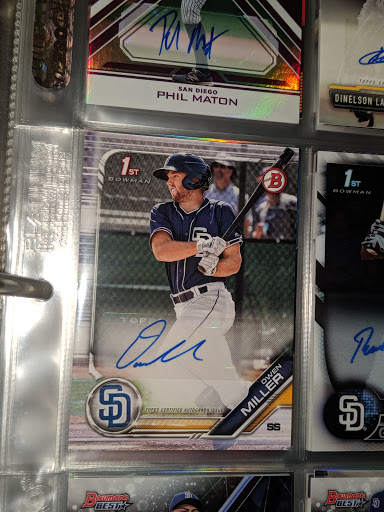 Back to that 2019 Bowman baseball card. I was lucky enough to pull one in my second 2019 Bowman Blaster box, but if you want one they’re very inexpensive on eBay. Serial numbered, autographed parallels in the /99 – /250 range have been selling for in between $4-7 for buyers willing to be patient and stick with the auctions. His Buy It Now prices are consistently higher. If you’re willing to be patient and wait for the right auction then he’s a solid investment, given recent sales data and his remarkable consistency. I would describe his hobby ceiling as fairly low but he has very realistic upward mobility.