Careers do not go on forever, despite what some fans wish. Without a doubt, the present Cubs roster is aging. Subsequently, this is how the roster may look in the future. Remember, this is a prospect-centered look. Some variation will occur with trades, free agent signings, and some members of the current roster retained.

The 2020 season proved to be a bit of a disappointment for the Cubs in terms of developing Chase Strumpf. The front office had hoped to fast-track the 2019 second round pick out of UCLA. Nonetheless, those ideas were scuttled along with the end of the MiLB season. The Cubs liked the 22-year old’s power potential, and felt he would fit right in with the present major league line-up. A big concern for Strumpf is defense, were he was considered an average second baseman at best. Therefore, a move a position to the left would keep his bat in the order while allowing better defenders to play second.

The Cubs value versatility in their roster, and they have that in Pedro Martinez. A switch-hitter, the 19-year-old was originally a shortstop, but has also seen time at second and third base. Signed out of Venezuela in 2017, Martinez has been incredibly consistent at the plate. In the same amount of games over the past two seasons, Martinez produced almost identical results. Martinez now has a lifetime slash line o f .310/.393/.422/.815 with 50 stolen bases and 49 runs driven in.

Scouts Chicago-area native Ed Howard is considered a top-flight defender, with smooth actions around the keystone sack, a strong arm, and the athleticism to make the highlight reel play. The Cubs’ first round draft pick in 2020 has the advanced skills to progress rapidly despite being only 18-years-old. At 6’2″ 215-pounds already, Howard has the size and the stroke to provide plenty of pop. Nevertheless, Howard may need to work on his swing. Many are encouraged by Howard’s quick hands and bat speed. Howard is also considered to be a plus base-runner.

In his second year north of the border, Luis Verdugo blossomed at the plate. The native of Mexico was able to keep his batting average steady, while learning to drive the ball in the second half of the year. Verdugo hit all of his home runs in the final month of the season. The 19-year old is considered one of the premier defenders in the system. He will battle with Howard over the shortstop position, with the “loser” moving over to third.

Miguel Amaya can almost be considered a default at this position. The Cubs would prefer left-handed power hitters Ethan Hearn or Ronnier Quintero to develop quickly in order to balance the line-up. But the recent health crisis may have put both behind in their development. Scouts remain concerned that Amaya’s power is all muscle. That will affect Amaya’s slash line production unless he further refines his approach. While Amaya is praised for his receiving skills and arm, some are still concerned about his pop-times. 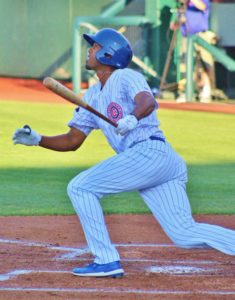 By now the word is out about the exciting potential of Brennen Davis. Working in extended Spring Training last year, Davis rebuilt his swing. The extra work paid off, as the number the 20-year old put up in only a third of a season were enough to earn him the system’s player of the year. Davis has the ability to barrel the ball and put up big power numbers. The Cubs eased Davis in defensively, playing him exclusively in left. However, Davis has the range for center and the arm for right field.

The Cubs have struggled with their speed, athleticism, and contact hitting over the past few seasons. While he may be a reach at this point, the cure for that could be Yohendrick Pinango. The 18-year old Pinango showed incredible plate awareness as a first time pro last year. In 274 plate appearances, Pinango walked 27 times while striking out only 20. Currently, there is no information on the Venezuelan’s defense. At 5’11”, 170-pounds, Pinango has good size for his age, with room to grow.

Christopher Morel is a highly athletic young player just beginning to realize his full potential. After struggling at the plate for the past two seasons, the wiry Dominican seemed to make better contact with South Bend. Settling on a position may have helped the focus at the plate for the 21-year old. Although the Cubs feel his defense at third base could be a plus, Morel may need to move to the outfield to accommodate their plethora of infield prospects.

At this time, Cole Roederer shows great range and instincts but lacks top arm strength defensively. That may effect Roederer’s chances as a starter, but he can become a key reserve. On the other hand, the left-handed hitting Roederer has power, but can be overly aggressive at the plate.

Despite some rather ordinary numbers both offensively and defensively in 2019, Andy Weber showed improvement in both toward the end of the season. With continued development, Weber has the skills to be one of the best all-around infielders in the system.

Originally an infielder, PJ Higgins has adapted well in his move to catcher. The 27-year old is a more athletic version of present back-up Victor Caratini. A better defender, Higgins may not be as natural to hitting as Caratini.

Known as "Tom U" across the internet, Tom also has a close working relationship with the front offices of all four of the Cubs' full season minor league teams. A frequent guest of the South Bend Cubs on WSBT radio, Tom has also written monthly articles for the South Bend Cubs' stadium program.