In late 2015, I set up my first full-fledged dynasty league — a 16-man league with more than 680 rostered major and minor leaguers. I quickly realized that the prospect portion was incredibly rewarding and thus began my obsession with prospects. Whether it’s July or December, I’m always going to be digging for the next big thing and as the St.Louis Cardinals rep, I vouch to uncover players in the system who aren’t widely publicized but can help you reap major rewards.

While I’m a Marlins fan first, I’m also a fan of any fun, young team whether it’s the Astros or the Rome Braves. I can appreciate talent and dream on tools.

I’ve been involved with sports production for most of my professional career. I was a sports producer for CBS in Miami, freelanced for the SEC in Gainesville, FL and currently am a Video Production Coordinator for athletics at USF in Tampa.

Along with baseball I’m obsessed with PS4 and have been a lifelong gamer. My Twitter following is embarrassing. Please consider donating a ‘Follow’ to the less fortunate at @EddyAlmaguer where I tweet 99% baseball facts. 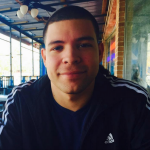