The Milwaukee Brewers have a minor league system on the rise, and some prospects had some excellent seasons. For a few of these prospects, they didn’t quite get going until later in the regular season, yet their improvement cannot go unnoticed.

Some of these improvements came a little too late to have impacted their placement on our Midseason Brewers Top 50 list. The improvements will be reflected in next January’s list, but that’s still a long way away. If you’re looking at the Brewers midseason Top 50 and want to know who from that group continued to rise over the second half of the season, here are the four biggest risers from the Brewers system at the end of the 2021 season.

Ashby was the 6th ranked prospect in the Brewers system in the midseason update. There’s not too much upward mobility from there, but Ashby has turned himself into a key contributor at the big league level, mostly out of the bullpen this year.

At the time of the midseason rankings, Ashby only had one big league appearance, and it didn’t go very well. Since then, he’s been back with the big league club and has dominated. Excluding his ugly debut outing, Ashby has a 1.78 ERA in 30.1 IP with just six earned runs allowed, six walks, and 38 strikeouts.

The Brewers still view Ashby as a starting pitcher and with the impending free agent departure of Brett Anderson from the Crew’s rotation, Ashby can slot right in in 2022. With his dominance at the big league level out of the bullpen this year, it leads to even more confidence at how well he can do going forward as he follows a path similar to that of fellow Brewers rotation stalwarts Corbin Burnes, Brandon Woodruff, and Freddy Peralta.

Few prospects across baseball have risen as much as Joey Wiemer has over the final two months of the season. A 4th round pick in the 2020 Draft, Wiemer had a massive leg kick and timing issues that plagued his college production. The tools were there, but the swing needed to be reworked. The Brewers removed the leg kick and replaced it with a toe tap for the timing mechanism. A simple fix, and it appears to have worked.

At the end of July, Wiemer was hitting .246/.370/.408 on the season with nine homers. That’s not bad at all, especially for someone working with major swing changes this season.

He was one of the few players with 25 homers and 25 steals in the minor leagues this season, and was three homers shy of the 30-30 club. If he were to be ranked now, he’d be in the Top 10 of the Brewers system, not 31st.

One the best hitting second basemen in the minors this year, Felix Valerio enjoyed a nice little breakout in 2021. He hit .314/.430/.469 in Low-A Carolina with more walks than strikeouts (54 to 49) and some decent extra base pop with 24 doubles, three triples, and six homers.

He earned a promotion to High-A Wisconsin and struggled a little bit as a 20-year-old in High-A over his last 29 games, hitting just .229 but he did still hit 13 doubles and slug five more homers in those games.

Valerio was 33rd on the midseason update. Even with his dip in batting average after the promotion, he still showed his plate discipline tools, some improved power, and has proven he’s a legitimate prospect. He could possibly be in the Top 20 discussion in this organization’s system.

Slotted 36th on the midseason update, Hendry Mendez has been rising quickly, and not just on prospects lists. Despite just being signed this January out of Venezuela as a 17-year-old, Mendez dominated in the DSL and was quickly promoted stateside to the Arizona Complex League.

Promoting Mendez that quickly without a production dropoff shows the Brewers strongly believe in this kid. It’s quite rare to see a 17-year-old promoted out of the DSL after just 21 games and then to perform so well stateside.

After seeing this type of progress, Mendez is at least a Top 15 prospect in this Brewers system right now. 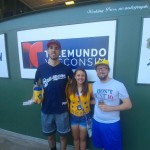