On July 25th the Fresno Grizzlies hosted their very first Pride Night. Pride Nights at baseball parks are not new, and during the 2019 season, nearly 70 MiLB teams will be participating in some type of Pride celebration. Fresno’s goal with this night was to let the LGBTQ+ community know that their ballpark is a place where they’re welcome, and as a pillar for the entire community, they believe it’s important to embrace everyone.

So why are the Grizzlies having their Pride Night in July, and not June, which is Pride Month and when most people and organizations celebrate Pride? Well, they consulted with Fresno Rainbow Pride who suggested that July would be a better month because most people leave the area in June and travel to Pride festivals in other cities like Los Angeles and San Francisco. 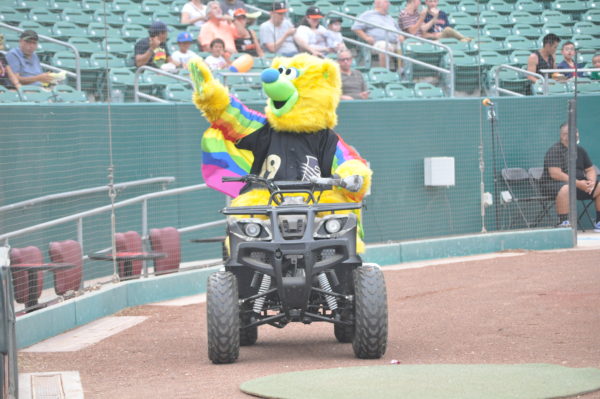 “We believe it’s important to promote inclusion and take a proactive stance to identifying where we may be able to build bridges into the community and embrace those who may not always feel welcome in our ballpark,” says Jamie Dierking, the Director of Marketing and Communications for the Fresno Grizzlies.

Proceeds from the special Pride ticket packages purchased online benefited Fresno Rainbow Pride, who have been serving the community since 1990. Special Pride themed jerseys were auctioned off to benefit Common Space, who work in the local LGBTQ+ community as well. 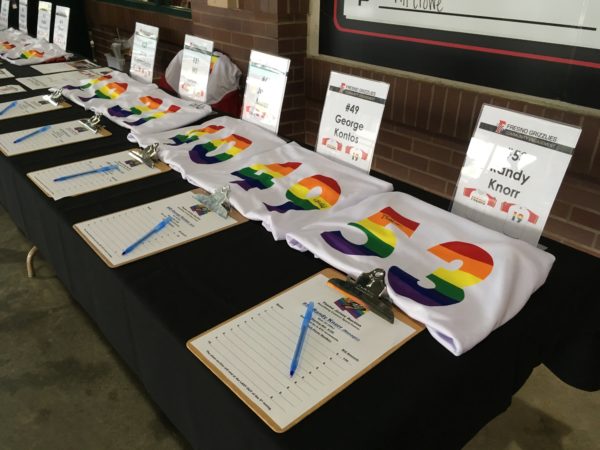 Pregame and in-game entertainment spotlighted members of the community who are on the forefront of diversity and inclusion in the Central Valley, including the singing of the National Anthem by Ray Quenga and first pitches by Bryan Cauwels and Ralph Esparza who are members of the LGBTQ+ community in Fresno, on the Board of Fresno Rainbow Pride, and Fresno Grizzlies’ season ticket holders. Additionally, more than 22 non-profit organizations serving the LGBTQ+ community in Fresno joined the Grizzlies with booths at the event.

The event probably wouldn’t be what it was without the help of Bryan and Ralph. They were instrumental in the planning and execution of the event. Together with the Fresno Grizzlies, they helped plan the in-game programming, secure the community vendor participants, and select the Pride merchandise and giveaways for the field.

The event was big success; 250 of the special Pride ticket packages were sold and the Grizzlies reported the highest food and beverage sales all year for a non-weekend night. Upon exiting the park, a tour of the Team Store showed little to no Pride merchandise left for sale.

The team even responded late in the game to send the fans home with a win. The River Cats went up 1-0 in the sixth on a Cristhian Adames RBI single. But in the seventh inning, Grizzlies Jose Marmolejos and Brandon Snyder both went deep with solo shots off Sacramento reliever Dillon McNamara to put the Grizzlies up 2-1. They then added an insurance run in the eighth to win the game 3-1.

Overall, a good time was had by all and the Grizzlies are already looking at ways to make next year’s event even better!