Why did I pick a random game in August to see the Reading Fightin Phils play the Portland Sea Dogs? To see Mick Abel‘s debut in AA since his promotion from High-A, of course! He didn’t disappoint, pitching extremely well in his debut, as noted below. Reading jumped out to a 4-0 lead in the 2nd inning on back-to-back home runs from Vito Friscia (3-run shot) and Madison Stokes. Portland chipped away scoring in the 3rd on a home run by Izzy Wilson then again in the 6th on Ceddanne Rafaela‘s home run. Rafaela also doubled in a run in the 8th but the Fightins held on to win 4-3. But those are things you can see in a box score. Let’s see what it was really like to attend a game in what they call “Baseballtown”.

FirstEnergy Stadium has been home to the Reading Fightin Phils since 1967, which is tied with the Detroit/Lakeland pairing for the longest affiliation in Minor League Baseball. The ballpark is a 90-minute drive from Philadelphia. Prior to the Phillies, Reading was a farm system for the Boston Red Sox in 1933 and 1934 then with the Cleveland Indians from 1952 until 1961. The team celebrates its history, filling the hallways with photos, pictures, newspaper clippings, and facts about every year’s team. The stadium also pays homage to baseball Hall of Famers who appeared in the park at one time during their playing days. There are large baseball cards of the players along with their team and the year they played in the park. Park Usher, Tommy D, has been working there since the early 90s and said he loves seeing the smiles on everyone’s faces when they walk into the park. He was extremely friendly and helped me find my seats quickly.

Reading was home to many great players over the years, some who found success with the Phillies and others who developed into All-Stars and award winners elsewhere. Some of those players are: 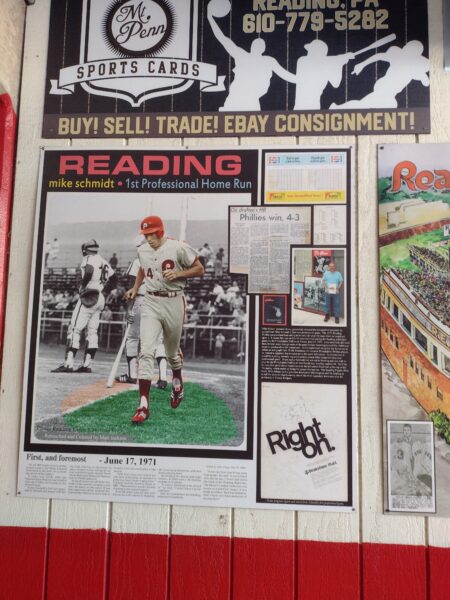 The ballpark has a variety of foods for everyone. The Churger is a combination hamburger and chicken sandwich whereas the Cheeseburger Dog is a cheeseburger shaped like a hot dog. Another popular option is Manny’s Fries which serves some tasty French Fries. Funnel cakes and ice cream are two options for those looking for sweets. Of course, the ice cream is served in a mini-helmet. The team also offers a great deal – for $19 added cost, you can partake in their buffet which is available behind right field. Hot dogs, bbq chicken, hamburgers, fries, macaroni and cheese, potato salad, pasta salad, cookies, Pepsi beverages, and more are all available for unlimited servings. Everyone at the concession stands served with a smile on their face and was so polite and happy. I felt like I was at Disney World.

The team has five mascots – Screwball, Blooper the Hound Dog, Bucky the Beaver, Change-Up the Turtle, and Quack the Duck. The furry friends don’t just entertain with their antics but also with their musical ability. You read that right – all five of them play in a band prior to every Saturday night game on the Tompkins Plaza. The plaza opens two hours prior to start time and offers a boardwalk-style atmosphere of food, games, and a fun zone. On other nights, there is also live music but, alas, not performed by the mascots. Tonight, however, was a special concert by the Mascot Band who went on after the fireworks show post game.

There is also the Crazy Hot Dog Vendor who shoots hot dogs into the stands while riding an ostrich. The Racing Vegetables partake in a race at the end of the 4th inning and attempt to avoid the villain – Evil Candy. Behind the 3rd base seats is the picnic area. Behind left field, there is a party deck and in right field, a pool area. All in all, Reading does a great job of keeping their guests entertained. Tonight was also Harley Davidson night – the 21st annual celebration of the motorcycle. Prior to the game, about 100 motorcycles circled the field. The players wore custom Harley Davidson jerseys which were available for auction and the team gave out Harley-themed hats to the first 2,500 adults in attendance. 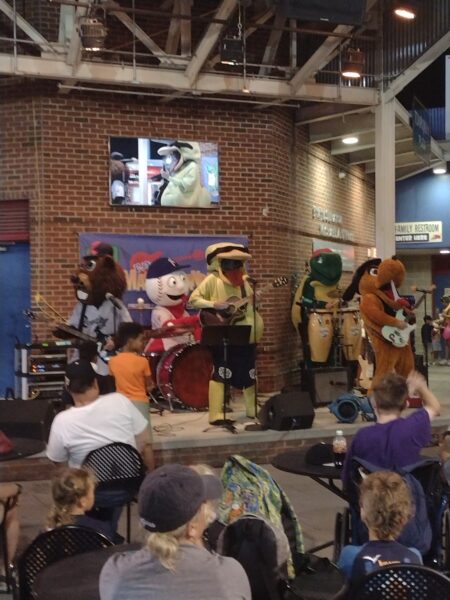 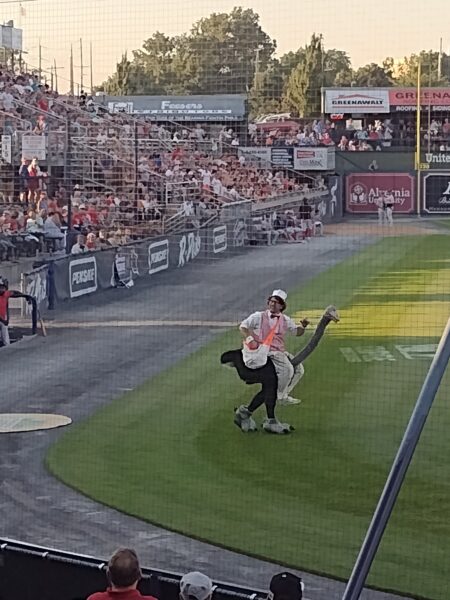 Reading is home to many of the organization’s top prospects. In fact, on our new rankings released last month, 4 of the top 6 are on the roster. Here are my observations on some of the players based on what I saw during the game:

Mick Abel, RHP (3 on our Philadelphia Top 50): He looked sharp in his AA debut going 6 innings and striking out 8. He threw 89 pitches, 62 for strikes showing good command. On the mound, Abel showed a lot of poise and confidence, also. For a 21-year-old making his first start at a new level, he didn’t look the least bit nervous at all.
Johan Rojas, OF (2): Rojas struggled this evening but he did work a long at-bat before striking out. His speed was on display as he was narrowly called out at first on a ground ball to third base.
Jhailyn Ortiz, OF (14): The man has immense power. He finished the night 1-4 but hit two long foul home runs, one going out of the park.
Carlos De La Cruz, OF (41): A very enthusiastic player who was having fun the entire evening. When he moved to third base on a single by Herbert Iser, he was clapping his hands. Before and after the game, he was seen talking to fans and stadium staff smiling the entire time. He’s a tall player with a long swing but moves gracefully in the outfield.
Ceddanne Rafaela, OF (5 on Boston Top 50): He looked very impressive tonight going 2-4 with a long home run in the 6th inning off Abel. He did a little celebration during his home run trot which didn’t endear him to the Reading faithful.

A genuinely great experience from when I walked into the stadium until I left after the game. The entire staff was friendly and accommodating and the food and entertainment were exceptional. The view of the Berks County mountains in the outfield was something different for me, as I’m used to the view of Center City Philadelphia at Citizens Bank Park. The team goes out of its way to ensure everyone is entertained throughout the time spent there. If I lived closer to Reading, I would have purchased season tickets that night. That’s how much fun it was. 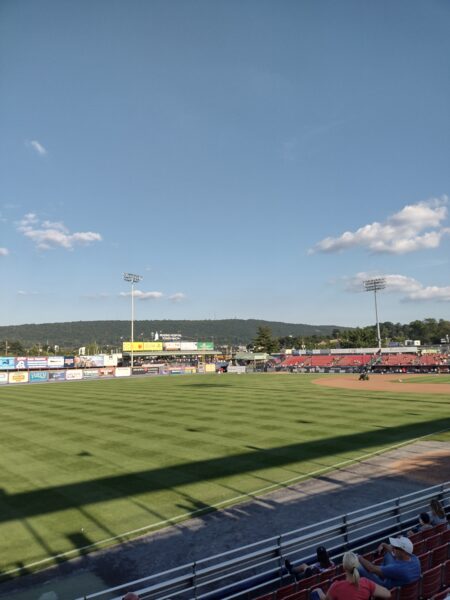