The 2018 SiriusXM All-Star Futures Game heads to Nationals Park this coming Sunday, July 14th and Prospects1500 will be there covering what many consider the highlight of the All Star break. Rosters for Team USA and Team World were announced this past Friday and while top prospects such as Vladimir Guerrero Jr, Eloy Jimenez, Nick Senzel and Victor Robles will not be playing due to injuries the rosters are full of exciting future stars.

Here are the U.S. and World rosters: 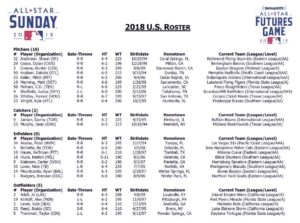 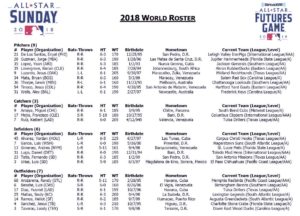 Heading into the game it seems that Team USA possesses a distinct pitching advantage featuring top pitching prospects Mitch Keller, Hunter Greene, Dylan Cease, Justus Sheffield and Matt Manning. The overall number one pitching prospect Forrest Whitley was also named to the team, though his status for the game is up in the air after leaving Friday night’s start in the first inning with left oblique discomfort. Out of this group, Sheffield and Keller are the most likely candidates to see major league action the soonest. Keller, the Pirates top prospect, was recently promoted to Triple-A Indianapolis and Sheffield has been tremendous pitching with the Yankees AA and AAA clubs in (Easton and Scranton/Wilkes Barre) in 2018. The Bombers top prospect could factor into the pennant race in the fall.

Team World arguably has only one pitcher in the top 100 of MLB prospects, that being left-hander Jesus Luzardo from the Oakland A’s system.  The 20-year-old has been impressive with the system’s Single-A (Stockton) and Double-A (Midland) clubs this season and has the potential to make it up to the big leagues next year. Another pitcher to keep an eye on is Philadelphia’s Enyel De Los Santos, who is on the Team World roster and will also pitch in the Triple-A All Star Game on July 11th. The right hander has gone 9-3 with an International League best 1.89 ERA in 16 starts with the Lehigh Valley Iron Pigs.

The top hitting prospect playing will be San Diego shortstop Fernando Tatis Jr. who has been tearing it up with AA San Antonio with a .291/.363/.518 slash line and 15 HR in 82 games.  Among the other highly rated prospects joining him on Team World are top catching prospect Francisco Mejia, outfielder Leody Taveras, infielder Luis Urias, outfielder Jesus Sanchez and infielder Andres Gimenez. The World team tandem of Tatis Jr. and Urias could very well be a preview of the Padres middle infield next year and for years to come. In addition to the duo, the other most likely soon to be major league player figures to be Mejia.

Infielders Brendan Rodgers and Bo Bichette out of the Colorado and Toronto systems headline the offense for Team USA. Rodgers has produced at each level in the Rockies system and has hit 17 home runs to go along with a .273/.336/.518 slash line with the AA Hartford Yard Goats. Bichette will be playing in his second Futures Game after going 0-2 in last year’s contest. Both players have future MLB All Star potential and will likely be on big league rosters in 2019 if not sooner.  Other position players to keep an eye on for Team USA include the Brewers top prospect infielder Keston Hiura, Reds outfield prospect Taylor Trammell, Angels OF Jo Adell and Seattle’s Kyle Lewis. The top prospect in the Mariners system, Lewis is playing regularly after suffering a major knee injury in 2016 and was banged up again in 2017.

Team USA holds a 12-7 overall advantage in the game which has taken place every year since 1999 and have won 7 of the last 8 games with the only recent defeat coming in 2016. They appear to have the advantage in this year’s contest as well, but the game isn’t won on paper. No matter which team is victorious, it will be fun afternoon watching the stars of the future.