Prospect collectors rejoice! Another new product, chock full of prospects, is here! 2021 Bowman Chrome, the brand’s second installment of three on the year (with Bowman Draft scheduled for release in December) arrived September 22 as a hobby exclusive product, for now. That means you can find it in hobby stores or online, but not in retail locations such as Target or Walmart, at least for now. In 2021 we did see Bowman Chrome mega boxes ($35) in Walmart so those could be coming. Right now there are 3 different types of boxes available:
Bowman Chrome Lite box – no guaranteed autos, but exclusive mini diamond parallels (could have an auto)
Bowman Chrome Hobby box – 2 guaranteed chrome autos per master box, one per mini box. 2 mini boxes make up one master hobby box. 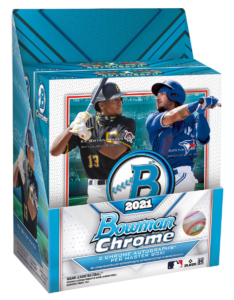 Bowman Chrome HTA box – One box of only 3 cards, all of which are chrome prospect autos

Rather than running through the entire checklist and giving you a generic preview, which you can find on several sites including Topps, Beckett and Cardboard Connection, I thought it would be fun to pivot and do something a little different. Let’s go through the alphabet, A to Z, and find out something about 2021 Bowman Chrome according to the letter! Don’t be surprised if I need to stretch a little on some of these. Also, when I use “BC” below, that’s shorthand for this product’s name, Bowman Chrome.

A – Astros. Don’t sleep on Houston in this product. They could be one of the lower-to-mid priced teams in breaks, but Pedro Leon is in the Top 5 of my favorite prospects from this new product, and many are overlooking what I perceive to be great value. Leon has already played in a Futures Game, and I predict his 1st Bowman autos will be some of the most sought after within the next year or two.

B – Bowman. This is Topps’ brand for prospect cards. It has been for a couple of decades. How much longer will we get Bowman cards? With the news that MLB has given Fanatics the exclusive licensing for baseball cards in the near future, does Topps/Bowman continue producing unlicensed stuff, and if they do, will they demand any interest in the hobby? We’re going to have to wait and see.

C – Cristian Hernandez AND Carlos Colmenarez! Two of the top prospects in the product, both of whom have 1st Bowman autos. The Cubs and Rays international signees are both 17-years-old and debuted in the Dominican Summer League. If you’re looking for two names to chase in Bowman Chrome, these are two good ones to begin with.

D – Dodgers. Los Doyers will be one of the highest-priced teams if you’re looking to scoop them up in a card break. The reason being, two of their three available autograph cards are Wilman Diaz and Luis Rodriguez. These are two of the biggest names you’ll find in this product, also international signees and their first Bowman cards.

E – Eduarqui and Emmanuel. Two very solid 1st Bowman autos you could land are Brewers OF prospect Eduarqui Fernandez, who’s spent this season at Milwaukee’s Rookie ball team in the Arizona Complex League, and Minnesota’s Emmanuel Rodriguez, an OF prospect on the Twins’ Florida Complex League rookie team. Both hit in the low .200s this year but are so young and have plenty of time to work on their game. The big question for these two in the hobby – hold or sell?

F – Futures Game MVP. That would be Brennen Davis, who slammed two homers in this past July’s Minor League Baseball All-Star showcase. Davis has two cards in BC – one of the set’s base prospect cards, and a 2020 Summer Camp insert. Brennen’s 1st Bowman cards were back in 2018 Bowman Draft.

G – George Feliz. Really, George Feliz? Yes, indeed. I like Feliz as a prospect and feel he’s deserving of a mention in this column. Amazingly, he is one of SEVEN Mariners in Bowman Chrome with 1st autos. Feliz ranks in my top 10 for this product, while other Seattle prospects with autographs include Milkar Perez, Starlin Aguilar, and sleeper pitcher Taylor Dollard.

H – Hedbert! Brewers stud OF prospect Hedbert Perez has his first base card in BC. But some collectors will be frustrated that it does not include the 1st Bowman logo. That designation was reserved for his first card back in 2021 Bowman, but that was an autograph-only card. He didn’t have a base card in that product and many were hoping this release would have the logo on his base card. No such luck.

I – Inserts. This year’s Bowman Chrome has several different insert sets. These insert cards are mixed into packs with the cards from the base set. Look for Summer Camp, 40-Man Futures, Dawn Of Glory, and Bowman Ascensions (case hits from what I’ve seen in breaks so far).

J – Jarren and Jeter. Red Sox prospects Jarren Duran and Jeter Downs do both have chrome cards in BC. They’re not highly desirable cards unless you’re looking for colored or numbered parallels for your personal Red Sox collection. Neither of these is their 1st Bowman card, and it looks like Duran may have his first official Topps rookie card in 2022.

K – Ke’Bryan Hayes. Not a prospect anymore, the Pirates’ star 3B is coming off a year in which he had valuable rookie cards in 2021 Topps and Bowman products. In this new BC, Hayes does have a card in the base set, short-printed image variation rookie cards and autos, and a case hit Bowman Ascensions insert and autograph.

L – Liover Peguero. This Pirates prospect had his first Bowman card in the initial 2021 release, but it did not have that 1st Bowman designation. Now if you’re lucky enough to get one of his Bowman Chrome autos here, it’s actually his second Bowman issued card but, surprise surprise, it now has that 1st Bowman logo. Go figure.

M – Made. One of the SEVEN Cubs chrome prospect autos, Kevin Made is an exciting 2019 international signing making his Bowman debut. If you have never gone for the Cubs in any card product, this might be the year to chase some Cubbies ink and hold.

N – New York. Do the Mets or Yankeees have any sought-after 1st Bowmans? I’ll let the reader make that decision. The Metropolitans have 1st Bowman autos for 2020 3rd round pick Anthony Walters (who was actually released by the St. Lucie Mets on August 2nd) and 2017 signee Jose Butto, 14th ranked on the latest Mets Top 50 prospects column. The Yankees counter with 1sts for Alexander Vizcaino (now a Cub) and Elijah Dunham. I’d rank Vizcaino’s cards more desirable than Dunham’s right now, even though collectors usually prefer hitters over pitchers for future value.

O – Osleivis and Olivarez. Osleivis Basabe is one of the Rangers 1st Bowman autos, even though he’s now a Tampa Bay Ray via the Nate Lowe trade. Helcris Olivarez is one of the few Rockies 1st autos you can find, in addition to another one of my favorite Rox prospects you’ll read about a little later in the alphabet.

P – Preciado. That’s Reginald Preciado folks. Big time Cubs prospect who came over in the Yu Darvish trade last winter. Reggie is actually still in a Padres uniform here, but will be one of the top BC names to chase.

Q – Quero! Another exciting name and prospect to follow is Milwaukee’s Jeferson Quero. Get his 1st Bowman card in BC and don’t worry about the news that he separated his non-throwing shoulder back in August and had surgery. He’s still a good one to get in #thehobby and should be ready for Spring Training 2022 according to MLB.com’s Brewers beat writer Adam McCalvy.

R – R is for Ramirez. Look for the 1st Bowman card of New York Met prospect Alex Ramirez, not Angels Alexander Ramirez who debuted in 2021 Bowman. Alex came in at #7 on our midseason Mets Top 50.

S – #ScottyBallgameBreaks. Why not throw in some shameless self-promotion? I’m going to be opening a full case of Bowman Chrome hobby boxes as I share my product with other friends and collectors in the hobby. The first break is already filled but I will probably have a second case and potentially more. Follow me on Twitter at @Scotty_Ballgame for info and details, and check out my ScottyBallgameBreaks website.

T – Tigers? Sure, why not? This is an organization coming on strongly in the hobby. 2019 Draft gave us some Greene, and 2020 Draft served up some Tork. Now in 2021 BC we don’t get a lot of 1sts, but we do get a very solid one in Cristian Santana. He was Detroit’s top get in this past January’s J2 signing period.

U – Urbina, as in Twins OF prospect Misael Urbina, looks to be one of the only redemption autos in BC. What does that mean? You receive a card with a scratch-off code that you submit on the Topps website. Then when they have Urbina’s autographed cards in hand, they mail your auto card to you. It’s not immediate gratification as pulling on-card autos out of the packs. Jarred Kelenic is another player with redepmtion autos, from what I’ve seen via photos on Twitter.

V – Victor Acosta. Padres correspondent Alex Sanchez (@Alex_W_Sanchez) ranked Acosta 10th on his midseason Padres Top 50 update. Double-A Central correspondent Byron Cox (@byrontx) enjoys buying into BC breaks and tells Prospects1500 that he’s seen so many Padres hits pulled already. With Acosta, Preciado and several others, San Diego is one of the most desirable “Pick Your Team” clubs to acquire.

W – Winckowski. Last name Winckowski, first name Josh. The former Met, former Blue Jay, and now current Red Sox prospect Josh Winckowski has his 1st Bowman autographs in BC. Collector beware though. It looks like he ran out of ink with the Topps-provided markers and some of his autographs are showing up with thicker sharpie signatures on them. They don’t look as good.

X – Xzavion Curry. No, unfortunately, Curry is not included in 2021 Bowman Chrome, but he should be! Let’s hope the Indians/Guardians stud pitching prospect makes his first appearance either in 2021 Draft or 2022 Bowman.

Y – Yiddi Cappe. I love this name. I think I pulled a low serial numbered 2020 Panini Elite Extra Edition Cappe card, but now he has 1st Bowman cards. If you’re lucky enough to snag some sweet Yiddi hits, make sure to hit up our Marlins correspondent and Fish collector Stoffer Cochran (@stoffer81)!

Z – Zeke Tovar. That’s his nickname, right? The Rockies SS phenom, Ezequiel Tovar, tore up Low-A earlier this season with Fresno and got the promotion to High-A Spokane. He’s 20 and is one of the best names to hit for Colorado, with his 1st Bowman cards, including autographs! @TheNeedle12 Nate Handy says I saved the best Bowman 1st card for last.

How’d I do? Feel free to leave comments below or hit me up on Twitter. I’d love to get feedback and hear what you think about the hobby, this new product, and what hits you pull or land in breaks. Happy prospecting and collecting!