We are a little less than a month into the Major League baseball season and so far three of my top 50 Mariners prospects have seen big league action including two that made the roster out of Spring Training. Dan Vogelbach, a top ten prospect in January, forced his way onto the roster with an impressive spring. He beat out Mike Ford (#16 in January), a Rule 5 draft pick for the backup job and was consequently sent back to the Yankees. He has since struggled with consistency in April, due in part to his platoon 1B status. It’s going to be difficult to expect progress without playing every day. With the return of Ryon Healy from the disabled list, Vogelbach was just sent back to Triple-A.

The other prospect to make the roster out of Peoria was #37 overall prospect, catcher Mike Marjama. Marjama was part of the opening day battery opposite Felix Hernandez due to Mike Zunino being a late injury scratch. The injury opened up another spot on the roster which went to #34 prospect, catcher David Freitas. Freitas has had a little more success than Marjama at the plate and remained on the roster when Zunino returned last week, shuffling Marjama back down to AAA.

In other prospect news, #1 overall organizational prospect Kyle Lewis has been cleared to play and will do so at extended spring training. With that news putting a smile on Mariners fan faces comes news that top overall pitching prospect Sam Carlson is still dealing with elbow issues and the fear that Tommy John surgery may be in his future. 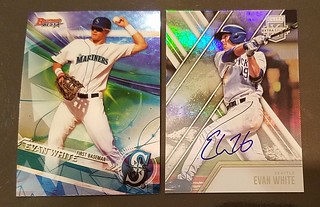 Sam Delaplane – The reliever had gotten off to a great start in Clinton getting 2 saves in 4 games with a 1.59 ERA and 0.882 WHIP until he ran into the Wisconsin Timber Rattlers on 4/26 and gave up 5 hits and 3 ER in one inning.