I turned 34 a few weeks ago and was at the playground with my son and was thinking about what my next Yankees article could be. A friend suggested why not write an article related to my age? Alrighty then, let’s do it! Here’s a numerical column of interesting things related to the 2019 Yankees and the New York’s farm system from number 1 through 34.

1. 1st place, where the Scranton/Wilkes-Barre RailRiders finished in the International League North Standings with a record of 76-65. They were then swept in 3 games by Durham in the Semifinals of the playoffs. Also 1 Steinbrenner Drive in Tampa, Florida, the address of George M. Steinbrenner Field where the Tampa Tarpons play and the site of Yankees Spring Training.

4. Complete games Michael King has in his MiLB career, two of which were complete game shut outs.

Mike King is ready to make his mark in 2020 for the New York Yankees. pic.twitter.com/MrmiktEvVB

8. Number of wins Miguel Yajure had with the Tampa Tarpons before earning a promotion to Double-A Trenton on August 25. He would go on to finish 9-6 with a 2.14 ERA and 133 strikeouts over 138.2 innings between both teams.

10. Number of doubles Estevan Florial had in only 74 games for the Tampa Tarpons.

Teammates and coaches have a lot to say about OF Estevan Florial: pic.twitter.com/61IAOBSNIz

13. Number of homers by catcher Josh Breaux in only 51 games for the Charleston RiverDogs. He missed almost 3 months of the season with an elbow injury. 13 is also the number of homers for Ezequiel Duran, who led Staten Island.

15. Aaron McGarity had 15 strikeouts in 11.1 innings of relief for the Surprise Saguaros in the Arizona Fall League. It’s also the number of doubles Ryder Green had, leading the Pulaski Yankees.

16. Age of the top international prospect Jasson Dominguez, whom the Yankees signed in 2019.

17. Number of homers Dermis Garcia hit for the Tampa Tarpons in only 75 games, leading the team.

18. Number of doubles hit by Diego Castillo for the Tampa Tarpons, finishing 2nd on the team to Oswaldo Cabrera‘s 29 doubles.

21. Number of saves Daniel Alvarez had to lead the Trenton Thunder in 2019.

22. Number of home runs Trey Amburgey hit for the Scranton/Wilkes-Barre RailRiders, finishing third on the team. Amburgey hit .274 with those 22 homers and 31 doubles in 2019.

In addition to a solid power profile, OF Trey Amburgey possesses good speed on the basepaths. He stole 12 bases to go with his 16 homers with @TrentonThunder in 2018. Amburgey hit an RBI-triple in today’s Yankees Split Squad game. pic.twitter.com/0OuyBrGWqa

24. Number of earned runs Deivi Garcia gave up in 40 innings with Scranton/Wilkes-Barre, leading to a 5.40 ERA.

25. Number of doubles Kyle Holder had for the Trenton Thunder, second on the team in 2019 behind…

26. Ben Ruta had 26 doubles to lead the Trenton Thunder. 26 is also the number of home runs Ryan McBroom had with Scranton/Wilkes-Barre, leading the team. The RailRiders had four players eclipse 20 homers in a season for the first time in franchise history – Ryan McBroom (26), Mike Ford (23), Trey Amburgey (22) and Kyle Higashioka (20).

27. Yankees first basemen Mike Ford’s age, who debuted in the majors in 2019. 27 is also the number of World Series Championships the Yankees have!

28. Number of World Series Championships the Yankees will have at the end of 2020! I can hope right?

29. Number of doubles Ryan McBroom had for Scranton/Wilkes-Barre before being traded to the Kansas City Royals August 31. He hit .315 and had 26 homers as well. The 29 doubles were second on the team to Trey Amburgey’s 31.

30. With the 30th pick in the 1st round of the 2019 Draft the Yankees selected Anthony Volpe, shortstop from Delbarton High School in Morristown, NJ. New York signed him away from a commitment to play for Vanderbilt.

32. Number of doubles Canaan Smith had with the Charleston RiverDogs finishing 2nd on the team to…

If you’re a prospector of baseball cards, whether you’re a fan of the #Yankees or not, trying to figure out who the next Yankees’ stud prospect will be is always one of the top priorities in the hobby. The player I’ve had my eye on is Canaan Smith. He’s one of my #Watchmen. pic.twitter.com/DJbaND6q2J

33. Brandon Lockridge‘s 33 doubles for Charleston AND the number of players used by both teams in the DSL Yankees 38-2 win over the DSL Twins on July 3rd.

BONUS NUMBER 35, my age next year!
35. Number of steals Josh Stowers had to lead the Charleston RiverDogs, good for 2nd in the South Atlantic League behind Rome’s Justin Dean. 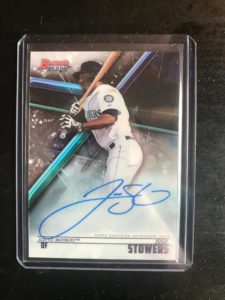 Paul Woodin is a huge sports fan who leads the New York Yankees minor league farm system coverage for the Prospects1500 team. Growing up playing and watching baseball while collecting baseball cards, Paul developed a love for the game. Born and raised in Connecticut between Yankees and Red Sox territory, Paul become a Yankees fan because of Don Mattingly and Derek Jeter. An avid sports card, memorabilia and autograph collector, he participates in redraft, dynasty and prospect-only fantasy baseball formats during each season. Feel free to reach out on Twitter
@PaulWoodin1.