As a diehard Red Sox fan and person who runs a prospects website, I always like to look back on what I think are the best performances month to month in the organization. From Low-A Greenville up to Triple-A Pawtucket, these are the players who stood out to me and deserve to be spotlighted.

HITTERS:
Jantzen Witte, 3B (Portland, Pawtucket), @Jantzenwitte
AAA Pawtucket activated from the DL on May 1 but he was assigned to AA Portland on May 12. He’s been tearing it up since. He led all of Boston’s minor leagues with a 1.202 OPS in May, slashing .337/.427/.587 with 4 HR and 24 RBI (also most in the organization for the month). He was also a doubles machine with 9 in May. It could just be an amazing month for the 28-year-old, 23rd round pick from 2013 who’s been outside my Red Sox Top 50, but he’s certainly worth watching to see if he can keep it going in June.

Cole Sturgeon, OF (Portland, Pawtucket)
Sturgeon continued his solid 2018 play and was tied for most hits in the organization in May (34, with Jeremy Rivera and Chad De La Guerra). Halfway through the month he was promoted to Triple-A, where he previously saw only 2 games back in 2016. We’ll see if his .298/.350/.465 slashline carries over into this month.

On @SoxProspects News: May Players of the Month: Santiago Espinal and Denyi Reyes https://t.co/hR2byw3jWe

Marino Campana blasted a pair of monster homers for the #Drive on Wednesday, and his second of the day gave the Drive a 5-4, walkoff win over the Augusta GreenJackets to secure a doubleheader split.

Josh Ockimey, 1B (Portland), @josh_ock
If you’ve read my Red Sox Top 50 and subsequent columns or follow me on Twitter (@Scotty_Ballgane) you’ll know Ockimey is one of my prospect crushes. I had him ranked 3rd in the system going into 2018, higher than most other Red Sox lists, but I believe in the bat and think it can play in the majors at some point. 8 doubles, 5 HR, 20 RBI and 23 walks highlighted Ockimey’s very good month. Does all that help you look past his 34.6% K%? He’s still only 22 and in his first full season in Double-A. 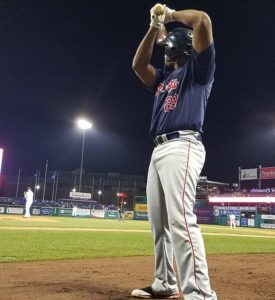 PITCHERS:
Denyi Reyes, RHP (Greenville), @denyikings
There are probably a lot of people who have not heard of Denyi Reyes. I am embarrassed that I did not know more about him and did not even include him in my preseason 2018 Red Sox Top 50 prospects. He may be making a case to be in my Top 20 or 25 midseason rankings. All he did in May was start 6 games (2-2 record), put up 37 Ks in 38 IP, walked only, and posted a 1.66 ERA and 0.79 WHIP. He finished out the month with a 9 inning, 3-hit shutout against the Columbus Clippers on 5/27, Greenville’s first nine-inning complete game in franchise history.

Denyi Reyes fired the #Drive‘s first nine-inning complete game in franchise history in a 3-0 shutout of the Columbia Fireflies on Sunday in Columbia. Reyes needed just 92 pitches to complete his gem, and he struck out eight.

Jalen Beeks, LHP (Pawtucket), @jalencbeeks
Beeks started 6 games for the PawSox in May, led the organization with 43 strikeouts, and posted a solid 3.19 ERA. I had originally left him off this list. Not sure why. Maybe I didn’t like the 7 HR he gave up during the month, or the fact that he allowed 4 ER in 6 IP on 5/26, but with his start on 5/31 (7 IP, 4 H, ER, 7 K) I had to add him back. He could be next in line for a shot at the Red Sox rotation when the need arises.

With every passing shitty start by Drew Pomeranz, I want Jalen Beeks up with the #RedSox more and more. Beeks allowed just 1 ER in 7 IP while striking out 7 tonight for Triple-A Pawtucket. Lowered his ERA to 2.56 and leads all of #MiLB with 85 K.

Matthew Gorst, RHP (Salem), @matthew_gorst44
I have Gorst on this list because he notched 5 saves in May and misses bats with more strikeouts than innings pitched. His month’s line was 10.2 IP, 12 K, 2.53 ERA to go along with a not-so-good 1.41 WHIP.