Let me start out by saying we’ll have an updated Red Sox Top 50 sometime around midseason.  Any Prospects1500 rankings listed in this piece are from Ryne Alber’s Red Sox Top 50 Prospects from back in January.  What you’ll find below is a peek at Boston’s AAA, AA and both High and Low A teams and some players (both hitters and pitchers) that have been standouts during the first month of the season.  In some cases I’ve had to spotlight some of the top Red Sox prospects who’ve also gotten off to slow starts.  I welcome any and all comments here on Prospects1500 and please follow us on Twitter at @Prospects1500 to keep up with all the great content our staff is generating.  OK Red Sox Nation and fellow dynasty leaguers, here we go!

Pawtucket Red Sox (AAA – International League)
To be honest I don’t see a lot to be excited about on this current PawSox club, but I will spotlight a few players.  With guys like Bryce Brentz, Matt Dominquez, Steve Selsky (saw some MLB time earlier this year), Noe Ramirez, and Allen Craig we’re basically looking at a AAAA team.  C/OF Blake Swihart is still on the DL.  Their top prospect at this level, 1B Sam Travis, has gotten off to a slow start after a very good spring.

Aneury Tavarez, OF (currently #18 on SoxProspects.com’s list of top Red Sox prospects)
Tavarez had been selected by the Orioles in this past December’s Rule 5 Draft but was returned to the Red Sox on April 2 and assigned to Portland (AA).  He was very good in 18 games for the Sea Dogs (.377 BA/.473 OBP/.475 SLG/.948 OPS, adding 6 SB) and just last week was promoted to Pawtucket and has continued right where he left off.  In his first 3 games he’s hitting .385 with 2 HRs.  Don’t get too excited #RedSoxNation because he’s at best a 4th/5th outfielder but if he keeps it up could see some MLB PT later this season.

Henry Owens, P
Owens isn’t prospect/rookie eligible anymore (85 IP in MLB) but he’s still only 24.  Seems like he’s been around and had his chances for several years now.  Oh wait, he has.  But check this out.  Has he turned a corner or are AAA hitters just that much more easy to put up good numbers against compared to the majors?  I’d lean toward the latter but his 2017 numbers are very good so far.  The Sox might give him another chance soon because Kyle Kendrick is NOT the answer.  Owens is 3-0 with a 1.35 ERA in 5 games started, although he’s still walking too many for my liking. (18 BB in 26.2 IP, 1.31 WHIP)

Two other pitchers who have fared well to monitor are Marcus Walden (2.01 ERA in 22.1 IP) and Brian Johnson. (2.28 ERA with 1 MLB spot start a couple weeks ago)

Portland Sea Dogs (AA – Eastern League)
This team is playing well and they’re 15-9, only 1.5 games behind Trenton in the Eastern League Eastern.  There is a good amount of talent here and I was fortunate enough to see them play 2 games in Hartford against the Yard Goats this past week – which was a 3-game sweep as part of a recent 6 game winning streak.  Of course the one big name that everyone’s talking about is… 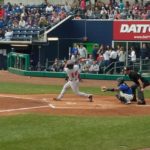 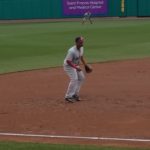 Jamie Callahan, RHP (SoxProspects #21)
Callahan’s been around for a little while now (2nd round pick in 2012) but is still only 22.  He’s right now enjoying his best season so far, but now he’s coming out of the bullpen.  The switch has definitely been good for him as he’s posted a 3-1 record with 2 saves and some awesome numbers – 1.64 ERA, 0.73 WHIP, and 17 K in 11 IP.  I may be pushing it some but totally would not be surprised to see a promotion to either AAA Pawtucket or possibly even Boston later in the year if the Sox need bullpen help with the still uncertain status of Tyler Thornburg and Carson Smith. 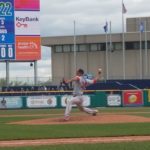 Salem Red Sox (High A – Carolina League)
Like their AA brothers, Salem has also started 2017 off with a great start.  Sitting at 19-10 above the Carolina League Northern division, the High A Red Sox squad is home to some of Boston’s top prospects.

Josh Ockimey, 1B (Prospects1500 #10, SoxProspects.com #8, MLB Red Sox #8)
As with Chavis, Ockimey is tearing it up so far in High A ball.  He and Chavis are 2nd/3rd in batting average overall in the league (and before his promotion to AA Josh Tobias was right behind them in 4th) and he’s tied for 6th with 31 base hits.  With a slash line of .356/.460/.586/1.046 all Red Sox prospect followers should continue to keep their eye on this 21-year-old.  Go grab a 2017 Bowman Ockimey autograph NOW before the value skyrockets.

Greenville Drive (Low A – South Atlantic League)
Boston’s Low A affiliate is also off to a great start, pacing the SALLY atop their Southern Division with a 19-9 record.  Look to this club for some additional top notch talent and more of the quality Red Sox prospects which still ranks Boston’s farm system as one of the best in baseball.

Photos of Devers and Callahan (although not great) are my own.  Taken 5.3.17 at Dunkin’ Donuts Park in Hartford, CT.