With the 2021 MLB season officially over now after the Atlanta Braves won the World Series, the MLB offseason begins anew as we look forward to next year. As such, teams everywhere are making moves in order to help prepare them for the future. The first step towards building a foundation of organizational depth is the Rule 5 Draft, which happens later this year in December. Without getting into the intricacies of the draft, the basic premise is to help avoid teams hoarding their talent and to protect those players who have been signed at an earlier age and who have been with the club for five years to either finally get that chance with their original club or a new one. In recent years, there have been some (eventually) notable players that have been selected by new teams and succeeded, such as Victor Reyes, Anthony Santander, Ryan Pressly and more. It’s definitely an upcoming event that should be taken seriously, because there are always opportunities to improve and this is one of them.

The situation that the Twins are in is quite perplexing. After a hugely successful 2019 season in which they took the league by storm and broke offensive records left and right, they have since taken two steps backward in their development and have seemingly gone into an unplanned rebuild mode. No longer were they competing for a top spot in their division, and now their focus has seemingly changed into seeing what their youth has to offer. Looking up and down their 40-man roster, they’ll have some decisions to make regarding who will stay and who will go. Another quibble here is that any player added to the 40-man roster can’t simply be removed right after this draft, which essentially means that whatever decisions are made need to be done with a long term goal in mind. Here are seven of the most notable prospects that are likely to be added to the 40-man roster in order to be protected:

Sidelined this year with a torn ACL, Lewis has been working hard at getting himself back onto the field. The Twins put him on a slow-burning rehabilitation program that forced him to stay off the field and not swing a bat for the majority of his time away. Instead, he adapted to a Tommy-John surgery program that advanced and strengthened his arm and upper body. It wasn’t until recently where he finally picked up a bat and was able to take some swings in a handful of instructional games. Still, as reported by Dan Hayes of The Athletic, he’s not close to being ready to fully run and doesn’t trust his knees yet with regard to being on the base paths. 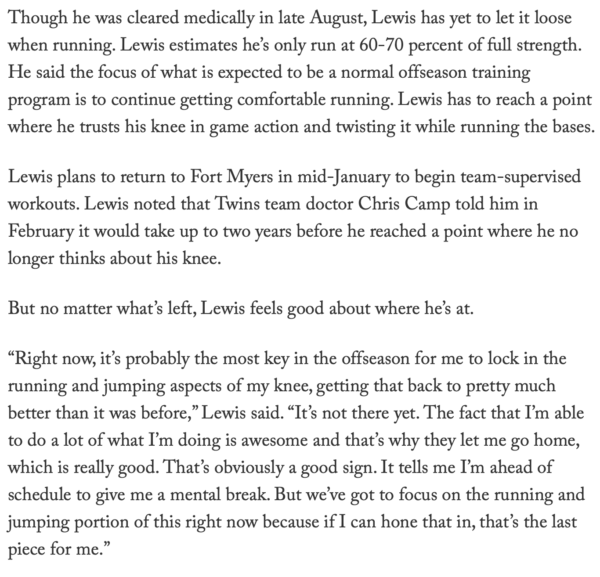 He still has a ways to go before he will be ready to make an impression and potentially play. There is minimal to zero concern of him not being added to the 40-man roster and he will undoubtedly remain a member of the Twins.

I wrote about him back in August, doing a deep dive on one of the most impressive prospects in all of baseball in 2021. It will be interesting to see if the Twins believe in him enough to possibly deal Josh Donaldson (and his $21.75 million contract) in order to make room for Miranda, since having a 36 year old on a rebuilding team doesn’t necessarily make the most sense. It would also free up enough money to possibly go sign some starting pitching, which is something that the Twins desperately need. This offseason might be the perfect time to deal him too, as he had a relatively healthy year and his price may never be higher. Regardless of what they decide to do with Josh Donaldson, Miranda will most certainly be added to the 40-man roster.

One of my personal favorites of all Twins prospects, Vallimont didn’t just take a step backward this year in terms of production, but rather it was more like a leap.

All of this is simply atrocious. The biggest problem to me here isn’t the jump in ERA (which is concerning), the massive hike in home runs allowed (which is very concerning), but rather the number of pitches thrown. This, alongside the uptick in walks and batting average, shows that he had trouble finding the strike zone all year, was throwing too many pitches per outing, and just wasn’t locating the ball at all. While it wouldn’t surprise me to see him unkept in this Rule 5 Draft, it would be disappointing (to me anyway) because he was so promising after his 2019 season, and I feel like there’s a quality arm there to be had with just a little more time. Still, it would be understandable to see him go and I think undoubtedly he will be picked up elsewhere.

There is a very good chance that had he not been injured, Winder would have been given an opportunity to join the Twins in September as some sort of tryout. He was dominant in both Double-A and Triple-A this year, as his added velocity really came into play for him in both his fastball and curveball.

Josh Winder struck out the first two Triple-A batters he faced and needed just seven pitches to do so.#MNTwins pic.twitter.com/OeIyKcLiJk

A shoulder issue limited his output to end the year, but there is a ton of hope for the future with Winder. He will be kept and, if healthy, he has a chance to start for the Twins in the spring.

Another right-handed missile thrower, Sands pitched through three levels in 2021, beginning the year in A Ball and finishing the year in Double-A. No matter where he pitched, however, the same was true: mid 90’s fastball, a grade 55 curveball, and a promising changeup. Despite the injuries this year, he still managed to strike out 96 batters over 80.1 innings pitched and makes for an intriguing arm for either a late September call-up or a 2023 Spring tryout. Either way, I expect him to be kept and further developed.

After missing time in 2019 with an injury and being unable to do much of anything in a missed 2020 season, all was looking gloomy after a miserable start to the 2021 season for the infielder. His numbers looked ominously similar to his previous year and were pedestrian at best. Wanting to get the most out of him, the Twins surprisingly promoted him to High-A, and the 22-year-old responded in a big way, finishing the year with a .321/.414/.493 line, alongside three home runs, one stolen base, and seventeen runs batted in.

It was a nice wake-up call for a guy that they believed in, which makes it a difficult decision heading into this draft. He was left unprotected last year and went unclaimed, but now, after a scorching second-half upgrade, will the Twins (or another team if he goes unclaimed) take a chance on him? If I had to guess, I’d say that the Twins let him go and hope that he doesn’t turn into this season’s Akil Baddoo. For those that don’t remember, Baddoo was left unprotected by the Twins last year, claimed by the Tigers, and subsequently excelled with his new team. Could that happen again, this time with Yunior Severino?

A very promising pitcher, Enlow, unfortunately, got injured and required Tommy John Surgery this year, making the decision even tougher. While injured players can be claimed in this draft, they can be put on the team’s Injured List while hurt, but are required to be placed on the active big-league roster as well for at least 90 days in order to be retained. For Enlow, that means that one team, Twins or other, will need to believe in him enough to warrant a spot and want to rehab him. My guess is that he remains off of the 40-man roster and goes unclaimed.

Overall, the Rule 5 Draft will be an interesting development for the Twins. They have a direction in mind, and this draft will be an indication of where the team is headed. That being said, how far away the end goal will be and who will be along for the ride remains to be seen. There are rumors of the Twins wanting to build a pitching staff unlike anything that’s been seen before in baseball. In short, this would consist of using and utilizing hybrid pitchers to pitch more than one innings per outing, but also less than the traditional starter would (i.e., a quality start). The reason for this is that there are some unknowns in the free agency/trade markets while also understanding the tools that they have within their minor league system. While nothing is set in stone, it could signal a direction that the organization will be taking in this draft. Needless to say, it will be quite the interesting offseason for the Minnesota Twins.