As we approach an unprecedented shortened Major League Baseball season later this month, the Twins’ Minor League Baseball system remains stagnant and unused this year. Never fear, my friends, because every team was required to announce a 60-player play pool with major and minor league players from their system. This player pool, complete with players that will participate in major league games and minor league prep at a different location, will be filled with opportunities for player development and replacement, should the unfortunate situation warrant itself due to injury or illness. The Minnesota Twins released their list, and it’s a doozy. For reference, here it is: 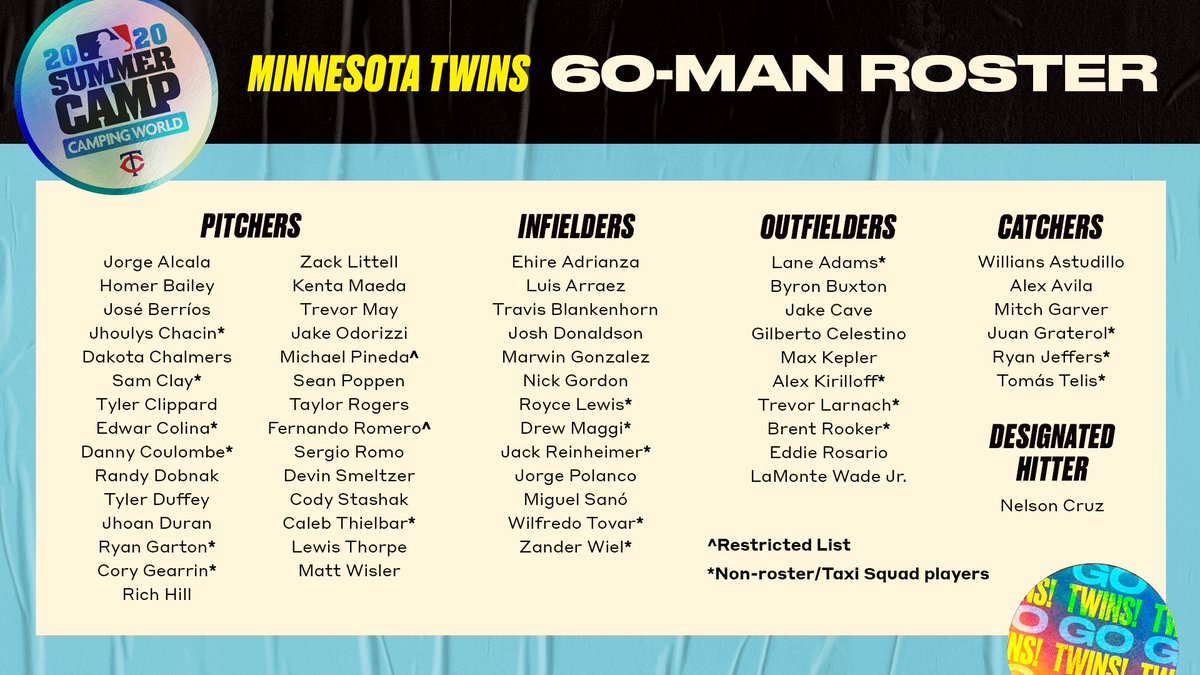 It’s an interesting list. The question then becomes: which prospects will get an opportunity to play this season? Unfortunately, the answer, which isn’t necessarily easy to answer, comes along with a morbid condition. A lot of it depends on if and when the Twins’ starters either get injured, opt-out of playing and/or get sick with the Coronavrius. It’s really unfortunate, but it’s also the reality of the situation.

Let me begin by saying that the situation of the world is far more important than the game of baseball. These are real human beings going out there daily to play a game and putting their health at risk by traveling. My heart goes out to them and their families as they approach this season. That aside, the following is purely based on baseball and the game everyone has agreed upon to play.

Here are some notes and projection possibilities for some of the the hitters involved in the player pool. There are some that could make an impact right away, while others are there for refinement and development and will probably never play (unless dire the situation). The probability of a player playing will be based on the fact that I (unfortunately) do for see players losing time to the virus. Also, for reference, I will be quoting my Twins Top 50 prospects column:

What I said then: It’s now or never for Rooker, as he’s been around since 2017 and is an old(er) old prospect at the age of 25…..I’m not saying that he has the production potential of Cruz, but rather that he would benefit from not having to put on a baseball glove.

What I say now: Rooker has power and is Major League ready. He might actually be the first player called up, as who really knows when Nelson Cruz will start to slow down. He could also prove me wrong and do well in the outfield as well. All that being said, he looks like a late-game power-surged substitution that could win the Twins a game.

What I said then: Power, discipline, aggressive are all words to describe his approach. I still think he is going to be their first baseman of the future, and will therefore need time to adjust. It remains to be seen if there will be a place for him on the major league roster in 2020, or if consistent playing time in the minors is the way to go for him.

What I say now: While he needs the time to get used to playing first base, I think that the competitive Twins won’t necessarily need him up just yet. It looks as though Miguel Sano has all of his legal problems under control, and an opportunity due to illness or injury may be Kirilloff’s only way up. Sano has tested positive for Covid, but looks to be asymptomatic. Perhaps staying with the Taxi Squad and learning all season is his best bet before debuting in 2021. On a personal level, I’d love to see him get a few at bats.

What I said then: As he gets better accustomed to higher level hitting, I feel like he’ll be able to fully tap into his power, using his strong lower body to turn those doubles into home runs. He may be blocked by what the Twins already have in the outfield, but he could force his hand if he does get the chance this year. After all, Byron Buxton isn’t the healthiest player in the world.

What I say now: While Larnach is the shiniest new toy in the Twins’ system, I think that another year of refinement is best here. Rooker is probably the first man up for the outfield, and Kirilloff is better suited for a call up. I think the Twins want to see him do it again before they trust him to help them win a title with a very deep crop of outfielders.

What I said then: He went out in 2019 and hit for 8 more home runs than before, stole 5 more bases and raised his batting average 45 points, all while striking out less.

What I say now: Despite a very poor Spring Training, Blankenhorn’s progression should not be deterred. He grew a lot last season, and being with the Taxi Squad will do wonders for even more development. A late season call up could be possible if the Twins need depth due to injuries and illnesses.

What I said then: He actually posted a decent stat line of .298/.347/.459 with 4 home runs and 14 stolen bases. Nothing wrong with that, and there is a place for batting average in fantasy baseball.

What I say now: My view since that Top 50 list has changed since then, but not by a lot. Gordon’s improvements year after year have been small, despite being progressive. He has unfortunately tested positive for Covid. I haven’t heard whether or not he is asymptomatic or not, but here’s hoping he has a speedy recovery. If he does get himself back, he could find himself on the main roster as he’s spent enough time in the minors. A shortened 2020 is as good a time as any for potential quad-A players to make their mark. There’s a place for his contact and speed potential in a condensed fantasy baseball season this year.

What I said then: A .277/.349/.410 line doesn’t stand out as anything special, but, in 2019, he walked almost as much as he struck out, he stole 14 bases and had an above average exit velocity. He’s somewhat of an under the radar type of player who could surprise people in the near future.

What I say now: In a perfect world, 2021 would be the time for a mid-season call up to the Twins, but if 2020 has taught me anything, the world is far from perfect. That said, he is on the 40-man roster, so he could have the edge over other, better prepared outfielders who are not.

What I said then: Lewis still has the potential to be elite. He is a future 5 tool player with tremendous athleticism and work habits. I still believe in the talent that’s in there and feel that 2020 will be his year to shine.

What I say now: If there is a list of players from the Taxi Squad that the Twins would want to use in games, my guess is that Lewis would be near the bottom. They have a lot invested in him, and a lot of faith that it will all pan out. Rushing him to the Majors is not part of that plan.

What I said then: The success of Mitch Garver certainly put a damper on any Jeffers call up for starting time, but that doesn’t mean Jeffers is any less of a catcher….He’s a few years away from being relevant, but, long term, the potential is there.

What I say now: It would take an injury to Garver to give Jeffers any chance of playing. The Twins have Alex Avila and Willians Astudillo (who unfortunately tested positive for Covid) as backups at a position in which they seem set.

What I said then: He’s someone that could be up with the Minnesota Twins all season, and someone who has worked hard to overcome injuries from his past. Unfortunately, it’s those injuries that may have diminished his velocity somewhat, causing him to work on other pitches, like his curveball which seems to be getting better.

What I say now: He was fighting for a rotation spot earlier in the off season, and the return of Rich Hill hurts his positioning a lot. That said, I don’t see him not pitching for the Twins at all this season, even if it’s in a relief-type role.

What I said then: Given that he is just under the minimum for innings pitched to lose minor league eligibility, and that he was pretty decent in his showings with the Twins last year, look for Smeltzer to graduate to major league status soon.

What I say now: Good control, had some nice outings, and will be a nice piece for the Twins if they need to give starters a rest of minimal innings.

What I said then: Cody made some appearances for the Twins in 2019 after 2 solid bullpen seasons in the minors…..I project him for effective middle relief for 2020 and beyond, and maybe the odd spot start.

What I say now: I see the same for him this season. He and the aforementioned Smeltzer will give the Twins some welcomed and much needed depth during a condensed scheduled season.

What I said then: Over both A and A+, he flourished with a 2.69 ERA, 0.98 WHIP and 129 SO over 93.2 IP, which included a perfect game back in May for Fort Myers. The true test to see if these numbers are legitimate will be how he handles AA hitting. I’m guessing he will be given more innings to handle in 2020, and if all goes well, we could see him in my top 3 prospects heading into next season.

What I say now: The Twins have long term plans for their next big thing. There is no need to rush him up to the Majors for a few innings where he could struggle and lose the confidence he’s gained to become on the verge of being elite. It seems like a safe bet that he remains with the Taxi Squad for learning and development and only gets the call under the most dire of circumstances.

What I said then: Known for his velocity, he needs to reduce his walk rate. Other than that, he is projecting to be a nice mid rotation starter.

What I say now: My assessment of him within the Top 50 was an understatement. He’s got the tools to be a starter or even a top reliever. As part of the 40-man roster, he could see some time in non-pressure situations and give him some Major League experience.

What I said then: A do or die season for him, Chalmers was added to the 40-man roster in the off season. Coming back from injuries is never an easy thing, but he’s someone to monitor and perhaps take a low-risk gamble on to bounce back in 2020. He should make it to the Twins at some point with, at least, a minor role.

What I say now: I could see him coming up, like I said, for a minor relief role, and nothing more. It would be primarily to see if there’s anything relevant for the future. He struck out the side in his only inning pitched during Spring Training, so there’s something to build on.