Bobby Bradley has always been a volatile and controversial prospect. His immense raw power has tantalized since he was taken by the Tribe in the 3rd round of the 2014 Amateur Draft. But there have always been warts, and fairly significant ones at that. He is dinged for his first base only profile, which is probably more of a DH only profile at the big league level.  His strikeouts have always been a huge red flag, with a 27.3% K-rate throughout his minor league career. Finally, Bradley has been in a winning organization that seemed like it would never have a need for a three true outcome DH with a very questionable hit tool at the major league level anytime soon.

Fast forward to 2019 and the Indians are one of the worst hitting teams in baseball.  They rank outside the top 25 in hits, runs, and home runs while former all-star Jose Ramirez has slumped to a .204 average with 4 HR. Their current DH Jake Bauers certainly isn’t setting the world on fire with a .214 AVG and 6 HR, but they did give up the Herculean Yandy Diaz to get him so they may be less apt to sit Bauers. While they remain in second place behind the suddenly relevant Twins, they are 10.5 games out and can’t seem to gain any ground.

For a team that clearly needs a power boost stat, Bradley clearly seems to be the guy who should get the call. He leads the International League with 17 HR and his 46 RBI are tied for 2nd. He has his average all the way up to .284 after struggling to a .224 mark last year. His OBP sits at .352 from .308 and his slugging percentage has taken a huge jump from .466 to .592. On the surface these numbers look fantastic, but do the underlying stats back up this breakout? 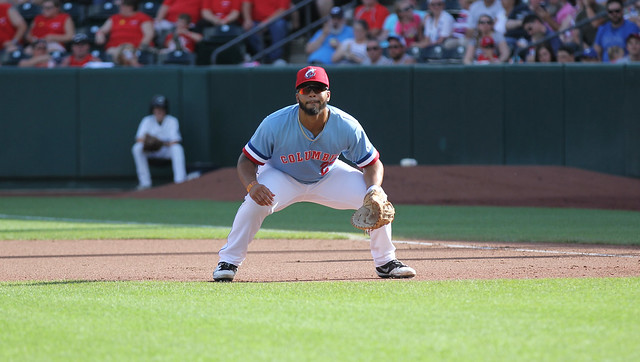 2019 marks Bradley’s second taste of AAA as a 23-year-old. The numbers above do show some improvements and he seems to love the new juiced AAA baseballs as well. However Bradley has not improved upon his BB% or his alarming K% from last year. He has posted an 8.6% so far in 2019, the exact same number he up in Columbus in 2018. While that is a fairly average walk rate, it is not what you want to see from a K-happy power hitter. Furthermore, he is still striking out 1/3 of the times he comes to the plate. While we are in an era where teams will stomach high K-rates if there is ample production otherwise, that number could spike even higher against major league pitching.  Finally, his average is ready to plummet as it is buoyed by an absurd .364 BABIP.

In other words, this isn’t a different version of Bobby Bradley. He walks a bit, K’s a TON and has mammoth power to go along with a low average unless he manages to sustain a BABIP above his career norms. These are essentially the same bullet points that could be found in his scouting reports when he was drafted back in 2014. Bobby Bradley is not the player to save the Indian’s season or fix all of their troubles in 2019.

#Indians minor league leaders in (HR’s) since beginning of 2018 season:

That said, with Bauers struggling mightily in Cleveland now might be the time to give Bradley a shot to see what he can do. Bauers has been sitting against lefties due to his weak .203/.277/.390 batting line against them this year. In contrast, Bradley’s splits against lefties look good, with a .259 mark and more HR (9) vs southpaws than against righties (8) and he has never really had issues handling LHP in his MiLB career. Despite the red flags that point to an inflated average, the power is still very real and there is a chance he could put up better numbers than Bauers.

Bobby Bradley is still a flawed hitter, but frankly the Indians don’t have much to lose if they want to see how he handles the big leagues.

#Indians No. 6 prospect Bobby Bradley has put up big numbers before, but this season with @CLBClippers is shaping up to be his best yet.

About John Stewart 9 Articles
John Stewart is a graphic & website designer, event promoter, and baseball enthusiast based in Louisville, Kentucky. He has been obsessed with minor league baseball since childhood, as the AAA Louisville Redbirds (now the Louisville Bats) were the only local team...which is still the case today. Now a season ticket holder, John enjoys watching top prospects as they come through town, as well as purchasing far too much cotton candy for his kids throughout the baseball season. Follow John on Twitter at @jonance.

Who’s Next? The 51st Prospects