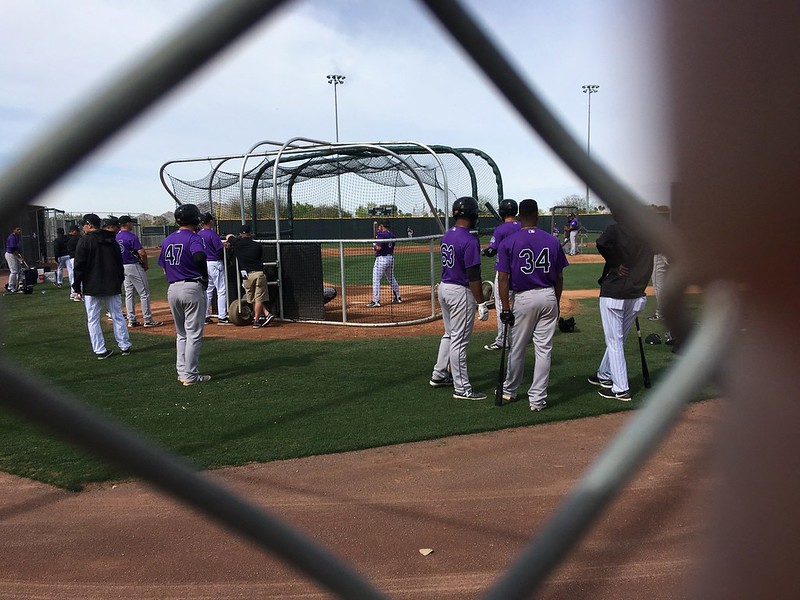 Colorado Rockies hitters take batting practice on the back fields at Salt River Fields during the morning of March 7 before a Spring Training game against the Rangers.

My first spring training, in 1988, was a rainout. I had driven from Boulder, CO, where I then lived, to Phoenix Municipal Stadium to see the Bash Brothers, Jose Canseco and Mark McGwire. It began to rain about an hour away — a real gully washer — and though the sun was out by the time I got to the ballpark, it was a no go. Still, it was sunny and warm, if wet, and the palm trees swayed and the birds sang and the snow and cold of Colorado were behind me.

I did get to see the Bash Brothers that spring (A’s batting practice was a blast, literally) and much more. I ended at Hi Corbett Field in Tucson, where the Cleveland Indians then trained, and it was my favorite ballpark. I never had more fun in Spring Training than I did at Hi Corbett, first with the Indians and later when the Rockies were resident there. The longest home run I ever saw came when Andres Galarraga, The Big Cat, hit one over the center field fence at Hi Corbett.

Much has changed in Arizona in the past 30 years. In fact, only Tempe Diablo Stadium remains in use from those days. The Mariners left Tempe for a new two-team ballpark in Peoria; the Padres joined them there from Yuma; the Angels moved from Palm Springs, CA, to Tempe; the Brewers moved from Chandler to Maryvale; the Dodgers, Indians, Royals and White Sox moved from Florida to Arizona; then the Rockies, Diamondbacks and White Sox from Tucson to Phoenix.  I miss Spring Training in Tucson; when I worked nights on the copy desk for the Arizona Daily Star there, I could have lunch at a Rockies, Dbacks or Chisox game and catch five or six innings before going to work. Splendid.

I also spent years visiting Spring Training sites in Florida. The Nationals in Viera, Astros in Kissimmee, Cardinals and Marlins in Jupiter, Pirates in Bradenton, Rays in Port Charlotte. Again, my favorite years were those on the night desk editing copy for the Lakeland Ledger. There were four ballparks nearby then, the Tigers in Lakeland, Reds in Plant City, Red Sox in Winter Haven, Royals in Baseball City; I could down a hot dog and beer and catch a few innings at one of those parks, then head for work. My editor there, after learning I was a baseball fan, draped his arm around my shoulder and said, “Parnell, just remember, all sins are forgiven during Spring Training.” A helluva great place to work.

I loved the confines of the park in Winter Haven, a really intimate place, and last saw the Indians there before Hurricane Andrew destroyed their brand new and as yet unused park in Homestead and they packed up and went back to Arizona. But the best Spring Training experiences I ever had were in Vero Beach, at Dodgertown. You could catch a smile from Vin Scully, enjoy a Dodger Dog in the company of Dodger greats; feel like you were watching major leaguers in a Little League park. To leave the field, players had to walk through the stands to get to the locker room. If you sat on the end of a row, you could say, “Good job, Mike” as Piazza walked up the stairs wearing the tools of his trade, passing only inches away.

Spring Training is no longer so intimate, there or anywhere, but it remains the most intimate and fun experience you can have on a baseball field or in a baseball park. I’ve just returned from a few days in Arizona, catching four games in three days. The sunshine was delicious, the palm trees and birds inspiring, the temperatures in the balmy 70s and 80s. The hot dogs and beer taste better, and the baseball is right in front of your face. Only the Phoenix traffic diminishes the experience, as MLB’s national baseball writer Richard Justice said on a recent podcast, “Driving five miles in Phoenix takes somewhere between six minutes and infinity.” 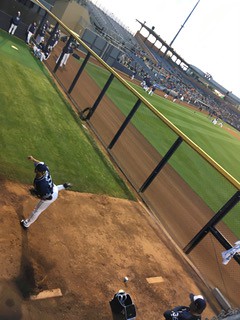 Dinelson Lamet warms up in the Padres bullpen before a Spring Training game against the Diamondbacks on March 5 in Peoria.

I followed the Rockies and Diamondbacks to the refurbished park at Peoria, seeing them play the Padres and Mariners on consecutive nights. A good experience, a lot of fun. But my first visit to Salt River Fields at Talking Stick, where the Rox and Dbacks share a facility on the Salt River Pima–Maricopa Indian Community near Scottsdale, was excellent. I saw the Snakes versus the Angels and Rockies play the Rangers, and both games were a thrill. 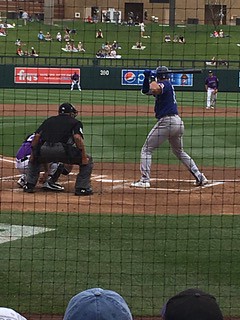 Rangers first basemen Joey Gallo is about to hit a home run at Salt River Fields on March 7 during a Spring Training game with the Rockies.

The park is exemplary, with good food, drink, seating and amenities. But my favorite part of Spring Training is going to the back fields early, before the games. I showed up both days about 10 a.m. to catch the teams in batting and pitching practice. This is where to get the best autographs if that’s your thing, where you can watch scribes like Peter Gammons and Jon Heyman do their work and MLB Network stars like Brian Kenny and Carlos Pena ply their trade. 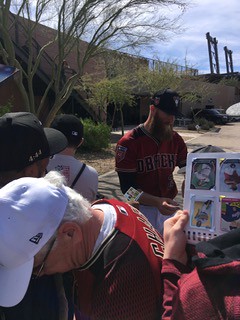 You can really see the players up close, and you enjoy a sunny Arizona morning watching guys take swings or pitchers work on their pitches. You might even catch a B game, as I did when the Rox and Rangers minor leaguers squared off on a back field before the main event. There were fewer fans there than at a regular Little League game, and you feel as though you’re part of something special.

It’s hard to put spring training into words, but it’s a feast of sights, sounds, smells and emotions. You gotta go, if not this year, next. Make it a plan. You won’t regret it.

I did have a few observations about prospects after my Arizona trip:
1. Ryan McMahon (#2 on my Prospects1500 Colorado Rockies Top 50) can hit, and may get most of the at-bats in a platoon with Ian Desmond at first base this season. McMahon’s defense is solid but not yet above-average. Nolan Arenado’s defense at third may suffer a bit from not having an exceptional fielder over at first this summer. Arenado makes incredible plays, but he needs a first-bagger who can dig balls out of the dirt to complete them.

2. Garrett Hampson (#7), a minor league second-baseman for the Rox, won’t make the big club this spring but he has turned heads with his bat and his legs. He has future star power.

3. Brendan Rodgers, the Rockies’ #1 prospect, has had a solid spring and remains on track to fill a middle-infield spot in Denver. Probably not this year, absent injury, but likely in 2019. 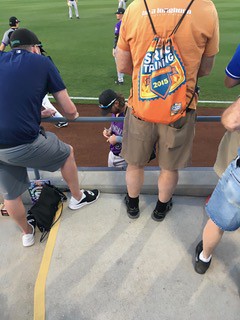 4. Pitcher Yency Almonte (#13) has had a good spring and probably will spend time in the Rox bullpen this summer. He throws hard. Lefty Sam Howard (#14) has looked good and could be called up in the event of injury to the starting rotation. He’ll be a solid contributor. Several pitchers have showed well enough to have a relief role this summer, most likely among them righty Jairo Diaz (#43).

5. Since the Rockies re-signed Carlos Gonzalez for another year, it’s hard to see how there’s any room for a minor leaguer in the major league outfield. Former prospects David Dahl and Raimel Tapia are scrapping for playing time, but Mike Tauchman (#26) has torn the cover off the ball all spring. If he doesn’t make this club, he may have showed enough to garner an outfield spot for someone else.

6. The Angels’ Shohei Ohtani has had an uneven pitching performance this spring and hasn’t shown he can hit major league pitching. He looks good going 0-for-4 at DH though. Small sample sizes should be kept in perspective; Ohtani looks like a ballplayer. 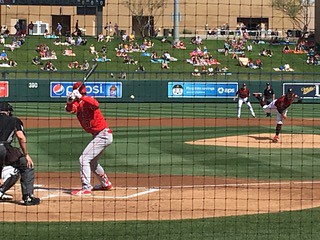 Zack Godley fires a fastball past Shohei Ohtani during the Diamondbacks-Angels Spring Training game at Salt River Fields on March 6.