Ah, Lake Elsinore. Home to a pretty special lake (apparently) and perhaps more importantly, home to the San Diego Padres’ Low-A affiliate, the Lake Elsinore Storm. Located about 45 minutes north of San Diego, the Storm has been in existence since 1994. Last Saturday (June 12), I decided to visit them to experience all that Lake Elsinore Diamond offers.

Lake Elsinore has had some notable alumni such as Jake Peavy and Khalil Greene and for tonight’s game, I was particularly excited to check out Robert Hassell III (#3 on my top 50) and Joshua Mears (#12) as well as Kendall Williams (#14 on Nate Eckert’s Dodgers Top 50). I had visited the stadium before about 10 years ago seeing my buddy play but I was still excited to see what was in store for me. The entrance was easy, and it should very well be since parking cost me $16. Yes, $16. Granted, that was close parking and I am pretty sure if you really wanted to, you could get into the other lot for free. The only thing stopping you is a sign that pleads for you to pay for parking online beforehand. Either way, the stadium itself is intimate and has a beautiful backdrop of the foothills. For $20, you get seats a few rows from the field and there really isn’t a bad seat in the house. 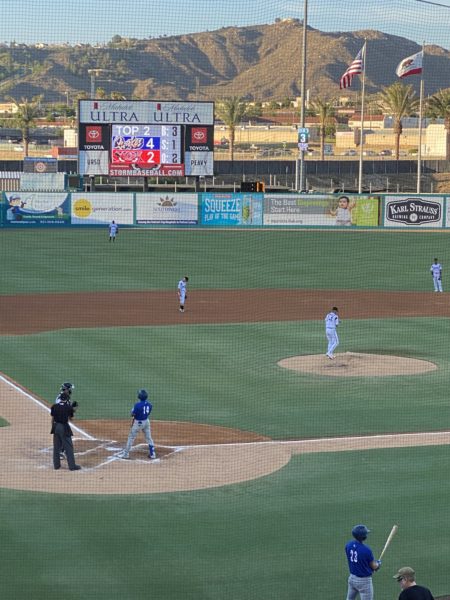 Perhaps the most important thing to analyze is the food. I would say the concession stand was comfortably above average, especially when compared to other minor league stadiums in the area. No offense to my hometown Rancho Cucamonga Quakes, but most minor league stadiums around offer the basics of hot dogs, nachos, light beer, and popcorn. Lake Elsinore has all of that and offers some interesting other items like a particularly delicious loaded fries option and some very nice craft beers. The prices are decent and what I like best is that when you are in line you can still clearly see the action on the field so you are never missing a pitch. 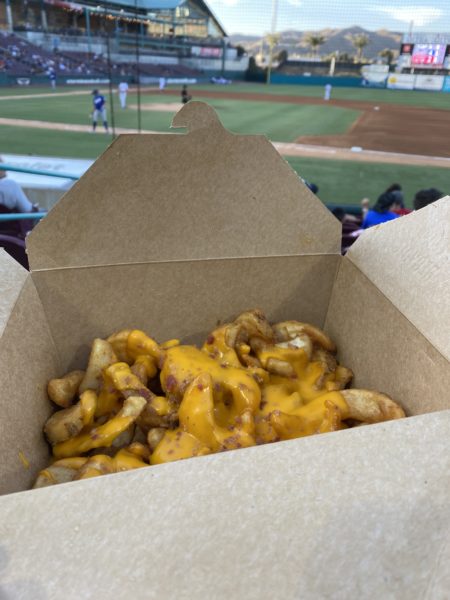 Some pretty unique suites sit in a very small upper deck for a minor league stadium. It definitely looked like that is where the party-goers were located, as you could stretch out and still be right on top of the action. One group even started a very creative chant of “baseball” for a good 2 minutes. I’m not making that up. Plenty of fun to be had here with your typical promotions and giveaways and even the apparently very popular baby toss!

Of course, if you’re reading this site, then you are also very interested in the players on the field and I wouldn’t be doing my job if I didn’t talk about the action. One player stood out above the rest and looks as cool as the other side of the pillow. His name is Robert Hassell III. I don’t know too much about the previous editions in the Robert Hassell family, but I am very confident that this version is the best yet at hitting baseballs. His swing is so effortless and smooth that you forget this guy is 20 years old. His second at-bat consisted of a no-doubt 3-run home run to right-center (below) and while there is a case to be made about the small stadium that is a bandbox by the lake, that ball would have been out anywhere.

Of course, a home run is always going to be the main story, but his third at-bat is worth talking about as well. Facing an uptick in velocity (Braydon Fisher), Hassell was clearly behind on a high fastball. Yet, with his elite bat-to-ball skills, he was able to dump it into left field for a clean single. Very encouraging to see, to say the least, and with Hassell up to 4 home runs already on the season the power is clearly picking up as well. There is a lot to like about this kid. So much so, in fact, that I am very seriously moving him above MacKenzie Gore in my Padres Top 50 prospects midseason update. And no, that’s not even crazier than $16 minor league parking at this point.

Another guy that I was excited to see in person was Joshua Mears. A high riser in my last update, albeit for reasons not entirely related to him, the outfielder has a lot of people excited. His first at-bat it looked like someone had dared Mears to swing at every pitch no matter what. It wasn’t pretty and resulted in a strikeout. His next time up, in the same inning that Hassell blasted his home run, Mears hit a missile (also below) that deafened many ears in the audience. It was eye-opening power and a reminder of the skills that are here. He also stole his 7th bag and looked remarkably quick. The first at-bat should be a harsh reminder that there is a long way to go and I don’t know if he will ever bring a good hit tool, but there is a lot to work with here. And let’s not forget that this system is getting bare, so he is going to naturally stand out. Mears has a special talent and worth gambling on now before some of his home runs become viral.

Others Prospects of Note

It was quite fulfilling to have the guys I was most excited about ball out in my first live look at them. However, I also feel the need to talk about a few players that caught my attention as well, even if they weren’t Padres farmhands.

He looks like he wants to be Dustin May. The leg kick, the hair, and the attitude. He nailed it. What he forgot to really focus on was the command. He literally hit the first batter with his first pitch, square in the back. I have only ever seen that with Ronald Acuna, and with all due respect to Jarryd Dale, I don’t think that this situation was like that one.  He was all over the place and looked to really struggle to repeat that notorious leg kick. The stuff looked strong though and he is still young enough that I came away fairly impressed. Before the 5th,  he only gave up 1 hit, but runners were constantly threatening his entire start.

I do feel a little dirty talking about two Dodger prospects here, but Lewis really was impressive. He made two spectacular plays in the field at third base and had two walks with some hard outs as well. He just looked really athletic and is a below-the-radar guy that I would monitor closely.

My #47 guy impressed me enough to mention him here. My biggest concern was the bat speed, but it looked really good in his 5 at-bats as he laced three singles. Every time he came up, I was impressed with his approach and doing the things that an old-school #2 hitter should do. He has 8 stolen bases on the year to go along with two homers as a 19-year-old. He is a prospect and one that is more advanced than I originally thought, considering his current age.

There is always one guy at these games at this level that just dominates for no particular reason. Tonight, it was Sauryn Lao, the first-baseman for the Quakes. He hit two no-doubt home runs in his first two at-bats that drew plenty of oohs and ahhs from the crowd. I didn’t know much (anything) about him but he looked like an absolute monster. That is what makes the minor leagues so fun. You never know what you are going to see.

Low-A West (still strange typing that) has some elite talent to check out and if you’re close, Lake Elsinore is a great place to do it. You will always get to see Robert Hassell and Joshua Mears, plus if you time it correctly you can also get a look at Marco Luciano, Tyler Soderstrom, or Noelvi Marte depending on the night. I can’t think of too many other activities in the area that can top that!

My goal is to provide an unique perspective when it comes to baseball so that readers can have the information and insight, as well as a bold and progressive analysis. I trust the analytics, but I also trust my eyes when I see the player perform on the field. I don’t want to regurgitate the same, old information but rather I want to give my opinion that is based on research and well-developed thought. Baseball is a game on intricacies and delicate balances and I want to explore every facet that I can. Here on Prospects1500 I will give you the inside scoop on the prospects so that you get to know who they are before everyone else. I won’t always be right, but I can promise my logic and dedication will be sound. Feel free to reach out to discuss and debate and let’s get to prospecting!