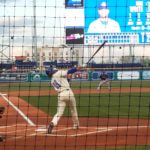 About Christopher Williamson 6 Articles
Chris Williamson is the Rockies correspondent here at Prospects1500. He lives in Denver and is a member of The Rocky Mountain Chapter of the Society for American Baseball Research (SABR). Being a member of SABR has given him the opportunity to attend some great events and meet some Rockies insiders. Chris is also a diehard dynasty fantasy baseball participant. He is currently in 2 dynasty leagues, one with 30 minor league roster spots, and one with 40 minor league roster spots. Check out more from Chris on his new website: makeprospectsgreatagain.com. GO ROX!