As May draws to a close I wanted to put the focus on two hitters in the Nationals farm system. In a minor league organization that lacks numerous “top level” prospects, these are two players I thought deserved a little bit of a deeper look than just boxscore stats and industry chatter.

The Nationals picked Canning in the fifth round of the 2018 MLB Draft. Canning had an excellent college career at Arizona State, where he improved each season. He hit the ground running after the draft has it swatted 2 home runs in A- and was quickly promoted to A. He struggled a bit in A-ball, hitting only .223/.294/.411 and his season ended after 31 games due to injury. The Nationals were conservative with his initial assignment and he started the year at A-ball. Then in a surprising move, Canning was promoted to A+ ball. This is surprising, as Canning was not performing well in A. His walks were down to a 6% clip and K% was up to 29%. However, his SwStk% was down to 16% which would indicate Canning was being a bit too patient at the plate. When he was drafted there were a few scouts concerned with his bat to ball skills, or I guess lack thereof. Canning has a pull-heavy approach and is starting to hit more of those balls on the ground. 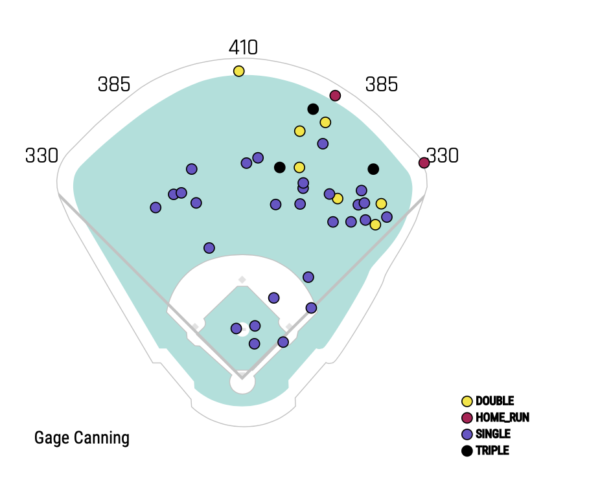 This will make Canning more susceptible to the shift and it is an area he will need to work on if he wants to make it to the big leagues. Even if he works on spraying the ball all over the park, Canning profiles to be a fourth outfielder at best.

The Milwaukee Brewers draft KJ Harrison out of Oregon State in the third round of the 2017 amateur draft. He performed very well in his three seasons in school, where he hit .313/.382/.498 and scouts were enthralled with the possibility of a bat first catcher. The Brewers assigned him to A- after the draft and he performed well at the plate. He struggled, unfortunately, behind the plate. After that season, the Brewers begin playing him more and more at first base. In July of last year, the Brew Crew swapped Harrison for Gio Gonzalez in a push to make the playoffs and run at the division title. Harrison did not play after being traded and the Nationals assigned Harrison to A to begin the 2019 season. Harrison was killing the ball to begin the year. Now exclusively playing first, he was hitting .404/.485/.649 with a career-low 15 K% and career-high 12 BB%. After 16 games of destroying the hopes and dreams of A-ball pitchers, the Nationals promoted Harrison to A+. Harrison has continued to hit well, just not as well. His K% has increased to 17%, which is mainly due to an increase in SwStk%. The walk rate has actually increased from 12% to 13%, so it is very encouraging to see Harrison perform well with his promotion. Harrison has an all fields approach, so he should not be affected too much by the shift as he makes his way through the minors and into the majors. 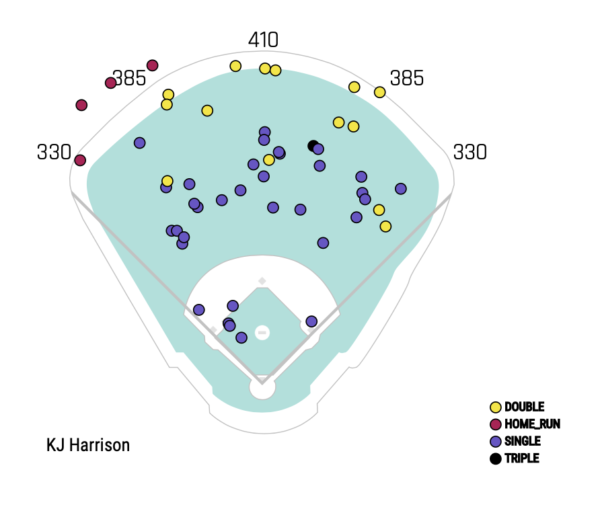 As mentioned previously, Harrison has moved from behind the plate and has played all but one game at first, that other game he was manning left field. If Harrison hopes to make the majors, he will need to continue to produce at the plate. If only he was able to stick behind the dish, he would have made an excellent addition to your fantasy league.