Wentz features plus stuff.  His fastball sits 91-93 but he can touch 95-96 with ease.  Last season when I saw Wentz playing for Rome, I saw a pitcher that used his fastball to locate in all four quadrants of the zone.  The FB had excellent arm side run.  He would front door right handed hitters with a 2-seam action and then run the FB away.  His changeup, at 80-81, displayed plus fade and is easily his best pitch.  The curveball was a hammer.  At 76-79 m.p.h., Wentz would throw it to both LH/RH hitters.  Maybe I saw Wentz at his absolute best.  He did take a 1-hit shutout into the 7th inning before allowing tw solo home runs.  But my biggest take away was his poise, command, and the ease with which he dispensed the Asheville Tourists’ lineup.

Fast forward to 2018, Wentz was easily a top 50 prospect for me.  He had and still has the ability to surpass Kyle Wright and Kolby Allard on the Braves pecking order.  However, 2018 has not been kind to Wentz.  I’ve seen two starts.  The first was against the Lakeland Flying Tigers.  Their lineup featured Daz Cameron and Isaac Paredes.  Wentz entered the game with a 1.96 ERA and 5 BB in 18.1 IP.  In 2.2 IP, Wentz walked 5 hitters, gave up 4 hits, and 4 ER.  He fell behind 9 of the 15 hitters he faced, throwing 76 pitches – 42 for strikes.  Most of his fastballs were up in the zone.  His release point was off. 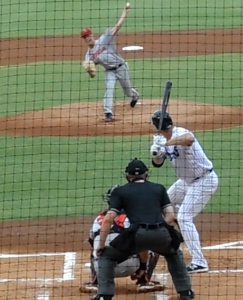 The picture on the left is the most recent start from May 11.  Notice Wentz’s stiff front leg and where his hand is in relation to the picture on the right.  The pic on the left is right before release.  Pitching is about rhythym and the arm has to be in sync with the hips.  Wentz has been unable to stay on top of the ball and pitch from a downward plane.  Something that he excelled at in 2017.

In his most recent start on May 11, Wentz walked 6 batters and hit 1 in 1.2 IP.  He threw 64 pitches – 28 for strikes.  So what could cause a pitcher to lose rhythym?  It could be injury.  Wentz has not pitched since May 11.  Injury to the shoulder or elbow would cause the arm to slow down through the zone, throwing off the necessary timing.  At this point though, Wentz is still active despite not pitching in 10 days.  Part of that is due to rain in Florida that has obliterated the schedule lately.  The rest should do him good.  If there is a nagging shoulder injury that he is trying to play through, the lack of fluidity and command of his own mechanics could lead to worse injury.