With over a month gone in the MLB season, there’s been a lot of exciting action in the Pirates organization. We’ve seen quite a bit of movement up, down, and around their minor league system.  The Pirates have used 10 rookies thus far this year, so they are definitely a team to watch moving forward as they try to deal with the suspension to Starling Marte and the injuries to key contributors in Jameson Taillon, Adam Frazier, and David Freese. Ranks are from my preseason Pirates Top 50 Prospects list.  Let’s get right into the update!

Playing with the Big Boys:

Bell was only barely eligible to be a rookie this year, so it’s absolutely no surprise that he graduated early.  He’s off to a fine start this year, slashing .245/.330/.441 with 5 HR and 1 SB.  It’s never going to be a huge power bat with him, but he will always provide reasonable value.  Note that he’s going to be more valuable from here on out in OBP leagues, as we suspected.

There was something of a kerfuffle back when I originally ranked Glasnow #5, and the results have borne out my concerns.  In 6 starts, he’s walked 19 batters and given up 33 hits, resulting in a very ugly 6.33 ERA.  There’s some hope in his .353 BABIP and 4.72 FIP, but until he can solve his 3rd pitch issues and regain some of his fastball velocity (down to a 93.8 MPH average), I’d stay away this year.

Diaz was only up briefly last week, but he remains the same that he’s been for some time now-excellent defender, questionable bat, and a more-or-less guaranteed spot somewhere in baseball for the next 6 years.

Moroff has always had excellent zone judgement, but this year he began to tap into his power.  While his great start relied on him taking a lot more hacks at the ball and he fell behind in counts, his walk rate has begun to recover a bit.  His profile isn’t the best for major league baseball, though, and he’ll need to start hitting soon with the big boys to prove that he belongs.  Otherwise, we can expect to see Max back in Indianapolis soon.

Hanson has sent Pittsburgh looking for answers, as he is out of options and the Pirates must keep him on their 25 man roster in order to hold onto him.  However, he’s been terrible recently with no particular signs of turning it around.  Perhaps he would be better suited on a different team, but for now I strongly advise staying away until he can bump up either the average, the OBP, or the power.

Neverauskas is the best of a moderately-talented bunch of RP at AAA for the Pirates, and he got called up briefly in April as a result.  He still has the ability to strike out double digit batters per 9, and all that he needs is an extended opportunity.  Dovydas isn’t necessarily someone that you should pick up right away, but he could find himself falling into leverage situations with the Buccos if Tony Watson is dealt and Daniel Hudson continues to struggle.

Jose continued his hot spring well into April, as he got called up in the midst of the Starling Marte suspension fiasco and has forced the Pirates to keep him up ever since.  If you keep an eye on him, he could hold some value in daily leagues this year, or in dynasty leagues next year.

He started running and hasn’t looked back.  Tucker has thus far stolen 23 bases in 31 games.  Between that and an improved eye, the Pirates 1st round pick from 2014 is looking much better than he did this time last year.  If Kevin Newman falters at the higher levels of the organization, Tucker could start smelling an opportunity in Pittsburgh.

Escobar has had a terrific start to the season…at least for his first 4 starts.  He is tied for the minor league lead in strikeouts, but he has always had serious problems with his command that have come back to bite him in his two most recent starts.  Keep an eye on him, as he could still resolve those issues quickly.  For now, he’s a paradoxical player that you can sell-high if you own him, and buy-low if you don’t.

Well, I got this one wrong.  I was certain that the Pirates would want to see how their Rule 5 investment in Webb went, but that was for naught as the Pirates offered him back to the Yankees just before the season started.  He’s doing typical Webb things, pitching 19:0 K/BB in 13.1 innings, to go along with a .61 FIP and 4.73 ERA.  If anything, I’d say that this could be a sneaky chance to buy a control reliever in very deep leagues where relievers that don’t rack up holds actually matter.

Duncan was traded to Arizona near the beginning of the season in exchange for the marginal bench player Phil Gosselin.  He’s off to a somewhat slow start on their AAA team, sporting a 7.22 ERA and only 23 strikeouts in 33.2 innings.  For now, he’s not a likely candidate to fill the existing hole in the ‘Zona rotation. 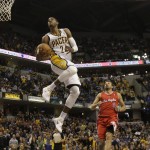