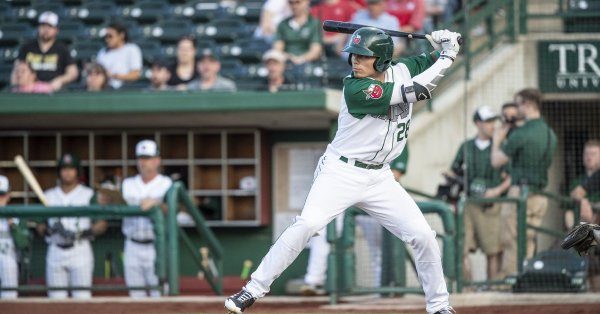 Standing 6 feet, 4 inches tall and weighing in at 215 pounds, Tirso Ornelas doesn’t exactly meet the specifications of a typical 18-year-old. With one look at the Padres prospect in action, it’s easy to recognize that there is nothing typical about his game. Ornelas, along with TinCaps teammates Justin Lopez and Gabriel Arias make up the Midwest League’s youngest trio of players. But don’t let the age fool you, Ornelas is equipped with an advanced bat and a swing from the left side of the plate that has evaluators eager for the future.

Count San Diego Padres manager Andy Green as one of the many baseball minds Ornelas has impressed in his short time in professional baseball. “In my estimation, (Ornelas) is one of our top outfield prospects,” Green told FriarWire. “He’s got power, but he also has plate discipline. He walked at a 17 percent clip in the minor leagues last year in his first year of (pro) baseball.” Despite being the second youngest player in the Midwest League,Ornelas has produced solid numbers and put on impressive power displays in batting practice since his arrival in Fort Wayne. Scouts began taking notice of his unique blend of power and athleticism last season in rookie ball where he produced an impressive .804 OPS across 238 plate appearances.

Through 53 games in Low-A this season, the Tijuana native has slugged five home runs and collected 17 extra-base hits along the way. Ornelas has been red-hot over the last 30 games slashing .294/.390/.529 while striking out just 16 times in just under 100 at-bats. Opposing pitchers have noticed his refined, yet aggressive approach as they’ve begun to pitch the young slugger away during his plate appearances since he’s proven to be able to cover middle in with ease. TinCaps manager Anthony Contreras has emphasized “not missing your pitch when you get it” and being ready to “handle the fastball early in the count”, advice that has improved Ornelas’ plate discipline during his recent hot-streak.

Tirso Ornelas battles back from an 0-2 count to collect the TinCaps first hit. pic.twitter.com/QyIwtaG3lK

What began as a relatively anonymous journey through the Padres system has now found him ranked as the organization’s 11th best prospect according to Fangraphs.  “Ornelas doesn’t project to have elite raw power, but he’ll get to whatever power he does have because of how often he squares the ball up, and he should do enough damage to profile in (left field or right field),” Fangraphs prospect expert Eric Longenhagen wrote. “He’s more likely to succeed than any of the other Padres prospects at Fort Wayne because he’s the most advanced hitter.” At just 18 years-old, Ornelas has plenty of time to ready his game for the major leagues and with the depth of San Diego’s system, their more than willing to let him spend more time at a lower level developing than most clubs have the luxury of doing. In any case, the Padres are aware that this is a long-term investment that could pay major dividends in 2021 or 2022.

Ryan Noda, 1B, Blue Jays (Lansing): Noda has been the hottest hitter in the Midwest League over the past seven days producing a ridiculous .500/.600/.1583 slash line and blasting four home runs along the way. The 22-year-old first baseman is older than the typical Low-A prospect, but he’s finally tapping into his raw power and he’s also been successful on 8 of his 10 stolen base attempts this season.

Esteury Ruiz, 2B, Padres (Fort Wayne): Part of the deep and young San Diego system, Ruiz is tied for 3rd in the Midwest League with 19 steals through 50 games.  Ruiz is a major talent, but receives very little attention when discussing the Padres‘ system and there’s much more to his game than just speed. Ruiz has produced five home runs thus far in 2018 and leads the team in RBI with 30. If he can add strength to his 6-0/160 lbs frame he’ll offer 25 HR potential at the major league level.

Ronaldo Hernandez, C, Rays (Bowling Green): The 20-year-old top catching prospect is hitting .309/.356/.519 over 49 games this season, while continuing to improve his already high-quality defense behind the plate. What’s even more impressive about his hitting profile is respectable 16.3 strikeout rate he’s maintained through 202 plate appearances. His approach is advanced for Low-A, but the Rays are slow to promote their players, so it’s conceivable that Hernandez might see an entire year of Midwest League pitching before a promotion is considered.

Alex Kirilloff, OF, Twins (Cedar Rapids): The 2016 first-round pick blasted his 11th home run of the season last week and is hitting a stout .321/.383/.584 on the year. After missing the entire 2017 season following Tommy John surgery, the 20-year-old has lived up to the hype in his first taste of full-season ball and has established himself as one of the top outfield prospects in the minor leagues. Kirilloff is the proud owner of 1.027 OPS over his last 14 games and a mid-season promotion to the Florida State League seems to be coming shortly.

Paul Balestrieri, P, Cardinals (Peoria): The West Windsor, New Jersey native spun a no-hitter Friday night, tossing 100 pitches – 65 of which were strikes to lead Peoria past Kane County. After the first Kane County hitter reached on an error, Balestrieri retired 25 straight cougars – 14 coming courtesy of ground outs to secure the 10th no-hitter in Peoria Chiefs history. The 26th-round pick out of Cornell is currently being stretched out in the MWL in hopes that he can be featured as a starting pitcher as he moves through the St. Louis system.

MacKenzie Gore, P, Padres (Fort Wayne): After dealing with a blister issue on his throwing hand the past three weeks, Gore made his return to the mound Sunday turning in an impressive, albeit short performance. The 3rd overall pick from 2017 tossed two innings of shutout ball, striking out three while issuing just one free pass. Gore was impressive in his first inning of work, striking out the side and locating his fastball with ease. He mostly sat 92-93 mph, but did run a couple of fastballs that hit 95 on the radar. Gore is widely considered the best left-handed pitching prospect in all of minor league baseball.

Hunter Greene, P, Reds (Dayton): Through 11 starts Greene’s numbers are a bit unsightly: 1-4, 5.70 ERA & 1.66 WHIP, not to mention his 4.24 BB/9. No worries sports fans. As always, it’s important to remember that age-to-level is paramount when assessing minor league talent. Greene is just 18-years-old and more importantly, his velocity is right where the Reds want it to be. He registered 101 mph eight times in his start Saturday night, racking up 6 Ks in five innings of work. His 12.47 K/9 ranks 2nd in the MWL for pitchers with a minimum of 30 innings  and hasn’t allowed more than one earned run in 5 of his last six outings.

Stuart Fairchild, OF, Reds (Dayton): The 38th overall pick of the 2017 draft is hitting a respectable .282/.380/.464, but his swing and miss tendencies thus far have considerably slowed his progress in Low-A. He’s struck out 60 times in 245 plate appearances this season, not awful (24.5%), but certainly not trending in the direction that he and the Reds would like it to be. Nonetheless, Fairchild will move through the system due to his strong arm and glove-first reputation in center field and his above-average speed as he’s swiped 15 bases in 19 attempts this season.

Miguel Amaya, C, Cubs (South Bend): If you’re not familiar with the 19-year-old catcher from Panama, brush up quickly, because he’s beginning to settle in at the plate and the numbers will back that up. Amaya has totaled 8 home runs so far in 2018 and he’s put together a nice little .871 OPS to prove how comfortable he’s become offensively. Over his last 14 games, Amaya’s hitting .342 with 4 home runs and 12 RBI, but this isn’t a temporary power surge as he’s produced a .217 ISO across 52 games this year. His defense needs some work as he’s struggled to throw out base runners with any consistency, but the Cubs have also mixed in some reps at first base which tells us they believe his bat will play at advanced levels.

Ibandel Isabel, 1B, Reds (Dayton): Acquired from the Dodgers in a trade this spring, the 6-4/225 lbs first baseman has elite power and quick hands as demonstrated by his .368 ISO and .425 wOBA  over the last 39 games. Defense remains an issue and he struggles with contact as he owns a 33.5% strikeout rate, but considering his physical attributes, he’ll be given every opportunity to prove he can be an everyday contributor.

Patrick Sandoval, P, Astros (Quad Cities): Houston selected Sandoval in the 11th round of the 2015 draft and thought so highly of the tall, muscular lefty they signed him to an over-slot deal worth $900,000. His development has been delayed a bit by a lack of control, but he seems to be finding his rhythm as of late. Sandoval has found success commanding his low 90’s fastball and parlayed that into 1.64 ERA over his last five starts (22 IP). He’s also racked up 23 Ks against just 4 walks over that same period. His secondary offerings, especially his curveball are making significant strides from even a year ago, but there’s still some work to do before Houston feels comfortable moving him out of Low-A.

About Kurt Fremion 9 Articles
I call Fort Wayne, Indiana home and spend more time than I'd like to admit cheering on the TinCaps every summer at Parkview Field. I'm infatuated with all things baseball and am currently on a quest with my family to attend a game at all 30 MLB ballparks within the next few years. Wish me luck. I'm a bit too analytical at times, in fact, you could say I have a rather unhealthy relationship with wOBA, which makes wRC+ insanely jealous. I'll be covering the Midwest League for Prospects1500.