The Blue Rocks are the High-A affiliate of the Washington Nationals. They play at Daniel J. Frawley Stadium on Judy Johnson Field. The stadium is named after the Mayor who implemented the return of the team back in 1993 and Judy Johnson was a local Negro league star. The team is named for the blue granite rocks that are found on the shore of the nearby Brandywine River. 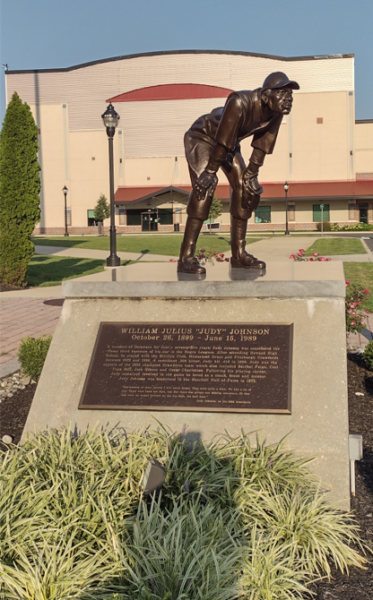 A few notable players on the Blue Rocks roster include Yasel Antuna, Drew Mendoza, Israel Pineda and Joan Adon. Some players who were on the team earlier in the year include Cade Cavalli, Jackson Rutledge and Gage Canning.

Their opponent for the evening was the Jersey Shore BlueClaws, coincidentally a Phillies affiliate, so I was familiar with most of the names on the roster such as Ethan Lindow, Erik Miller, Dominic Pipkin, Logan O’Hoppe, Carlos De La Cruz, and Adam Haseley.

Both teams came into the game having underwhelming records with Wilmington at 43-52 and Jersey Shore at 41-52. However, minor league baseball isn’t always about stats and records. Developing players is the priority for the major league organization in most cases.

Let’s get into how my time was At The Ballpark: 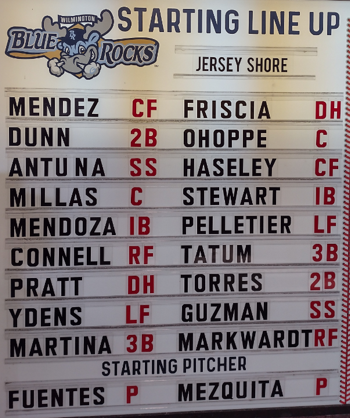 The park is 45 minutes south of Philadelphia via I-95 South and is located about two miles off the exit. Parking was free which was a pleasant surprise. There were plenty of parking spots in two big lots adjacent to the stadium.

Prior to arriving at the park, I dined at Del Pez, a Mexican Restaurant two blocks from the stadium and enjoyed it very much. The staff was very nice and were happy to hear we came from Philadelphia to visit the area. The food was very good, especially the nachos and shrimp tacos. I highly recommend it if you’re in the area. There are many dining options to choose from if you want to eat before the game and a quick search will show them.

Going to a ballgame isn’t complete without eating the food at the park, so I made sure I saved room for what they had to offer. There are three food options here – Chickie’s and Pete’s, The Greene Turtle and Grotto Pizza. Since I’ve had Chickie’s and Pete’s many times, I wanted to try something different – the Funnel Cake Fries from the Greene Turtle. They’re a variation on funnel cake made in the shape of fries and they were delicious. The hot dog wasn’t bad either. I’ve had better but had worse too. There were other standard options such as hamburgers, pizza and sausages which I’ll try at future games.

The team store is aptly named The Quarry and had many shirts and hats to choose from. There were also baseball cards, cups, glasses and other normal merchandise you would find in any team store. The one employee in there told me she’s been working there for years and loves seeing all the friendly faces each game.

There were five promotions going on that evening:

1 – Wizardry Night – I had no idea what this would entail but the website assured its readers that the team was up to no good that night and offered an exclusive gift with ticket purchase. Upon arriving at the park, the giveaways were a scarf that was made in the Harry Potter colors along with a cup of “Butterbeer” which was actually cream soda. I suppose the team couldn’t use the Harry Potter name so they named it as they did.

2 – Tito’s Tuesday – Discounted prices on Tito’s Vodka drink for fans over the age of 21.

4 – Bark In The Park – Fans could bring their canine friends into the park to enjoy baseball with them.

5 – Job Fair – Representatives from about 10 local businesses were at tables handing out giveaways and discussing job opportunities with seekers. The cool part of this was that if you brought a resume to the park, you received a free ticket to the game.

The team has three mascots to entertain fans during games – Rocky Bluewinkle is a blue moose, Mr. Celery is a stalk of celery and Rubble is a blue rock. Rubble was nowhere to be found during my visit but Rocky was all over the place, providing high-fives and taking pictures with anyone who asked. Mr. Celery is a rather interesting creature. He lives inside the stadium and comes out from the left-field gate whenever the Blue Rocks score a run. He does a quick dance to Blur’s Song 2 (Woo-Hoo song) then retreats back to his secluded hiding place. I asked a few of the workers what the celery’s significance to Blue Rocks is but nobody seemed to know. If anyone knows the connection between the two, please let me know because I’m stumped.

There were three between-innings games to pass the time – kids racing a stuffed horse, kids putting a golf ball and kids racing to gather items to fill up a bucket. Pretty similar to what you see at most minor league parks. 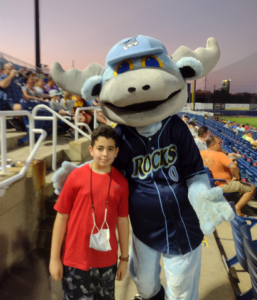 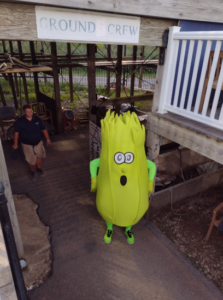 The BlueClaws won the game 9-8 in 13 innings on a sacrifice bunt by Nicolas Torres and a throwing error by Blue Rock pitcher Davis Moore. Both teams scored a run each in the 10th and 12th innings but Jersey Shore held the Wilmington scoreless in the bottom of the 13th to get Ben Brown the win.

A few interesting observations I saw:

Some quick thoughts on a few players:

Logan O’Hoppe:  It’s been said that O’Hoppe has great intangibles and they were on display tonight. On groundballs to shortstop and third base in his first two at-bats, he hustled down the line both times.  I noticed him a few times motioning to the pitcher to calm down or keep the ball low and another time pumping his fist after the pitcher struck out a batter. Coincidentally, O’Hoppe was promoted to AA the next day and we wish him great success for the Reading Fightin Phils!

D.J. Stewart: Stewart hit a monster shot out of the stadium in his first at-bat. He then hit another ball to the warning track. He’s having his best season this year numbers-wise.

Jhordany Mezquita: Mezquita didn’t look bad his first inning but the second inning did him in. He gave up 6 runs on 4 singles and 2 doubles that inning.

Jonathan Guzman: Guzman looked pretty smooth defensively turning double plays with ease and having an accurate arm on plays at first base.

Yasel Antuna: The ball sounds different coming off Antuna’s bat. He smoked two sharp singles during the game and made some good plays in the field, too.

Ben Pelletier: In his debut game for the BlueClaws, he hit a home run and made a great catch in the outfield, too. He’s someone I will be keeping my eye on going forward.

Overall, it was a fun night at the park. The weather was nice, the food was great and the game had an exciting ending.  This sentence my son said to me sums up the experience well. “Everyone here was so nice and it was so much fun.”