As a little kid, I never imagined in a hundred years that I would be able to walk on to the field of a professional baseball team with some of the most talented players in the world around me. Well, that’s why we keep working! On Saturday, July 16th I was lucky enough to be issued a media credential, thanks to Scott Greene and Prospects1500. It was legitimately one of the coolest experiences I have ever had in baseball in my life. I want to thank Scott for giving me this opportunity and I wanted to share my experiences from that day, along with some interesting tidbits of information I was able to acquire.

I arrived at Dodger Stadium several hours before the game with my partner in crime for the day, Gail Verderico (@1baseball_gail). We took in the press box for a little bit before being allowed in to roam about the Dodger’s clubhouse. I knew we would be granted access, but I didn’t anticipate how easy it was to talk to players and how welcoming they were. I took in the experience at first by just watching some of the guys and how they were acting. Mets’ catching prospect Francisco Alvarez was a riot! He was joking along with everyone, had a huge smile on his face and had an absolute monster gold chain around his massive neck. He has so much charisma and always seemed to find his way to cameras by flexing his muscles or showing off his cleats or bat.

Pete Crow-Armstrong was busy chatting with guys around him and seemed to just observe as many of his peers as he could. Jasson Dominguez looks like he’s ready to fight anyone that might want to, as his confidence is overwhelming. He definitely thinks he owns the room. I got to talk to Padres elite prospect Robert Hassell III and let him know that if CJ Abrams would just hurry up and graduate from his prospect status he would be new number 1 in the San Diego farm system. I don’t think he really knew what I was talking about but he was all business and had a good Futures Game later that afternoon. 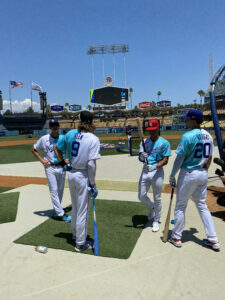 The three Brewers prospects were grouped together in the clubhouse and they are all so different. Antoine Kelly was reserved and low key while Joey Wiemer was walking around, talking to anyone that would listen. And of course you had the phenom, Jackson Chourio, in the middle just soaking it all in. You could tell he was so glad to be here and it was quite impressive to see him be invited. As we moved around the clubhouse, some of the guys really stood out from a physicality point. Eury Perez is a giant human. Elly De La Cruz isn’t much smaller. Jordan Walker has some grown-man strength and he can’t even order a beer yet. Logan O’Hoppe has arms that look like they could murder baseballs (he also was a guy that hustled everywhere! A true catcher, through and through) Gail and I then moved to Jordan Lawlar who was super genuine and talked to us for a good 5 minutes. He has superstar personality written all over him and the sky is the limit for him. He’s also 100% recovered from injury, and let’s not forget how special it is for someone who was just drafted the year prior to be invited. 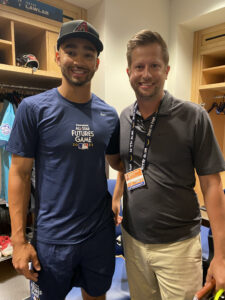 Gail said hello to her Dodger prospects, Bobby Miller, Miguel Vargas, and Diego Cartaya. They were glad to see her and it was a very heartfelt greeting. Miller in particular was fascinating, as I watched him getting ready for a seemingly huge start in his future ballpark. You would never guess in a million years that he was starting the game, but the reporters were all over him all day. When he had a few minutes of a reprieve I noticed him taking everything in. You could tell this did mean a lot to him and that he couldn’t wait to get to the show. The Dodgers media team had Vargas do a bit about Randy Newman and even though it was hard for him with the language barrier, he was a great sport about it and delivered the biggest smile of the day when he nailed his lines for the first time. 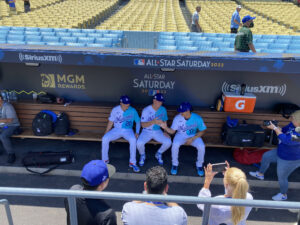 One of the coolest things about the day was watching batting practice. Follow me on Twitter to check out some videos I took, as there are too many great shots to post here alone. De La Cruz, Jhonkensy Noel, Matt Wallner and Oscar Colas were the ones that really made a mark during BP. Noel and Colas showed extreme power, as Noel hit one that almost went out of the stadium and Colas showed easy power to straightaway center. It was also fascinating to see how the players approached their time in the cage. Shea Langeliers was all business, making sure to ask Adrian Beltre what to do in each round and not talking to anyone in between. George Valera was joking particularly hard and was even messing with the pitcher during BP when he didn’t get a good pitch to hit. Zac Veen, taller than I would have guessed, was very content to just be off by himself and enjoy every moment. Anthony Volpe took some time to meet up with Beltre in between swings, although a terrible part of me thinks if was for the photo op (it worked as I quickly snapped a picture). 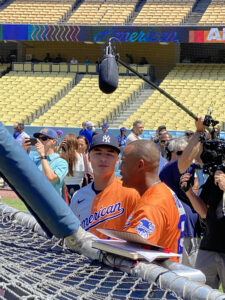 Of course, it was just one day. Of course, it was just batting practice. But once you see guys up close like this and how they handle the big stage, you can still learn a lot about these guys. The future is going to be very bright in MLB (if only they would not schedule the game in the middle of a full MLB schedule of games) and I can’t wait to see which ones of these players will make it big. Odds are, one or two of these guys will become the next Trout or Tatis, and if we’re lucky maybe even a few more.
Here are a few videos I captured for the day. Please follow me on Twitter (@Alex_W_Sanchez) to see more, as I will be releasing more and more each day!

I’ve learned a lot so far today. But the thing I have learned most is that Elly De La Cruz needs to be a top 10 prospect. Right now. pic.twitter.com/gmTVS1YDOI

Jhonkensy Noel has power. That’s it. End of sentence. pic.twitter.com/YwSwhPysSF

Most surprising guy so far? @Twins Matt Wallner. Barely swinging and hitting everything out, Oppo and pull-side. Impressive. pic.twitter.com/mdeD9khoZk

My goal is to provide an unique perspective when it comes to baseball so that readers can have the information and insight, as well as a bold and progressive analysis. I trust the analytics, but I also trust my eyes when I see the player perform on the field. I don’t want to regurgitate the same, old information but rather I want to give my opinion that is based on research and well-developed thought. Baseball is a game on intricacies and delicate balances and I want to explore every facet that I can. Here on Prospects1500 I will give you the inside scoop on the prospects so that you get to know who they are before everyone else. I won’t always be right, but I can promise my logic and dedication will be sound. Feel free to reach out to discuss and debate and let’s get to prospecting!