For those of us who spend a lot time following prospects, this game should be called the Fall Classic. The Arizona Fall League is designed for the top prospects in the game and the Fall Stars Game showcases the best of the best. The future stars of the game are seen here.

On a fairly warm fall Arizona evening, all the stars were out, in good spirits and having a great time. The game started out pretty routine, but then it quickly turned into a MLB All-Star game from years past. Pretty much every player got into the game. The East used everyone except Nolan Jones (CLE – INF) and the West used everyone except for pitcher Elliot Ashbeck (SD). Pitchers were brought in to face one batter. While it was a challenge to keep score, I’m happy that (almost) all the players got a chance to play.

Great night at @SaltRiverFields for the @MLBazFallLeague Fall Stars game. Both teams are loaded with talented and future @mlb players! @MiLB #FPAZ19 pic.twitter.com/cUTUJNwSUP

Royce Lewis (MIN) from the East, got the scoring started with a 2-run HR in the second inning. The West didn’t wait long to respond, getting a monster solo shot from Kyle Isbel (KC) in the top of the 3rd. They then tied it at 2-2 in the top of the 4th with a 410+ foot shot from Tyler Stephenson (CIN) to the deepest part of the ballpark.

The East then scored two more runs in the bottom of the 4th. Alec Bohm (PHI), who reached on single, scored on a double by Josh Lowe (TB). Lowe then scored on a sac fly from Brandon Marsh (LAA) to go up 4-2.

The rest of the game would be a pitching duel as there was no scoring after the 4th inning. Most impressive was Shane Baz (TB) who hit 100 mph on the radar gun multiple times. Overall, there were 22 strikeouts in this game; 11 on each side.

The game would end with the East winning 4-2 and Royce Lewis was named the MVP.

After the game it dawned on me that there was no Home Run Derby. I don’t know why they don’t have one, but wouldn’t it be great to see Jo Adell and Julio Rodriguez square off in a showcase of power?

Both these guys were quiet during the game, but their bats were loud during BP. Both put on a show and I was in awe of both. I can’t wait to see what they do in the years to come!

Here’s the complete 2019 Arizona Fall League Fall Stars Game boxscore. Find your favorite prospects who played in the game and see how they did. 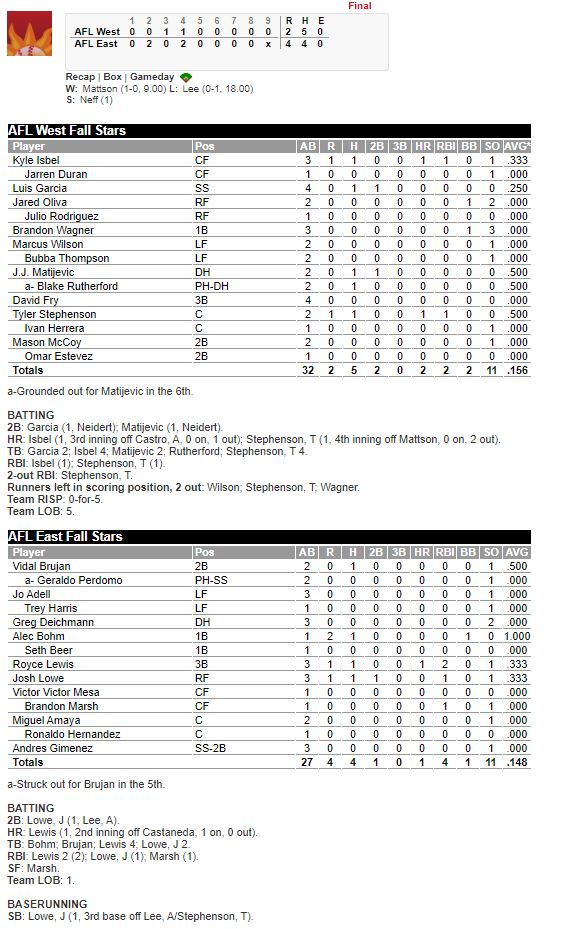 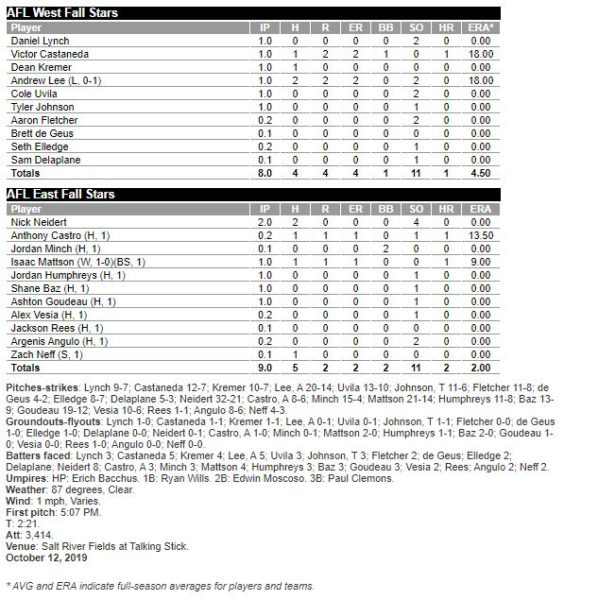