My name is Daniel Preciado and I am very excited to come aboard here at Prospects1500! I will be covering the system of the Los Angeles Dodgers. I am from the Los Angeles area, but I currently reside in Syracuse, NY where I attend Syracuse University. I am currently a sophomore majoring in sport analytics – the only program of its nature in the world – while minoring in both economics and cognitive science.

Growing up in the L.A. area, it was not hard to root for the hometown team. My dad grew up a huge fan of the team in their peak during the 1980s and spread his love to me. The primary reason I have decided to come aboard with Prospects1500 is obviously because of my love of prospects. I have been obsessed with prospecting since I was about eight years old, constantly checking out MLB Pipeline and Baseball America. Yes, I said eight years old! I am still convinced that Mike Olt, Hak-Ju Lee, and Danny Hultzen will pan out.

Now, currently residing in Syracuse, I attend many Syracuse Mets games and will continue to do so. I have seen Victor Robles and Vladimir Guerrero Jr. play against each other there from back when the team was the Syracuse Chiefs. I also grew up going to Rancho Cucamonga Quakes games, the Class-A affiliate of the Dodgers. I had the privilege to see and meet Corey Seager, Julio Urias, and Cody Bellinger as teenagers.

Outside of Prospects1500, I also write for Dodgers Nation, the biggest news site for the Dodgers. I am also very involved in the fantasy baseball community. I have participated in The Great Fantasy Baseball Invitational and play in a half dozen dynasty leagues. If you’re ever looking for a new person for a league, keep me in mind!

You can follow me on Twitter at @DanJPreciado where 95% of my tweets relate to the Dodgers and issues around Major League Baseball and 5% are random. If you have any questions about the Dodgers’ minor league system or regarding fantasy baseball, my DMs are always open to discuss. 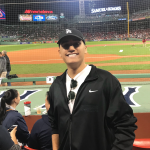