With the absence of baseball or any sports in the world, we’re going to swerve slightly away from prospecting in this article while staying with the baseball theme and give our first ever book review here on the site.

The Wax Pack: On the Open Road in Search of Baseball’s Afterlife is a book that came out on April 1st, 2020 and the premise is pretty amazing. Brad Balukijan opens a pack of 1986 Topps Baseball cards 29 years later and goes on a mission to meet every player whose card was in the pack. He traveled over 11,000 miles during the summer of 2015 and tells about his adventures while also thinking about his own life. This review will not have any spoilers so if you’re thinking about purchasing the book, you don’t have to worry about me ruining it for you.

Before we dive into it, I’d like to answer a question many of you may have – what about the gum in the pack? Well the author did taste the gum and it was just as interesting as 30-year-old gum could be. It actually dissolved into little pieces in his mouth and was “delightfully gross.” If I close my eyes and think about opening a pack of cards during the summer of 1986, my first memory would be the smell of that joyous gum combined with the fresh cardboard praying for a Mike Schmidt or Don Mattingly card.

In the first and last chapters, Balukijan discusses how the cards are made with people who worked at the now-defunct Topps Factory in Duryea, Pennsylvania. It was pretty neat to hear the former workers talk about how they enjoyed their time there and how much the place meant to them.

Each chapter of the rest of the book is dedicated to one player that he aims to meet on his journey:

Throughout the book, we are introduced to and learn about most of the players Balukijan met during his journey. I say most, rather than all, because he didn’t get to meet with three of the players. Well, one of them did agree to meet him but he blew him off for reasons you’ll learn about in the book. Another player said he would meet him but plans changed at the last minute and another one is deceased. The funniest part of the book is how Balukijan went about trying to meet with one of these players at a convention during Hall of Fame Weekend when all other attempts were rebuffed.

A great thing about the book is getting to know these baseball players and how they are more than heroes on a baseball card but human beings, like us, with personal issues they went through. Most of the players were down to earth and discussed their life after baseball and any difficulties they had in adjusting to their post-playing days. Brad interweaves his own stories and we learn more about his past and how he coped with his own struggles. I went into the book anticipating more stories from the players about their playing days but there were very few mentions of that time in their lives. Rather, they talked to Balukijan more about their current lives and, at times, it seemed as if I were reading a story about friends catching up on past times.

I felt a lot of emotions reading this book. I laughed at the part mentioned earlier at the card convention. One player discussed his wife’s battle with cancer which hit home and another player talked about his anger at his manager for not backing him up during his time with the team. Another player went to the zoo with Balukijan while another one watched Kung Fu Theater with him. Balukijan even got to take batting practice with another player.

The best part about the book is that you don’t have to be a card collector or even a baseball fan to enjoy the story. Holistically speaking, the story talks about evolving and adapting to change in the world. The backdrop of baseball and card collecting is a bonus to fans. And that book cover is, arguably, the nicest one I’ve seen in a long time. 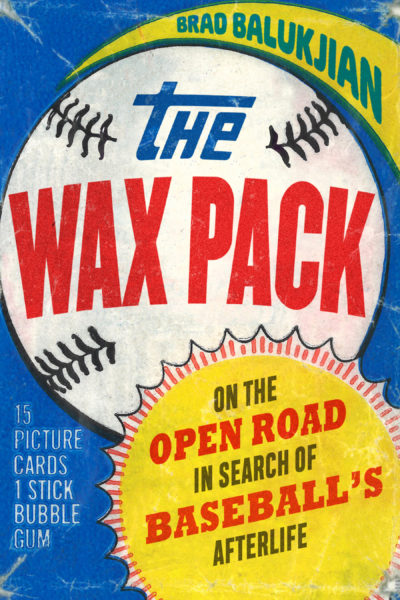 Overall, I give The Wax Pack a 70 grade on the 20-80 scouting scale. You can pick up your own copy of The Wax Pack wherever you purchase or download books. I definitely recommend it. If you’re going to get your own copy, the author suggests using Bookshop, which is helping indie stores stay afloat during these tough times.

If you are planning on ordering The Wax Pack, please consider going through Bookshop, which is helping indie stores stay afloat in these tough times: https://t.co/sR8UFBgRiP

PROLOGUE:
Our site leader Scott Greene was lucky to win the book on Twitter and Brad even personalized the copy for him. So cool! Thanks a lot Brad! 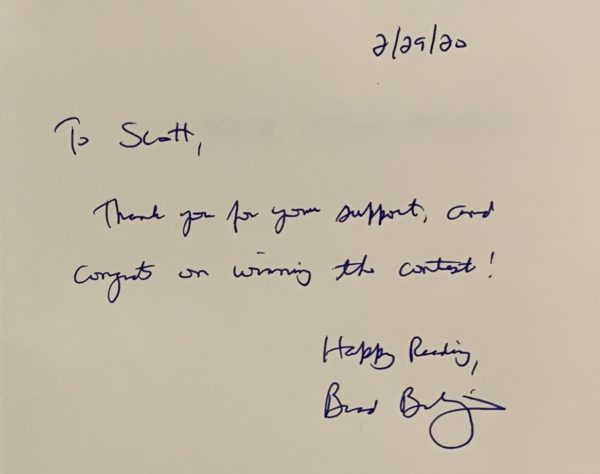