This past weekend is the World Series/Super Bowl for any prospects enthusiast. That’s not an overstatement. I had the opportunity to attend the 2015 Futures Game in Cincinnati and quickly realized that showcase for the game’s best up-and-coming talent is an event any Minor League Baseball fan should try to attend. Now having had a few days to digest the Miami 2017 experience (always loved that Billy Joel song!) it’s time for my Futures Game, and All Star Weekend, recap.

I was very lucky to be in Miami this year for the Futures Game, able to cover the game for Prospects1500 and get up close with players thanks to MLB. Over the weekend I was also able to check out the annual All Star FanFest at the Miami Beach Convention Center which is a spectacle itself. If you’re familiar with WWE Wrestlemania Axxess, FanFest is about 5 times larger, and Axxess is big! Play Ball Park in Bayfront Park also made my agenda (with a little stickball action), as did the MLB Network Radio live round table broadcast from the Yard House on Saturday afternoon, but the Futures Game was my main event. With family and other responsibilities calling at home, Monday’s HR Derby and Tuesday’s All Star Game wouldn’t even be in the cards as I flew back home Monday morning.

Quick recap of FanFest and MLB Network Radio’s round table:
Not really sure where to start with FanFest. Q&A’s from so many different players, mostly Legends/Hall of Famers, as well as unbelievably long lines for autographs from many of these stars. The FanFest store has basically anything you’d want for All Star Game apparel EXCEPT there was zero Futures Game apparel. Nada. If you wanted anything Futures Game the only place for that was the Team Store at Marlins Park on Sunday and they did have some USA and World team Futures Game caps. That’s all. Of course I had to get one of those! My favorite part of FanFest is getting your own Topps baseball card. You can pick whichever team you want, they give you a jersey to put on, take your picture, and then they add your name to the 2017 Topps baseball design and print out your card. It’s awesome! Nathan’s had a fun Hot Dog Eating Exhibition with Joey Chestnut and other big time competitive eaters. There’s so much to take in at FanFest and for $20 ($5 of which MLB donates to Autism Speaks) it’s a must-attend event for anyone going to an All Star Game city.

MLB Network Radio broadcasted live from the Miami Beach Yard House on Saturday afternoon. This was an opportunity to meet the on-air talent, several of whom are former players or general managers, and also get on-the-air live with questions to the panel. The first hour was hosted by Mike Ferrin and Grant Paulsen. If you haven’t tuned in to Paulsen’s Minors & Majors on Sunday morning from 8-10am EST on MLB Network Radio, you need to check that out. Jim Bowden and Jim Duquette sat in during the second hour, and then Steve Phillips and Eduardo Perez hosted the final hour. All of them were very gracious and open to saying hello and answering questions. If you’re in Washington DC next July and they do another “State of the Game” round table, don’t miss it.  By the way, Bowden read me a text from Dave Dombrowski on the air which said Devers won’t see MLB time earlier than “next season.” 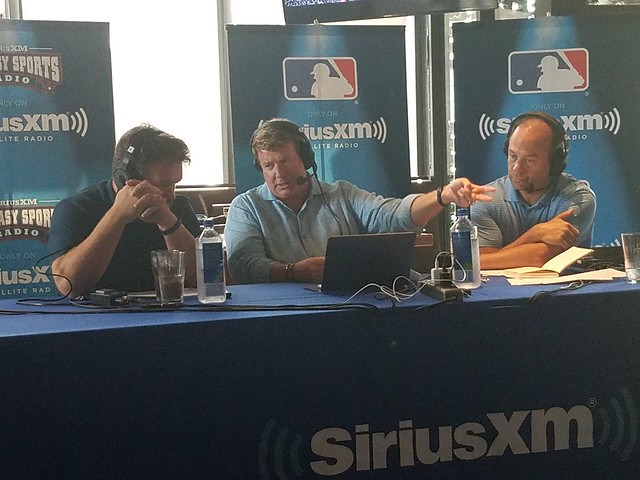 Futures Game, Marlins Park – Sunday, July 9, 2017
Having asked Grant Paulsen what he recommended I do attending my first Futures Game, his biggest pointer was to be down on the field during batting practice. Taking that advice it was definitely the best part of the whole event. Being able to see the big name stars of tomorrow up close during their BP, say hello to and chat with others in the industry, and share the experience with our followers on social media, it was such an honor for me. Quick thanks to J.J. Cooper & Josh Norris from Baseball America, Paul Pagnato from Pinstriped Prospects, Heidi Watney from MLB Network, and Brent Hershey and Chis Blessing from USA Today for each taking a few moments to chat. USA defeated World 7-6 but that doesn’t tell the story. USA built an early 7-0 lead and the World battled back and had tying run on base but could not complete the full comeback. Now let’s get to the game highlights.

Brewers Corey Ray had one of the most impressive batting practice sessions. There’s some real power there folks! 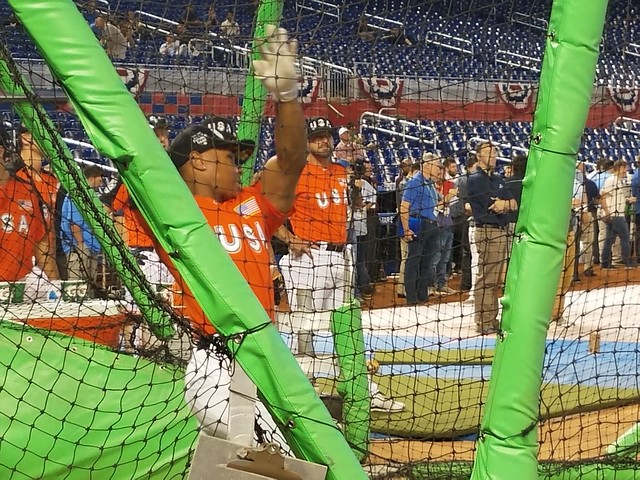 Rays Brent Honeywell took home the game’s MVP honors by hurling the first 2 innings, giving up only 1 hit while striking out 4. Honeywell pulled out his screwball one time and used it to strikeout Dodgers prospect Alex Verdugo.

Some of the biggest hitting World prospects in the game almost looked silly striking out against the likes of Honeywell, Michael Kopech, Beau Burrows and Tanner Scott. Stars such as Eloy Jimenez (just traded to White Sox today in the Jose Quintana deal), Vladimir Guerrero, Jr, Ronald Acuna, Amed Rosario, Rafael Devers and even Yoan Moncada all struck out, some even more than once, against these dominant USA pitchers. One of my favorite photos from all weekend includes three of these prospects – Boston’s Devers, Toronto’s Guerrero and Chicago’s (now AL) Jimenez. 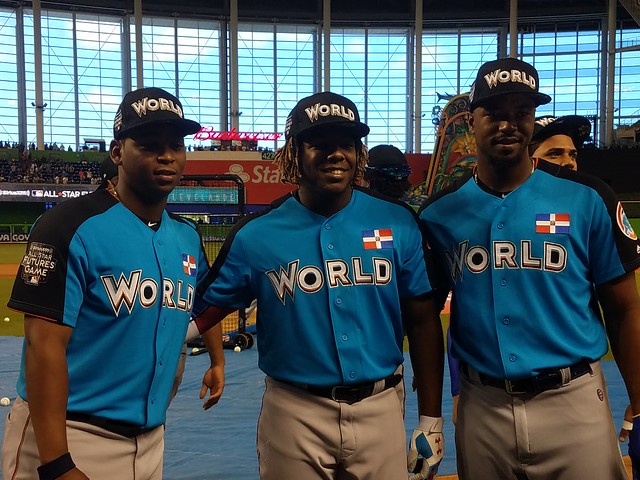 Also, both Kopech and Mariners Thyago Vieira each topped 100 MPH in their Futures Game stints. One of the big highlights of the game saw Kopech blow White Sox teammate Moncada away with three straight fastballs of 99, 100, and 101 MPH respectively.

No doubt the defensive play of the game came in the 9th inning when Rockies 1B Ryan McMahon stretched himself out over the World dugout railing and retired Guerrero, Jr. in the middle of a rally. Guerrero, one of the top prospects in all of baseball, did have 2 hits and scored 2 runs in the game. My pick for a close second defensive play would be Rockies Brendan Rodgers snagging a Josh Naylor smash to second in the 3rd inning, displaying some very fancy leather work in the middle infield.

Astros OF Derek Fisher had a very nice showing, going 1-2 with a run, 2 RBI and stole third. South Florida native Brewers Lewis Brinson also had a stolen base. Those were the only 2 SBs in the contest.

The unfortunate worst pitching line of the day went to Yankees Domingo Acevedo. He had a tough time in the 4th inning, giving up 4 hits, 3 runs with 1 K.

Orioles C Chance Sisco crushed a ball to the gap for a triple in this year’s game, following up a HR in the 2016 edition. Couple nice showings for Baltimore’s top prospect.

More of my Futures Game and photos from All Star Weekend can be seen in my Flickr album. 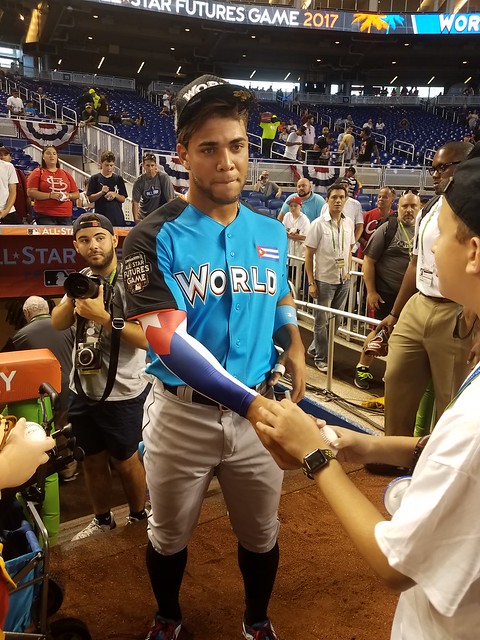