The baseball card collecting hobby has evolved quite a bit over the last several decades. Many of us started collecting in the junk wax era, where overproduction was prevalent. Today, prices and interest in the hobby are at an all-time high. Card companies are not targeting young kids anymore, but focusing on those of us that were collecting in our childhood. Collectors back then are now middle-aged and have more disposable income than they did when they were 12 years old. Getting back into collecting cards brings about a strong nostalgic feeling that takes us back to those days of cheap packs and using cards in our bicycle spokes.

Several writers here at Prospects1500 collect cards. I thought it would be interesting to ask each what their favorite card is in their collection and why. 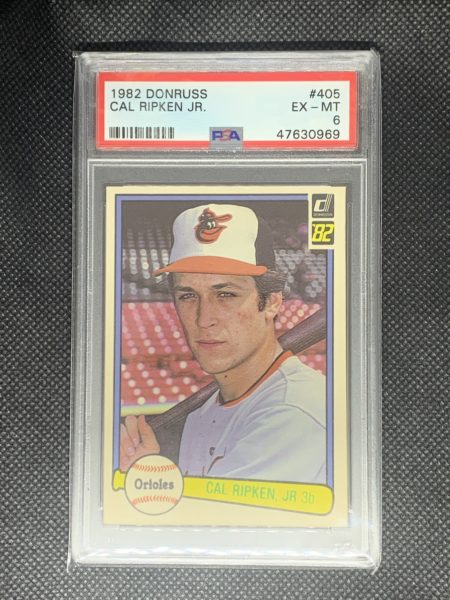 If you grew up in Maryland during the ’80s and ’90s, Ripken was your guy. He was “our” guy. Cal, born and raised in Aberdeen, Maryland, gave all of us kids hope that maybe one day we could play for our hometown team, the Orioles. He represented the blue-collar workers that characterized most of Maryland’s population with his consecutive games played streak. He did things the right way, showed up to work every day and was great at what he did.

I’ve had this card in my possession for well over 30 years and recently sent it for grading to help preserve it. The card is by no means the most valuable, in monetary terms, in my collection. But for a kid from Maryland who had hopes of playing for his beloved Orioles, it will always hold a special place.  — Jacob Swain (@jacob_swain3) 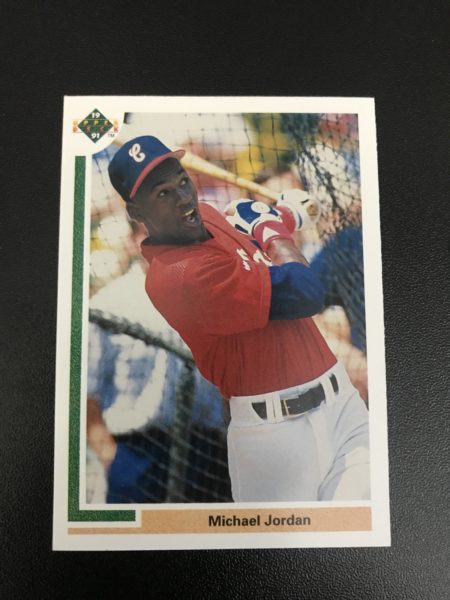 I was 12 years old when I pulled this card, and it’s been my favorite card ever since. On the way home from little league practice, my mother let us stop at our local card shop. It wasn’t even a card shop. It was just a couple of display cases tucked away in the middle of an overcrowded antique mall. I didn’t have much money to spend, and the dealer wasn’t interested in trading for anything I had brought with me, so I settled on a pack of Upper Deck. Michael Jordan was my favorite athlete by far, but I had no clue that he had a baseball card in that set. When I pulled the card, I was dumbfounded, and I showed it to the dealer. He immediately started trying to buy it from me. I ran out of there before he could talk me into it, and I was on cloud nine the rest of the day. Every kid I knew tried to trade for that card, but I never even considered it. To this day, I literally wouldn’t trade this card for a Mike Trout rookie card. The memory of that pull is priceless. — Jared Chapman (@ChappyIsClutch) 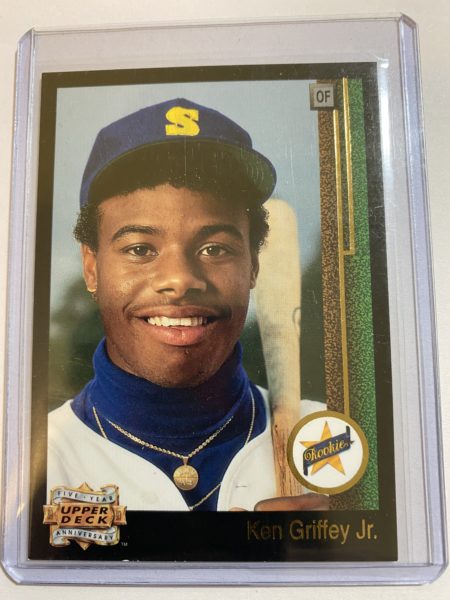 The Ken Griffey Jr. Upper Deck 5 year anniversary insert, numbered A1, is one of my favorite PC Cards. This 15 card set from 1993 Upper Deck highlighted some iconic cards over the five years of Upper Deck. I have some of the iconic 89 Griffey Upper Deck cards, but never was I able to pull one from a pack. However, this card I was able to pull from a pack around 12 years old, and it never left! It’s not a perfect card, and it might not have much monetary value, but it was a fun pull, and everytime I see it, that rush comes back to me. — Stoffer Cochran (@stoffer81) 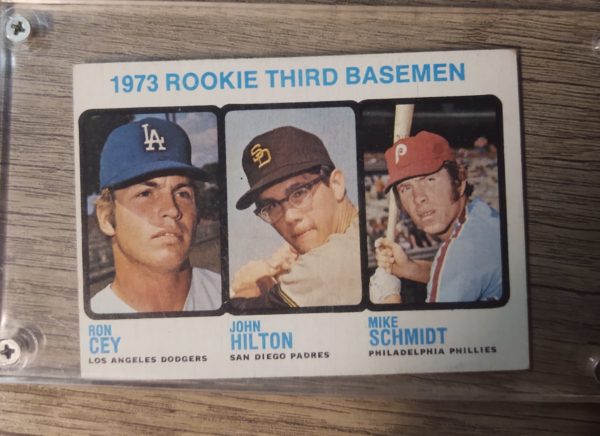 My favorite baseball card is my 1973 Mike Schmidt Rookie card that I purchased back in 1989.  He was always my favorite baseball player, but I was never able to afford his rookie card because it cost a couple of hundred dollars at the time. However, in a stroke of luck, I won money at a Charity Benefit, and the next day went right to the Local Baseball Card shop and sealed the deal.  There are three players on the card – Schmidt, Ron Cey, a mid-level type of player for the Dodgers whose nickname was The Penguin, and John Hilton, who to this day, I still know nothing about.  Either way, the card is still my favorite card in my collection and is in the same case since the day I brought it home. — Tony Bps Spina (@tonybps1) 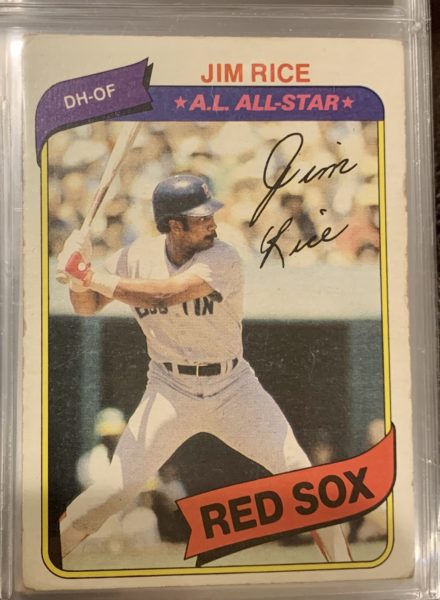 There were no inserts, special autos, or numbered parallels back in 1980. They didn’t even have separate All-Star cards until a few years later. This is just one card from the set, but Rice was my favorite player at the time. He was one of the three AL All-Star outfielders who were all Red Sox that year, Rice, Fred Lynn, and Carl Yastrzemski, and each of their cards in that set had the AL All-Star banner along the top. As a 9-year-old Sox fan at the time, I just loved that! I had collected the 1978 and 1979 sets by buying packs with my Dad during the season. Then I completed those sets by having my Mom take me to a local card store for the last singles I needed. But in 1980, I discovered that you could mail order the complete set, and the whole thing would arrive collated in a box. Wow! Who knew? The hottest card that year was the Rickey Henderson rookie card, and boy did I love that one too – still do! But Rice was my favorite player, and I also believed I had some artistic talent in me. I loved to draw too. This card, to this day, is not in excellent condition because I handled it so much when I was younger. I took it everywhere and tried drawing the same photo whenever I could. It was sort of ingrained in my memory, and at times I would draw the image of that Rice baseball card in my head. I completed some of the sketches, and some are still incomplete, but masterpieces in my mind. 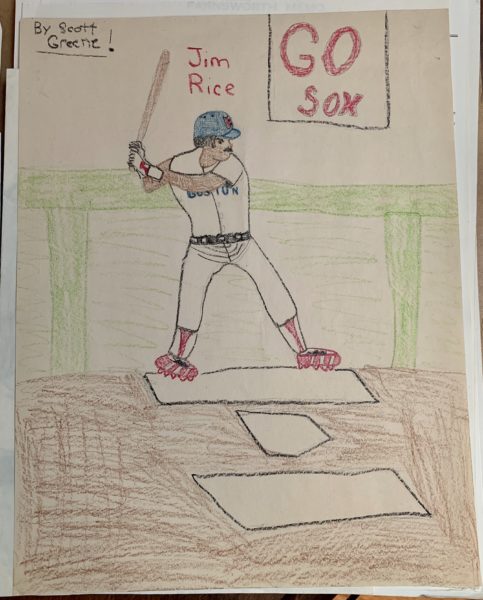 Most of my Jim Rice cards are still in the plastic pages I put them all into back in the mid-1980s. I’ll never part with this 1980 Jim Rice, but I do think I’m going to spend a few bucks to get another one that’s in a bit better condition. — Scott Greene (@Scotty_Ballgame) 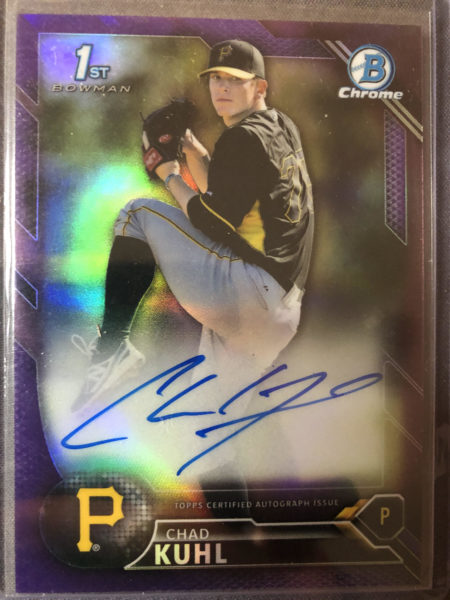 This is not the most valuable card in my collection, but it means a lot to me. I won this card from a Twitter giveaway that was run by @Prospects1500. In fact, that’s how I found the site! This card led me to many friends and interactions with great Twitter folks! I’ll always root for Chad Kuhl thanks to Prospects1500! — Jake Berry (@berrys_baseball) 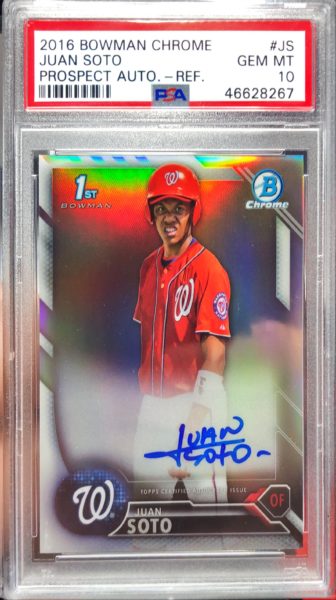 When I first saw Juan in the GCL at the ripe age of 17, I knew he was going to be special. I knew immediately that when he had cards, I just had to acquire as many key ones as I could. I have some great Soto pieces, but this is hands down my favorite. 2016 Bowman Chrome Refractor Auto PSA 10. The card is limited to 499 copies, but just 37 have graded a 10 at PSA due to very condition sensitive back borders and centering issues. I have been a fan of Juan since day one, and I think this card ends up on the level of Mike Trout cards are currently. Juan will be the best hitter of this era. Already proving so. — Bryan Woodward (@CoachBarbaRoja) 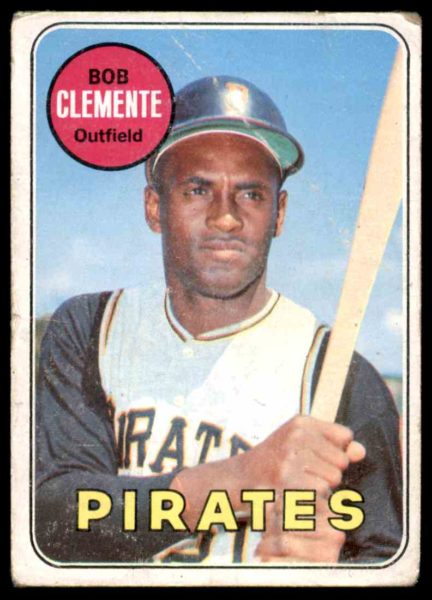 When I was very young, maybe 6 or 7, my dad bought me a book about Roberto Clemente. I already knew who he was, of course. However, I didn’t know the story of his life, and death, until that book. Ever since then, he’s been one of my favorite players of all time.

Several years ago, my best friend bought a “lot” of old cards from someone, and there was a 1969 Topps Bob Clemente, which he gave to me.

It’s not mint condition, and it’s not my most valuable card by far, but it’s my favorite card. — Jarrod Vickery (@jvickery55) 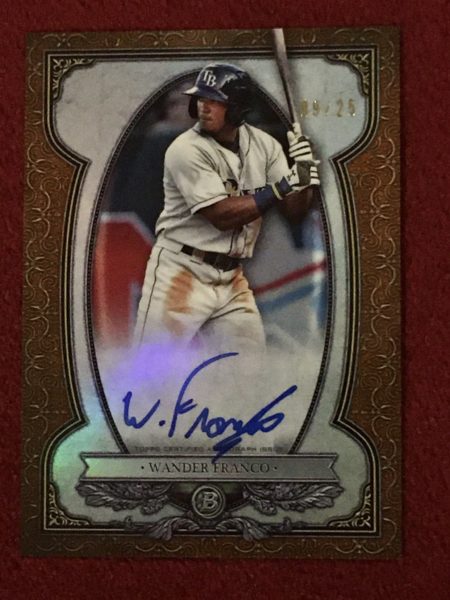 I pulled this Wander Franco Bowman Sterling Continuity autograph from a Hobby box of 2019 Bowman Baseball. There is only one autograph in each Bowman Baseball Hobby, so I was incredibly fortunate to open that box of one of the hottest products in recent memory. This is my favorite card in my collection for quite a few reasons. For one, I write about the Rays System, and consider myself one of the biggest Wander Franco truthers out there. Another would be the memory associated with pulling the card, and the raw reaction it evoked from me and my brother. Truly a special card, and a memory of breaking with my brother that I will cherish forever. — Jake Wiener (@GatorSosa) 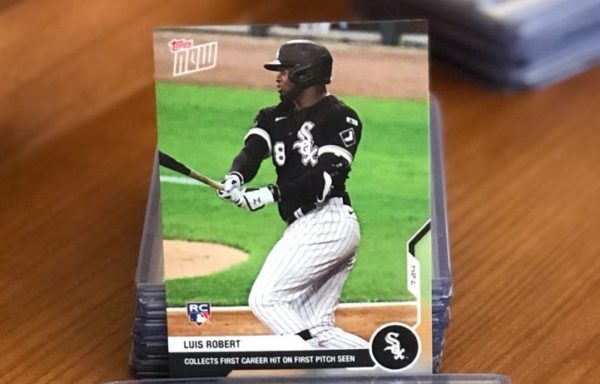 This Luis Robert rookie card, from Topps Now, is objectively and undoubtedly as fine a specimen (of rookie cards) that exist. More important to me however, are the means of which I acquired it.

My brother Andre bought this dandy as a gift, for your’s truly. There wasn’t any particular occasion for the present. Nor was there (known to me) any particular reason. Perhaps it was because I reintroduced him to the hobby that he and I enjoyed so adamantly as kids. Perhaps it’s because he’s an exemplary human being. Regardless of his reasoning, this card is unquestionably my favorite, because of three things. Its origin, the extraordinary detail with which the entire Topps Now product is predicated upon, and most importantly it’s my favorite card because it came to me as a gift. From one of my (exceedingly important) three favorite people in this universe and it came to me simply as a gift. Based upon no other reason other than—selflessness. I know that your father is as pleased with your gift to me as I am. Love you, brother and thank you. — Nate Eckert (@GQ__82)