After months of anticipating the rise of Wander Franco, Jarred Kelenic, and Andrew Vaughn, the hottest prospects after the first month of the season were… Jonathan India and Jazz Chisholm. The rise of Chisholm and India just goes to show how unpredictable the prospect market can be. Just a few months ago they were both selling for under $30. Finding those types of cards is the fun of prospect collecting though. Whether or not either of them holds value is another question.

After the two surprise breakout players, the rest of the hot value gainers were a little more predictable. Dylan Carlson, Ke’Bryan Hayes, and Bobby Dalbec have all seen time on one or both of these lists before and probably will again in the future. Others, like Geraldo Perdomo and Taylor Trammell, made the list thanks to their respective call-ups. However, if you blinked you have missed Perdomo’s first MLB appearance and Trammell has Kelenic breathing down his neck.  Will either of them be on the list next month? Check out my predictions below. 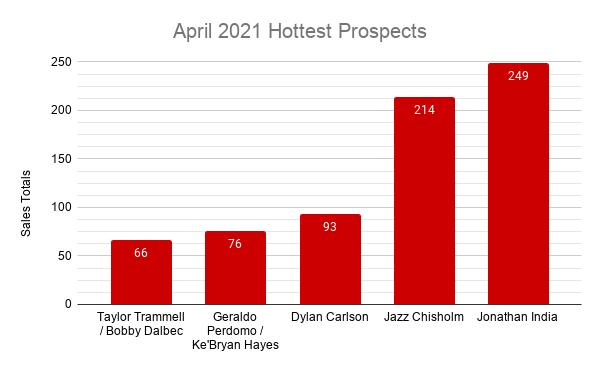 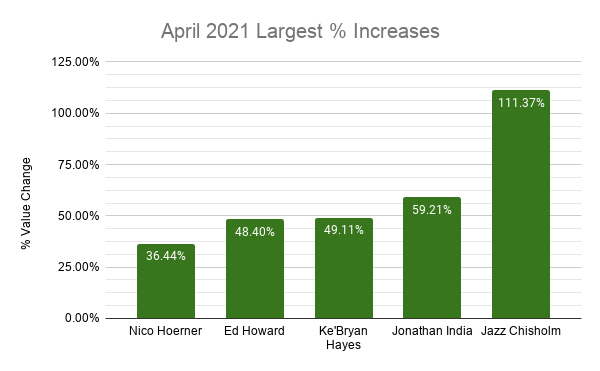 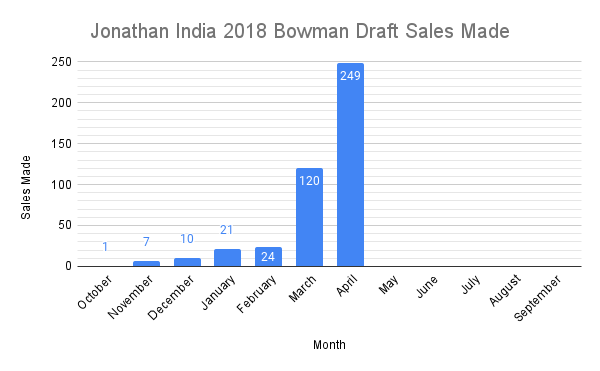 Jonathan India is one of my favorite prospects if only because his name sounds more like he should be leading expeditions through the outback rather than taking batting practice in Cincinnati. Not many collectors felt the same way leading up to the 2021 season though. From December through February there were only 55 total sales of India’s first Bowman Chrome autograph card. Interest picked up during spring training then absolutely exploded when the 2018 fifth overall pick hit .400 over his first seven MLB games. After a long offseason, the hobby was anxious for The Next Big Prospect and during the first week of the season, India filled that role nicely. But India has dropped off significantly since then so I wouldn’t expect to see him on this list again soon. 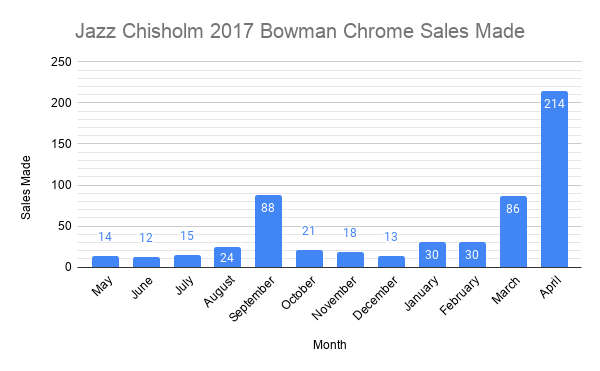 “Smooth” Jazz Chisholm got some initial hobby love after his MLB debut last September. He struggled to adjust to big league pitching during the lone month he spent in the bigs though, batting .161 over 62 plate appearances. By the end of the season it appeared that Chisholm’s brief surge was just a blip on the radar. It may have been if Smooth Jazz wasn’t named the Marlins’ starting second baseman to start the season and slashed .324/.458/.703 during the first two weeks of the season.  The offensive breakout propelled the 22-year-old back into the hobby conscience. As the Marlins develop their young core Chisholm looks to have the potential to be the face of the team. His 2017 Bowman Chrome autograph card will likely continue to be a strong seller in the hobby. 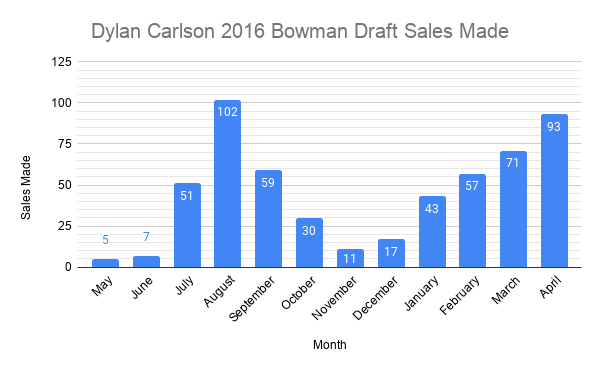 The Cardinals top prospect failed to impress collectors during his first 35 games on the major league level last season. Carlson struck out more often than he reached base in 2020 and hobby demand for the outfielder’s 2016 Bowman Draft autograph card fell sharply as a result. Sales of St. Louis’ 2016 first round pick decreased close to 50% every month from August through November. But once the calendar flipped to 2021 the Cards’ top prospect began to regain steam. Collectors that bought back in on Carlson have been rewarded as he has displayed good progress since his initial call-up last season. The 22-year-old will likely continue to be a presence in the prospect card market throughout the season. The hobby had high hopes for him in 2020 and know that he’s living more up to expectations his sales numbers and card values should continue to rise. 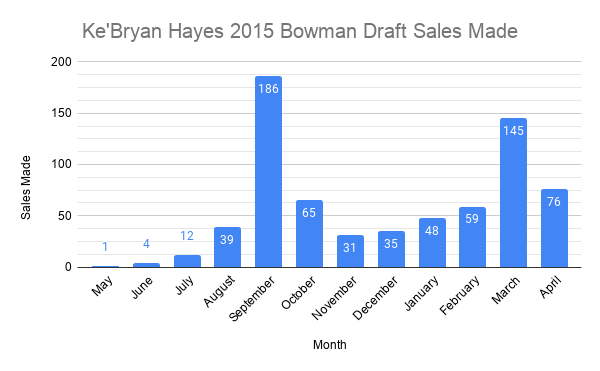 Ke’Bryan Kobe Hayes has consistently been one of the hottest selling cards since making his debut on September 1, 2020. Hayes has been such a strong presence in the hobby that he earned a spot on the April hotlist despite seeing the sales of his 2015 Bowman Draft autograph card drop nearly 50% over the last month. The drop-off is due in part to Hayes’ stint on the IL but will almost certainly rebound once he gets back on the field. 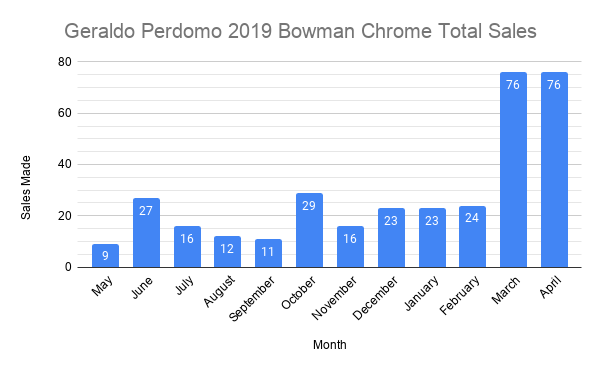 Perdomo, on the other hand, has had consistently low sales of his 2019 Bowman Chrome autograph card. Prior to spring training, his total sales were never more than 30. There was a bump when he made his debut on April 3 but he was quickly sent back down. Perdomo sales will likely drop off next month since he needs more time to develop on the farm. 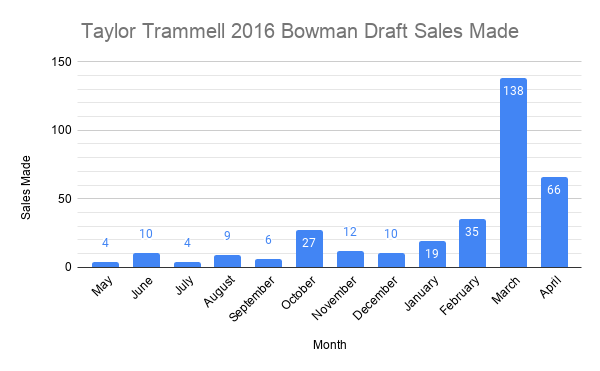 Trammell has been the odd man out in the Mariners outfield which effectively capped his sales during the offseason. Over the four months between the end of last season and Spring Training, there were only 76 total sales of his 2016 Bowman Draft autograph card. His early season performance in the Mariners outfield impressed fans and collectors which kept his sales strong. He’s dropped off in the last few weeks though and with the talent coming up behind him the surge probably won’t last. 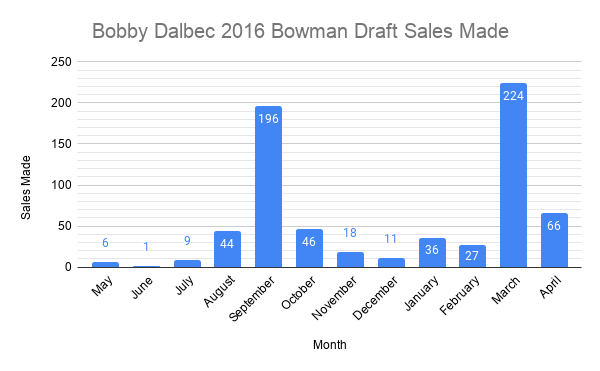 The future of Bobby Dalbec’s cards is a little more difficult to predict. Dalbec was the hottest prospect in the hobby when he debuted to the tune of six home runs in his first ten games. Dalbec didn’t perform poorly over the remainder of the year but as his home run pace slowed so did collector interest. Demand dropped significantly from October through February before exploding once again during spring training. It then dropped significantly during the first month of the season but remained high enough to keep him among the top five sellers. Will he remain there over the next six months? It’s hard to say. But as a power hitter in a Red Sox uniform, there’s a good chance we may see him on the hot list again. 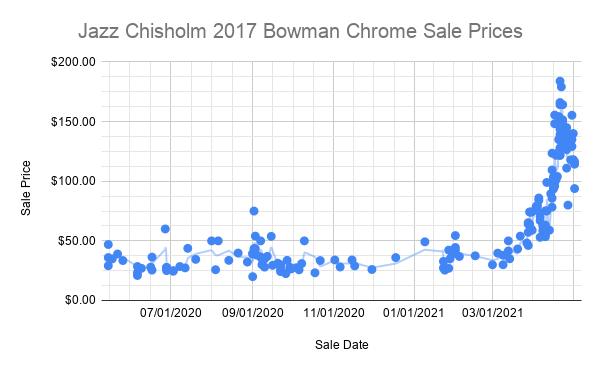 Jazz Chisholm’s 111.37% value increase from March to April was music to collectors’ ears. The average value of the 21 eBay sales of Chisholm’s ungraded, unnumbered 2017 Bowman Chrome autograph card was $52.76 at the end of spring training. After his April breakout, the average value more than doubled to $111.52. There doesn’t seem to be much sign of slowing down either. Even if the Marlins’ middle infielder cools off at the plate it’s unlikely his value will drop back down to preseason levels. 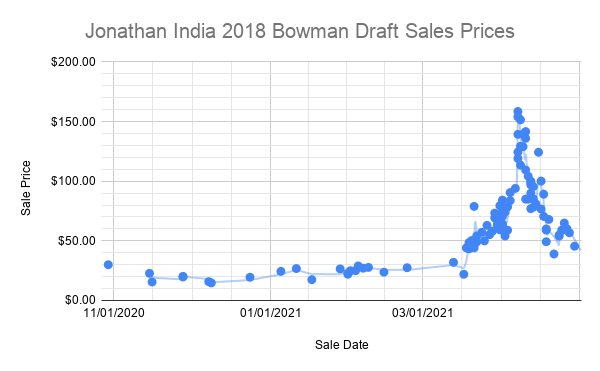 India’s value increase is really the tale of two halves. From April 1 through April 14 there were 39 sales of India’s ungraded, unnumbered 2018 Bowman Draft autograph card. Those sales averaged out to $98.62. Over the rest of the month though, there were only 18 sales that averaged $66.13. Altogether the sales averaged out to $88.36, which is 59.21% over the $55.50 average value during March. The sharp decline makes that number a little less impressive though. India’s value may not quite drop back to the $20-$25 range he was in from November through February, but it would appear he’s past his peak. 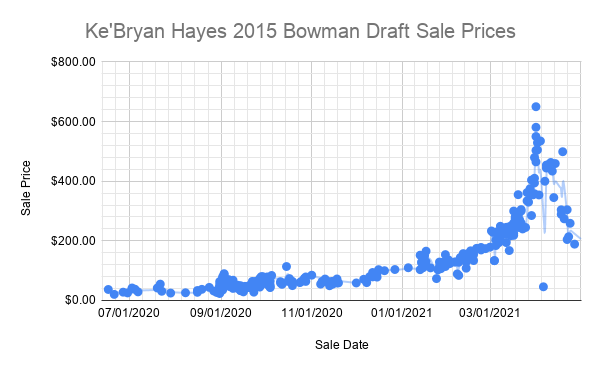 Hayes has been trending up every month since he debuted and actually may have hit his peak in early April. On Opening Day three of his ungraded, unnumbered 2015 Bowman Draft autograph cards sold for above $550, with one breaking $600. After that, his value mostly hung around $400 until he was placed on the IL. Since then, Hayes’s value has fallen into the $200 range. Hayes could certainly rebound once he gets back on the field though. Every time Pittsburgh’s third baseman seems to have reached his peak, the value keeps climbing. Hayes’ value will probably go back up when he returns but long term I wouldn’t be buying Hayes for value anymore. 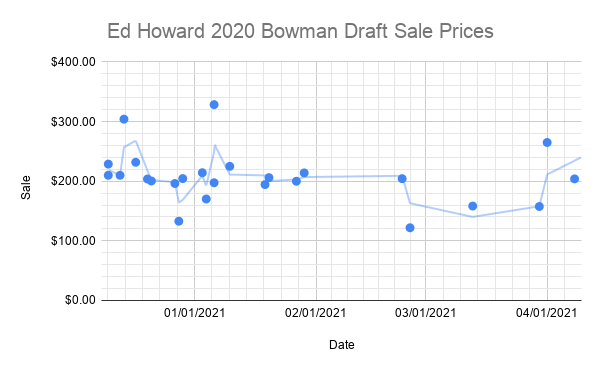 Howard’s card values dipped slightly during March, dropping down to $158.02 over just two sales. His appearance on the trending list, therefore, is more of a market correction than an actual value increase. Since his first appearance in 2020 Bowman ungraded, unnumbered copies of Howard’s first Chrome autograph have held firm around $200. With Howard’s potential, there is certainly a good chance the 19-year-old will appear on future trending lists but that still may be a couple years out. For now, Howard’s value will likely hold firm until he gets closer to the majors. 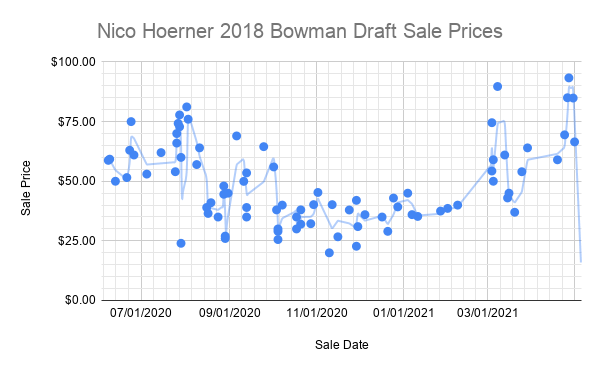 Hoerner’s card values had been steadily declining until he finally flashed the potential the Cubs had been waiting for during spring training. The hobby reacted with great anticipation as the value of his ungraded, unnumbered 2018 Bowman Draft autograph rose for the first time in months. Not starting the season on a major league roster slowed Hoerner’s sales but his value increased when he was brought up. The Stanford alum has proved his value to the North Siders so far this year by hitting .389/.500/,550. As a result, the average sale price of his first Bowman Chrome autograph increased from $57.41 in March to $76.36 in April. If he is able to keep up his current pace he should prove himself valuable to collectors as well. 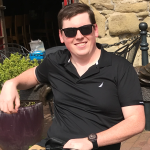