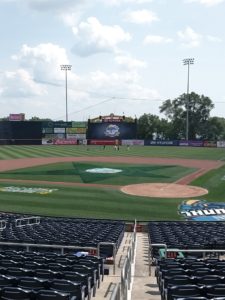 Despite only living about an hour south of the Trenton Thunder’s ballpark, Arm and Hammer Stadium, the trip to Wednesday night’s Eastern League All-Star Game was my first visit there.  After my experience on this beautiful summer night, it will definitely not be my last visit. The park has great views from every seat, the staff was so friendly and the entire place was neat and clean.  I can’t wait to visit again in August. 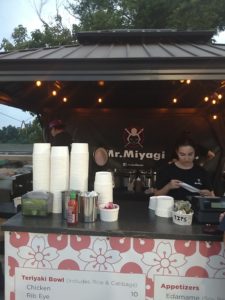 The gates were scheduled to open at 3pm.   As I walked to the park at 2:30, people were already lined up to enjoy the day. The Budweiser’s Clydesdales were outside, which are always very nice to see. There were autograph sessions scheduled at 4pm and 5pm. Tim Tebow was scheduled to sign at 5pm, but fans were lining up as early as 3pm to see him. 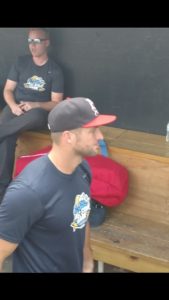 Tim Tebow started at DH for the Eastern Team, going 1-4 with a double and 1 strikeout.

The game started and it wasn’t long before two Philadelphia Phillies players left their mark.

Tonight he hits a solo shot to make it 3-0, Eastern Division in the 4th.

In the 5th inning, the Phillies were again involved with the scoring but in a different way. Philadelphia pitcher, Edgar Garcia, came in and gave up 3 runs to let the Western Division tie the game.

San Francisco Giants outfielder Luigi Rodriguez hit a home run in the 8th inning to give the West a one run lead until Trenton Thunder’s own Trey Amburgey singled home Patrick Mazeika.

The game ended tied 4-4 so it was onto a Home Run Derby to determine the winner.

But a lineout to left field ends the 9th with the score still tied. The 2018 Eastern League All-Star Classic will be decided by a special home run derby!

Each team sent one player up to take part. The Eastern Division sent up Zach Green, from the Phillies (there goes that team again) and the Western Team sent up Pittsburgh Pirate’s Will Craig.  Craig totaled 305 points to Green’s 275 giving the West the victory.

After the game was over, the Thunder announced the crowd attendance of 8,296 was the 9th largest in the ballpark’s history.

8,296 was our official attendance.

Thank you to Thunder fans, Eastern League fans, baseball fans, and men & women from all over who came out and supported us tonight.

Then to top the night off, Guinness Book of World Records announced that the Thunder hosted the most people blowing chewing bubble gum simultaneously, which was part of the after-game festivities.