On May 19, 2018, the Nationals #2 prospect (and maybe should be #1 prospect) was called up to Washington. On May 20, 2018, I watched his former team, the Harrisburg Senators play my local AA team, the Richmond Flying Squirrels.  I missed Juan Soto by one day!  Due to poor weather, and more importantly, my wedding anniversary, I was unable to make it to earlier games. The Diamond is a great place to watch a game.  As with many minor league parks, you can get great seats for a great price.  I was able to snag free tickets from my husband’s employer with an amazing view. It was cool to be surrounded by scouts and players tracking pitches.  We actually sat next to Shaun Alexander, an interesting pitcher in the San Francisco organization.  He was traded from Boston to San Francisco in the Eduardo Nuñez trade.

Even with the loss of Soto, it was a great day at the Diamond.  The stadium was having their First Responders and Little League Day at the park.  When the husband and I arrived to our seats, all the Little Leaguers were on the field throwing the ball around so I was unable to get some good pictures of the players. 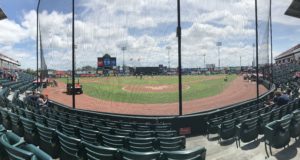 The pitching matchup was Jefry Rodriguez for the Senators and Chase Johnson for the Squirrels.  I got some cool video of Johnson’s mechanics here.  The Senators had a one run lead by the end of the first inning with a Stephen Perez double and a RBI single from Kelvin Guiterrez. Chase Johnson only lasted 3 innings, as he is returning from Tommy John surgery but the Senators were making a bunch of loud, hard contact. Jefry Rodriguez pitched a good game, as he faced the minimum and allowed no hits through the fourth inning. Jerry Sands would break up the no-no with a huge homer to left field.  However, it would be the only run Rodriguez in six and one-third innings.  The player of the game had to be Kelvin Guiterrez, who finished a home run short of the cycle and a stolen base as well.  He was also no slouch in the field, making a great pick and throw to get Jerry Sands in the bottom of the second. Daniel Johnson went 1-5, with that one hit being a long triple to deep center field. While watching Johnson, I noticed how aggressive he is at the plate. He swung early and often and will be an issue the further he moves up the ranks in the minors. Bryan Harper also made an appearance, relieving Rodriguez in the seventh inning with a man on first.  He stuck out Dillion Dobson swinging and got Ronnie Jebavy to fly out to right.  After some defensive miscues by the Flying Squirrels, the Senators got the win, beating Richmond 8-2. 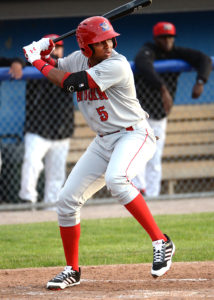 Even though we missed out on seeing Soto, we had a great time at the Diamond!  I was most impressed with Kelvin Guiterrez and will be following him for sure.