Let me begin by saying, I’m already looking ahead to next July and planning the All Star Weekend trip to Washington, DC and hopefully covering the Futures Game again for Prospects1500.  Now following last week’s Double-A Eastern League All Star Classic at Northeast Delta Dental Stadium in Manchester, NH (hosted by the New Hampshire Fisher Cats and thank you Tyler Murray for allowing Prospects1500 to cover the events) I’m trying to figure out if I’ll be able to venture down to Trenton, NJ just days after Washington next July for the 2018 edition of the Eastern League’s All Star festivities.  It’s definitely worth it!

Being at a minor league baseball All Star Game is a treat.  Go the night before and catch the HR Derby.  The stands will probably not be packed and you get a chance to see some of Double-A’s most talented hitters swinging for the fences, AND very likely taking some time to meet fans and sign autographs.  Angel Pettitt, one of our Prospects1500 Yankees contributors, was at this year’s Eastern League HR Derby in Manchester and all reports indicate it was worth spending a few hours to go see it.

I was able to attend the following evening for the All Star Game itself. Of course being a Red Sox fan I was excited about seeing Rafael Devers, who had just played three days prior in the Futures Game in Miami. Some expected but it wasn’t announced yet but this would be his last Double-A appearance for the Portland Sea Dogs as he was promoted to Triple-A Pawtucket just two days later. I’m also one that believes you often see some of the best talent in all of Minor League Baseball in AA as opposed to AAA, and this All Star Game was a great stage for that. Even though the East All Stars defeated the West All Stars 7-1 (putting up a 7-spot in the 7th off Jairo Labourt and Lucas Long), the score wasn’t the story or the reason why I was there. I wanted to watch some of these top AA prospects up close and be able to provide our Prospects1500 readers with a little snapshot of that night and what might be to come in the near future.

My photos from the evening can be seen in my Flickr photo album: 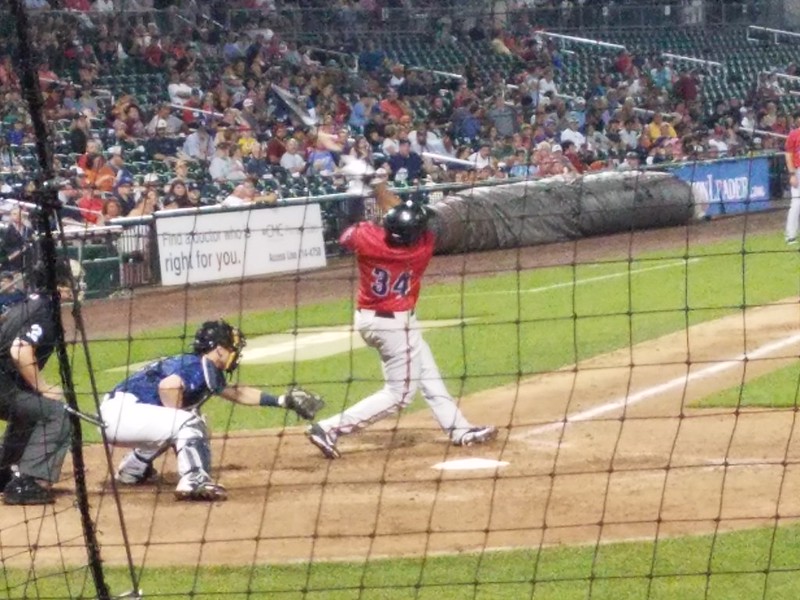 It’s great to see all of the players sitting at tables around the park hours before the game to sign autographs for all the fans. The lines were long but you could pretty much get to most of the players and some people I saw had most of, it not all, of the Eastern League All Stars player poster signed. 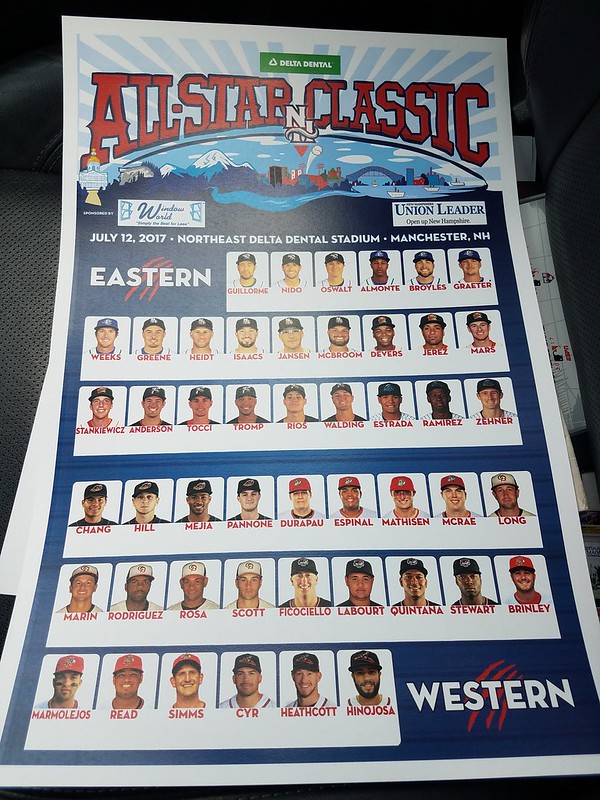 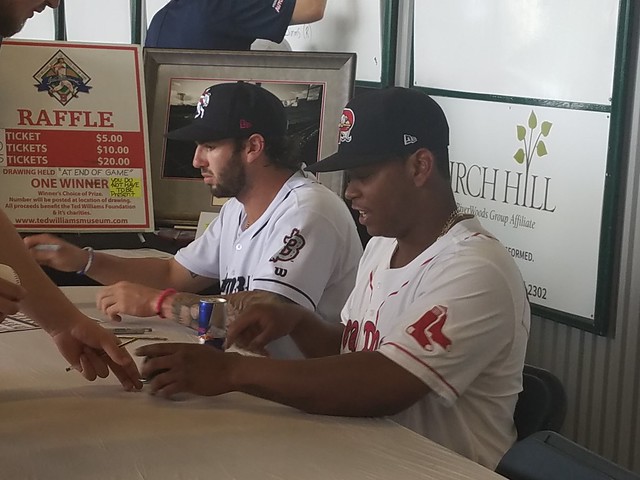 Rafael Devers, 3B, BOS
Devers started at 3B for the East and batted cleanup. He continued his torrid hitting pace in the first with a hard single to right. His bat is so quick and the sound of bat on ball with his swing is so nice. He struck out in his only other AB but this 20-year-old looks like the real deal. Already tearing the cover off the ball in Pawtucket, does he get the call this season to Fenway? That’s the big question. On a side note, Devers’ Portland teammate OF Danny Mars played the whole game and went 3-4 with a double, run scored and RBI.

Zach Zehner, OF, NYY
Trenton’s Zehner turned out to be one of the offensive stars of the night for the East, and that was off the bench! Hartford Yard Goat Drew Weeks got the start in right field and Zehner came on in the top of the 5th as a defensive substitution. He went on to go 2-3 with 2 RBIs including a bases loaded go-ahead single in the 7th inning.

Thairo Estrada, SS, NYY
Estrada was one of the players Angel Pettit was there to see, being one of our Yankees writers and a New York fan himself. Estrada got on base 3 times going 1-3 with a run scored and 2 BB’s. He hit second in the order and was able to show off some of his bat skills and speed in this ASG. He’s only 21 so still plenty of time for him to develop but he’s a name deep dynasty league owners should know.

Luis Guillorme, 2B, NYM
Guillorme is having a solid season with the Binghamton Rumble Ponies, hitting .290 as of July 18. He led off for theEast All Stars in this contest and was 0-3. That doesn’t tell his story of course with one hitless evening. I’ve seen him a couple other times this season in Hartford at Yard Goats/Rumble Ponies games and he has a solid bat, having had some success early this season in Dunkin’ Donuts Park. I see him as a future utility-type player and probably not a starting 2B or SS, but with the Mets, hey you never know!

Conner Greene, P, TOR
One of the hometown Fisher Cats, Greene pitched the 3rd and 4th innings (only pitcher in the game to go more than 1 inning) and did impress! Greene was impressive and the Manchester crowd loved it. In two innings he gave up a couple hits but 0 runs and 4 K’s. Most importantly he was consistently in the high 90’s, topping 100 a few times and looks to be a fireballing arm in the Blue Jays near future. Possibly a rotation guy but in my opinion more likely a power bullpen arm.

Jairo Labourt, P, DET
Even though he ended up being the losing pitcher in this All Star Game, Labourt’s stuff still looked pretty good. The Tigers felt good enough about him to promote him to Triple-A Toledo right after this contest. He gave up 2 runs on 1 hit, 1 walk but fanned 2 in his inning of work. As Labourt was a key part of the David Price to Toronto deal a couple years ago at the trade deadline, Detroit is holding out hope his hard throwing helps them out in a relief role (having been converted from a starter) in the not too distant future.

Tanner Scott, P, BAL
Scott, like Devers, was a Futures Game representative on hand here as well to play in this Double-A All Star Game representing the Orioles AA affiliate Bowie Baysox. He too was tossing in the high 90’s (like he did in the Futures Game when Vladimir Guerrero, Jr. turned on one and lined a single) but didn’t have any strikeouts and worked around a hit and a walk for a scoreless inning.

Tomas Nido, C, NYM
The other Futures Game/Easter League All Star on the roster that played. Nido only had one at bat through four innings and was replaced at catcher in the 5th.

Francisco Mejia, C, CLE
Arguably Cleveland’s #1 prospect (as he’s ranked in our Prospects1500 Indians Top 50 from earlier this year), Mejia wasn’t the star of this game like he has been in many others so far this season. 0-3 with a strikeout was his line for the night but if you can see this Akron Rubberduck play, go do that. Whether it’s in Akron or on the road in Binghamton, Hartford, Trenton, Manchester or wherever else before he gets promoted to Triple-A or even the major leagues, go do that. He’s exciting and anyone who puts up a 50 game hitting streak (even in the minors) has to be pretty special.  The beat goes on for Mejia this season as he’s currently posting a .325 BA, with 10 HR, 35 RBI and .907 OPS in only 64 games.

Christin Stewart, OF, DET
Stewart of the Erie Seawolves is one of the Eastern League’s HR leaders. I got to see some of his impressive batting practice and he batted cleanup for the West All Stars on this night. He was 1-2 and that was one of the 5 hits the West team put on the board. 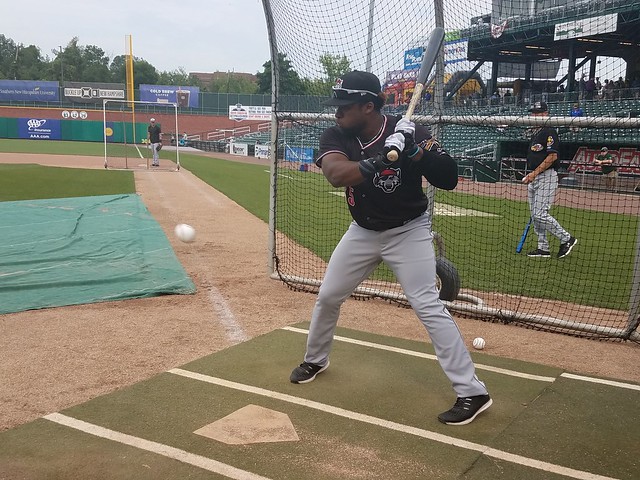 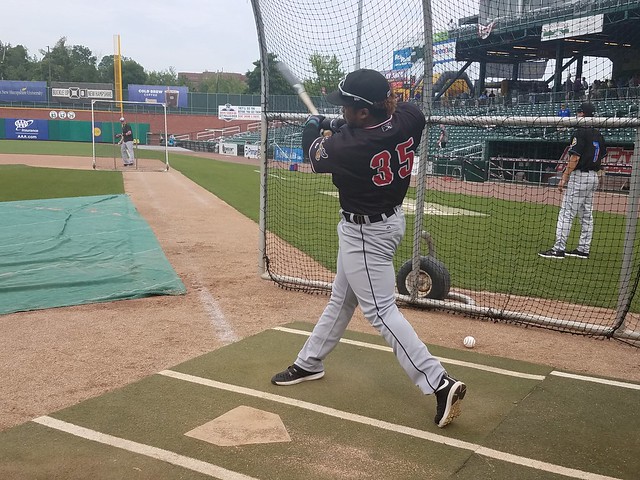 Jose Marmolejos, 1B/OF, WAS
I was pretty excited to see this young Nationals prospects in person. Our Prospects1500 Nationals writer Shelly Sclater has a lot of good things to say about Marmelejos and saw him back in May at a Harrisburg Senators game. Marmolejos was 0-2 in this game but I did come away from the night with a positive outlook for his future and ability to contribute at higher levels. Check out some of his batting practice:

Yu-Cheng Chang, SS, CLE
Chang, one of the Indians top prospects, had the only RBI for the West All Stars. He followed up an Aderlin Rodriguez double with a double of his own in the 2nd inning off Yankee Yefry Ramirez. That turned out to be their only run of the game and Chang K’d in his only other at bat. I can definitely see him getting major league PT, potentially as a utility IF to play in the other spots to either side of Lindor. His bat projects to be solid average with some sneaky power (19 HR already this year).

Slade Heathcott, OF, SF
It seems like Heathcott was one of the Yankees top prospects just a few years ago. Oh yeah, he was. Drafted by New York in the 1st round back in 2009, Heathcott has logged almost 2,000 career MiLB at bats. He spent almost 7 years in the Yankees system before being released in May 2016 when the Chicago White Sox picked him up and assigned him to Charlotte. But he elected free agency this past offseason and the San Francisco Giants took a chance on him and assigned him to Double-A Richmond Flying Squirrels. He’s hitting .267 through 82 games this year, with 12 HR and 30 RBI and is having a solid enough season to make the Eastern League All Star team. I just don’t think we’ll be seeing him in AT&T Park anytime soon. The 26-year-old led off the game and was 1-4 on the night with 3 strikeouts.

I always try to get a picture or video of the game’s first pitch when I go to a ballpark. Here’s Heathcott facing Corey Oswalt in the Eastern League All Star Classic’s first pitch of the game. 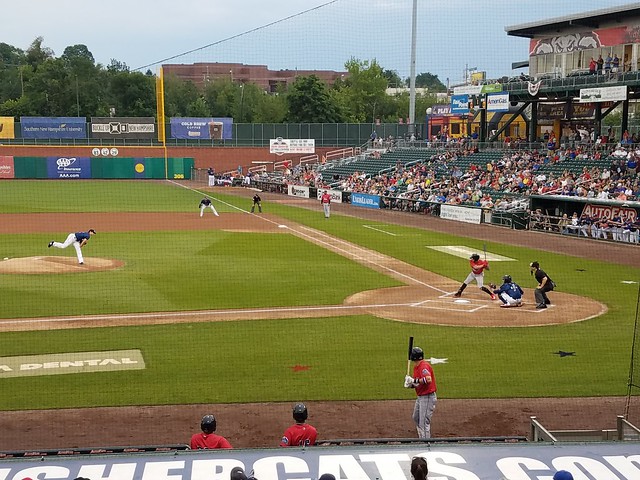 To sum it all up, it’s talent a-plenty at any Double-A All Star Game, and this year’s 2017 Eastern League version was no different. Several of these players will be in the big leagues soon. I attended the same All Star Game 4 years ago in New Britain, CT and some of those All Stars are names you might recognize and have spent at least some time in MLB. They read like a who’s who – Anthony Ranaudo, Tyler Austin, Brian Goodwin, Josmil Pinto, Danny Santana, Jameson Taillon, Tommy Kahnle (yes, that Kahnle), Joe Panik, Hernan Perez, Steven Souza, Jr, Aaron Barrett, and others. Not prerennial major league All Stars, BUT major leaguers. Let’s keep an eye out over the next few years and see how many of the players I listed above or others on the 2017 East and West rosters do eventually get that call.