Townes Van Zandt reviews the early 2017 results of the top Mariners prospects on “High, Low, and In Between.”

Kyle Lewis, “High, Low, and In Between” rehabbing torn ACL: 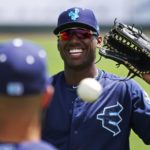 What can you leave behind
When you’re flyin’ lightning fast
And all alone?
Only a trace, my friend,
Spirit of motion born
And direction grown.

Ben Gamel, “You are Not Needed Now”, in Safeco RF:

The trains roll by every half an hour
And the body can get no restin’ done, that’s true
So I do my best, as best I can
Thinkin’ big and making plans
And wondering where them trains are rolling to.

Tyler O’Neill, AAA “Two Hands”, walking back to dugout after another K:

Well now, this old world sometimes it does get lonesome
And it’s many a grown man has hung his head and cried
Down in your soul there’s one that won’t desert you
Ain’t it fine to have the Savior by your side.

Mitch Haniger, DL “Greensboro Woman”, anxious to get back to destroying the AL:

Greensboro woman don’t you smile on me
I do not feel like being comforted
and anyway I’ll be home soon
for once is someone waitin’ there
and if you don’t mind
I just think on her instead.

Time among the pine trees
It felt like breath of air
Usually I just walk these streets
And tell myself to care.
Sometimes I believe me
And sometimes I don’t hear.
Sometimes the shape I’m in
Won’t let me go.

Andrew Moore, AA “No Deal”, coming soon to a 6th inning relief appearance near you:

Now this man down at the used car lot
Tried to sell me four wheels and a trunk.
I said, “Man, there is no engine!”,
He said, “The engine’s just a bunch of junk.
You don’t need no engine to go downhill
And I could plainly see, that that’s the direction
You’re headed in”, and he handed me the keys.

Nick Neidert, High A “To Live is to Fly”, taking it a day at a time in the Cal League:

Days, up and down they come
Like rain on a conga drum
Forget most, remember some
But don’t turn none away
Everything is not enough
And nothin’ is too much to bear
Where you been is good and gone
All you keep is the getting there

To live is to fly
Low and high
So shake the dust off of your wings
And the sleep out of your eyes.

Thyago Vieira, AA “When He Offers His Hand”, throwing it really hard:

He send his deuce down into diamond
His four to hart, and his trey to spade
Three kings with their legions come
Preparations soon where made

Well, he gave his sevens first instructions
Spirit me a game of stud
Stakes unscarred by limitation
Between a man named Gold and man named Mud

Club filled Gold with greedy vapors
Till his long, green eyes did glow
And Mud was left with the sighs and trembles
Watching his hard earned money go

Now, the Diamond Queen saw Muds ordeal
Began to think of her long lost son
Fell to her knees with a mother’s mercy
And prayed to the angels every one

Now, the Diamond Queen, she prayed and prayed
And the Diamond Angel filled Muds hole
The wicked King of Clubs himself
Fell in face down in front of Gold

Now, three kings come to Clubs command
But the angels from the sky did ride
Three kings up on the streets of Gold
Three fireballs on the muddy side

The club queen heard her husband’s call
But Lord, that Queen of Diamond’s joy
When the outlaw in the heavenly hall
Turned out to be a wandering boy

Now, Mud he checked and Gold bet all
And Mud he raised and Gold did call
And the smile just melted on his face
When Mud turned over that diamond ace