Let’s take a look around the Red Sox minor leagues and see how some of Boston’s Top 50 prospects, and some players who didn’t make that list but maybe should be on there, have done over the first month of the season.

Triple-A: Pawtucket Red Sox
Rusney Castillo, OF – The 30-year-old OF signed out of Cuba in August 2014 has been toiling in Triple-A for most of his stateside career and I don’t see that changing anytime soon. Of all 2018 PawSox he does have the most at bats and is leading the team in AVG (.312), RBI (13), total bases (43) and tied for team lead in SB (4, with Aneury Tavarez). Unless there’s a major need for another OF at the MLB level, expect Castillo to lead the International League in several categories this year.

Jeremy Barfield, DH – My 44th-ranked Sox prospect, this AAA experiment hasn’t worked out well so far this year for the 29-year-old. Barfield tore up AA and a few games at AAA last season, but in 78 at bats he’s slashing .141/.233/.256 with only 2 HR and 30 strikeouts. That’s not going to get him a call up to Fenway. Time may be running out on this Barfield and the next couple of months will certainly go a long way to telling his underdog story.

Jalen Beeks, LHP – This 24-year-old lefty has succeeded at each MiLB level and looks to be ready for the bigs. Boston should look to him at some point when they need another starter. Beeks has been very good through his first 5 games started, going 2-1 with a 1.71 ERA and 0.95 WHIP in 26.1 IP with 46 punchouts! He’s on the cusp of the majors and I can’t believe we’re still waiting on his first Bowman baseball card. Come on Topps! And he just cracked @fantasybbhero‘s updated Top 100 dynasty fantasy baseball prospect rankings, coming in at #95.

Jalen Beeks’ 96th and final pitch of the night is, what do you know, another strikeout.

Chandler Shepherd, RHP – I wasn’t as high on Shepherd as other Red Sox prospectors coming into 2018. I had him 39th out of 50 on my preseason list. Unfortunately my views have held true for the first month and he’s not proving me wrong yet. Through 5 games he’s 1-2 with a 5.33 ERA and 1.46 WHIP. Having given up 29 hits and 15 ER in 25.1 IP, his struggle is real so far. The talent is there to get things turned around and hopefully the warmer May/June weather will help. He could be on the right track coming off a win and 7 shutout innings this weekend.

Double-A: Portland Sea Dogs
Cole Sturgeon, OF – This 26-year-old OF has spent the better part of the last 3 years in Portland, with 2018 his 4th season as a Sea Dog. Usually that doesn’t bode well for advancing in a baseball career but things are really clicking for him at the plate now. He’s hit in 19 of his first 24 games, with a .372/.444/.606 slash line. That’s 2nd in the Eastern League in average (behind Toronto’s Vladimir Guerrero, Jr.). He’s not known for his power (6 HR in each of the last two seasons) but already has 5 round trippers this year, with 13 RBI, 5 SB and 57 total bases (3rd in the league). A 1.051 OPS isn’t too shabby. 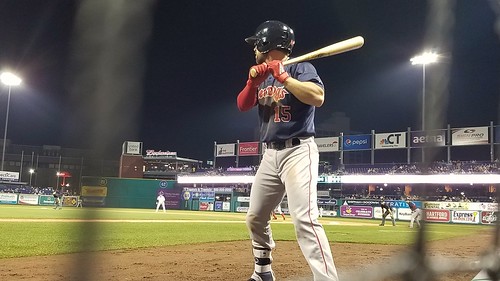 Esteban Quiroz, 2B – Truth be told I didn’t know much about Quiroz coming into 2018 and ranked him #43 on my Red Sox Top 50 prospects. From what I’ve seen so far this year in person, on video and in the box scores, this is an infielder who could easily crack my Top 30 midseason list, maybe even Top 25. He’s the only other Sea Dog with an OPS over 1.000 (1.016 as of 5/6) and is second on the team (behind Sturgeon) with 4 HR. He’s been on the MiLB disabled list and hasn’t played since April 23rd, so his season stats could be even more impressive. This is a player you should be keeping your eye on in deep dynasty leagues which roster 30 or more players per team. 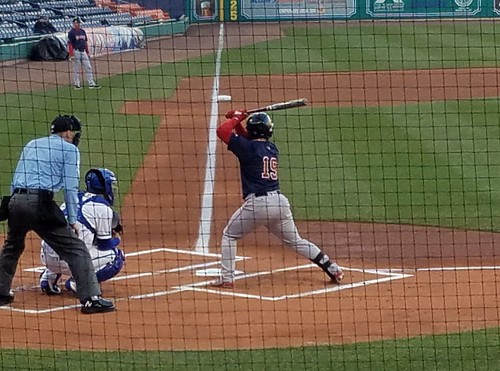 Josh Ockimey, 1B – For some reason I have a man crush on @josh_ock, maybe because I love his Twitter handle. I’ve also started collecting a rainbow of his 2018 Bowman cards. On the field Ockimey has gotten off to a fairly slow start in Portland (.222/.354/.370) with 2 HR and only 9 RBI but he has walked 11 times. 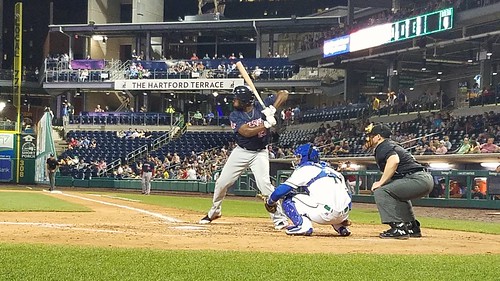 Mike Shawaryn, RHP – Another prospect crush of mine – number 6 on my Red Sox list. In his first taste of AA action, Shawaryn is holding his own through 5 starts. With a respectable ERA (3.62) and WHIP (1.13), he can hopefully continue putting up solid numbers in the Eastern League as the Sox aren’t rushing their 2016 5th round pick out of Maryland. His 6.9 K/9 is significantly down from his previous seasons (11.3 in 2017 and 12.6 in 2016) but his walks are down and WHIP is lower so the control is seemingly improving.

Travis Lakins, RHP – Number 14 on my Sox 50, Lakins just made his 2018 debut on April 24 in Hartford. His 2017 season had been cut short to due injury and he’s been working his way back from a stress fracture in his elbow last summer. He was very impressive in that first start hurling 3 innings giving up only 4 hits and no earned runs, while striking out three. The Yard Goats were his opponent again for his second start on  May 3 which I was in attendance for. Lakins sat mid 90s for the most part on his fastball and looked very good again as the Sox are being cautious with his innings. He again only went 3 innings, this time giving up only 1 hit and setting 5 down by way of strikeout. 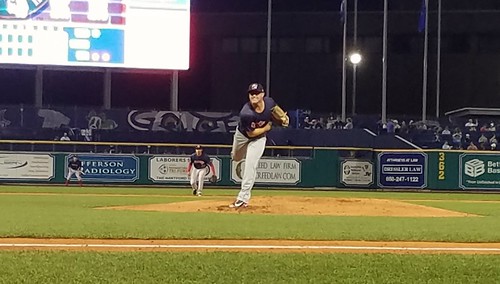 Advanced-A: Salem Red Sox
Santiago Espinal, SS – Boston’s 10th round pick in 2016 is putting up some solid numbers early this season at High-A Salem. His slash line is pretty impressive at .288/.356/.500, while he’s tied for second in the Carolina League with 22 runs scored. He leads Salem with 52 total bases and is second on the team with 4 HR and 14 RBI.

Bobby Dalbec, 3B – His struggles have been real for the last couple seasons, despite his impressive power stroke. Dalbec leads the team in HR (5, tied for 2nd in the league) and RBI (18) but his 35.3% K% is still something to be concerned about. He’s not hitting above the Mendoza line either (.189 through 28 games) and this is going to be a major hurdle for him to overcome if dreams of moving up the farm system ladder to Portland is in his future.

Roldani Baldwin, C – In limited time so far Baldwin has been very impressive and could be one of Boston’s best backstop options in the near future. In only 32 at bats he has 10 hits including 3 doubles, 2 HR, 5 RBI and a .965 OPS.

I also have to ask. Is there a better or higher profile starting rotation in the minors than what’s going on in Salem? Boston’s Advanced-A affiliate throws Bryan Mata, Jake Thompson, Tanner Houck, Darwinzon Hernandez, and Roniel Raudes. Some big time prospect names there, and neither of them have even been the best pitcher on the team.

Daniel Gonzalez, RHP – The 22-year-old Venezuelan hasn’t started a game for Salem but couldn’t have had a better month coming out of the bullpen. In 8 games Gonzalez’s stats look like this – 5-0, 26 IP, 2.42 ERA, 1.19 WHIP and 33/3 K/BB ratio. I need to check in with SoxProspects.com again as I was high on Gonzalez going into 2018 based on his stellar 2017 campaign. @SPChrisHatfield told me on Twitter that Gonzalez “had no physical projection” and wanted me to “consider how he’s been bounced between levels and roles.” I had him #26 on my Red Sox Top 50 and he’s what I said back in January:
Here is one Red Sox prospect who I am likely higher on than most other lists/rankings out there. Some say he’s 21 and too old for A+. I say he’s ONLY 21. Sure he’s been around since 2013 when he was signed out of the Dominican Republic and spent two years in Rookie ball. Then 3 years in Lowell, Greenville and lastly High-A Salem from 2015-2017 brings us to his 22-year-old season in 2018. If he can follow up what he did in 2017 (12-2, 2.78 ERA, 1.02 WHIP, 9.0 K/9) then I will not be surprised to see him contributing (some starts, some relief appearances) in Portland, with an outside shot to reach Pawtucket this year.

Full Season-A: Greenville Drive
Lorenzo Cedrola, OF – He’s one of my favorite Red Sox prospects and I had him #9 in the system coming into 2018. Cedrola’s first game was on April 26 so he got a little bit of a late start. Even so, he’s hit safely in 7 of his 9 games to the tune of a .351 batting average to go along with a .415 OBP. Contact, speed and defense are his game. I said it before and I’ll say it again. Grab him in all dynasty leagues now before you regret it and one of your league mates does.

Victor Acosta, OF – The 21-year-old out of Venezuela saw 31 games at High-A Salem in 2017 but the Sox decided to start him back at A-ball Greenville for the 2018 season and he’s been taking advantage of that placement. Acosta is 2nd in the South Atlantic League in hitting (.342) and if you add that to his .400 OBP and .534 SLG, that .934 OPS through 20 games is pretty impressive. He’s keeping his strikeouts down (only 10 in 80 plate appearances) and has 2 HR and 8 RBI on the young season.

Marino Campana, OF – Unranked on my preseason list. Campana leads Greenville with 4 HR and 17 RBI although his slash line of .237/.290/.430 is not that impressive. His 29% K% is not good either. Do we chalk up this power and run production to a little bit of a hot start? Possibly. Let’s keep an eye on Campana and see how a full season at A-ball goes.

Alex Scherff, RHP – Boston’s 5th rounder in 2017 has had some lofty expectations since last June’s MLB Draft when he was selected out of Prestonwood Christian in Plano, TX. He did not spend any time in Rookie ball last year so this stint in Greenville is his first taste of pro ball and it’s been a rough go of it so far. In his first 5 games started he’s 0-3 with a 7.25 ERA. That’s 18 ER in 22.1 IP if you’re keeping track. If there’s a silver lining consider he’s only given up one home run. Look for the 20-year-old to settle in as the weather heats up over the next couple months in South Carolina.

Kutter Crawford, RHP – Selected in the 16th round last year, Crawford doesn’t have the same high round expectations that Scherff, Houck and Thompson carry, but he is pitching up to make the organization take notice. The Florida Gulf Coast product has been lights out in his 6 games started, which his 0-1 record does not reflect. Through 30 innings pitched he’s allowed only 6 ER (1.80 ERA) and has 40 K’s to go along with only 9 walks and a .212 average against. This is one player who I will be watching closely over the next few months and at this rate he could be a lock to enter my midseason Red Sox Top 50. He recently moved up 24 spots into the Top 40 on SoxProspects.com.