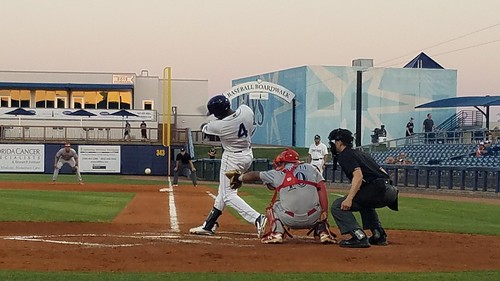 Sanchez profiles as a power-hitting RF.  He has an athletic build, thick lower half, strong arms.  Sanchez should add a bit more strength as he ages and has the frame to carry it.  Wrists are loose, powerful, and lightning fast through the zone.

His stance is slightly closed with his hands low and close to his chest.  High leg kick with his hands quick to the load position. Sanchez stays balanced through the zone and allows his hips and hands to work in concert to generate plus bat speed.  He consistently barrels premium velocity hard to pull side.  Stays closed against left-handed pitchers, producing hard contact the opposite way. Swing has natural loft.  Will take big swings on breaking balls early in the count if they are in the zone.

Despite only 4 walks in 165 at-bats, Sanchez will work the count.  Very animated with his takes.  Good pitch recognition.  Will spit on tough sliders down in the zone  from righties and breaking away from lefties.  Waits for his pitch and does not miss.  I did not see him hit any off-speed pitches for base hits.  Able to foul off tough off-speed until he got fastballs.  Aggressive on a few change-ups that led to pop-ups.  Advanced pitchers will challenge him with off-speed in hitters counts.

Has 50 grade speed.  Gets down the line quickly but speed won’t translate to stolen bases.  Arm is above average in RF as is defense.  Gets good reads on the ball with crisp routes.  Not a gold glover in RF but should rack up outfield assists.