With the 2021 Minor League Baseball season approaching closer each day, the buying window for certain potential breakout prospects is closing soon too. The Rays have a plethora of interesting players to target from their stacked farm system. We all know the big names like Wander Franco and Vidal Bruján, but if you tried acquiring those two in your dynasty league it is going to cost you a pretty penny. However, in this article, I will outline seven players from Tier 3 and Tier 4 of our Rays Top 50 prospects whom I am personally targeting in all of my dynasty leagues. These are players you will want to acquire cheaply right now, and then reap the benefits later when they rise up prospect boards.

And a quick side note before we completely dive in, I just want to shout out Heriberto Hernandez. He is our 8th ranked Rays prospect and is in Tier 2, so I think he is too notable for this article, but just know that I highly recommend you acquire him in your dynasty leagues if possible. With that being said, let’s dive in.

We kick things off with Mr. Pie, who we ranked at the top of our Tier 3. I expect Alejandro Pie to take the prospect world by storm this year. He is an athletic infielder with a projectable frame. He was a DSL All Star in 2019 and received strong reviews from scouts. The reports from 2020 camp were quite promising too, noting Pie’s added strength and improved defense. Considering he stole 24 bases in 2019, adding some pop to his game would turn him into a stud. Scoop him up in your dynasty leagues before he debuts stateside, as his price will likely rise after that.

I love Taylor Walls, and you should too. Walls does not have as inherently flashy tools as Pie, but he is appealing in other ways. Walls is basically MLB ready, so he can help out your dynasty team soon. His best tool is his defense, as he is the best defender in the Rays system, but he also packs a punch at the plate. Walls very quietly put up an excellent 10/28 season across two levels in 2019, with a combined slash line of .270/.343/.452. That is a pretty reasonable peak projection of what to expect for his career long term. He has the speed and on-base skills to put up 30+ SB if he gets everyday ABs. His power isn’t exactly a focal point for him, but he made strides in that department in 2019 and should be able to get double digit HR over a full season. The Rays infield is crowded, but Walls should earn his way into playing time one way or another.

Johnson’s first full professional season was wiped out due to the pandemic. If the 2020 season was played, it is very possible he would have broken out already and be too mainstream for this list. Johnson converted from shortstop to pitcher in college, and the hype built up around him. The Rays snagged him in the 1st Round (CBA) of the 2019 MLB Draft. Johnson is still relatively new to pitching, but already possesses an above average fastball and slider. Being a converted pitcher, Johnson also has the benefit of less mileage on his arm compared to the average college pitcher. I recommend acquiring him now while the price is still reasonable, as the Rays development staff could help Johnson become an elite pitching prospect.

Catchers are not the most appealing players for fantasy baseball, but Hunt is an exception. He is poised to be the Rays catcher of the future. Coming over from San Diego in the Blake Snell trade, all the reports regarding Hunt have been promising – including recent reports from Spring Training. Prior to the trade, Hunt arrived to the Padres’ alternate training site last summer with a new mindset and improved swing mechanics. This enabled him to unlock more game power. His defensive skills are plenty sufficient too, as he has a strong arm and good instincts. With Ronaldo Hernández being traded to Boston, the door is open for Hunt to seize the Rays catcher job soon. I recommend acquiring Hunt in your dynasty leagues now, as he is quickly setting himself up to be one of the top catching prospects in baseball.

Ian Seymour is a prospect I’ve managed to acquire on all of my dynasty teams, and I’d recommend you try to do the same. Seymour pitched well at Virginia Tech before being selected in the 2nd round of the 2020 MLB Draft. He is armed with a plus changeup and an exciting fastball. Scouts liked how he looked during Fall 2020 Instructs, as he showcased a velocity bump. There is some relief risk here due to his mechanics, but I have a lot of faith in the Rays development staff getting the best out of Seymour.

Hakanson is probably the most under-the-radar name listed here. The Tampa native was a lights-out closer for UCF prior to being drafted in the 5th Round of the 2020 MLB Draft. He possesses arguably the best fastball of any pitcher from his draft class. The knock on Hakanson from a fantasy perspective is that he is a reliever, as RP are not as valuable as SP, but his elite extension and exciting raw stuff could enable the Rays staff to develop him as a starter. Whether he ends up as a SP or RP, I want to roster him along the way. If your dynasty league is deep enough, I’d recommend adding him too.

It is possible our #38 ranking of Strotman could look too low as early as this summer, since a breakout could certainly be in store for him this season. He was a New York-Penn League All-Star in his first pro season, 2017, with a 1.78 ERA and 0.75 WHIP. He started strong in 2018 too, but unfortunately suffered an injury and underwent Tommy John Surgery. He worked his way back and appeared in the 2019 Arizona Fall League. He looked sharp during the AFL. Also that fall, the Rays added him to the 40-man roster to protect him from the Rule 5 Draft. Then in 2020, he showed up to Fall Instructs with a new low-90s cutter, and with his pre-surgery velocity. If these intriguing trends from Instructs hold up over a full season, then Strotman will soon be a well-known name. He is rather cheap to acquire right now in dynasty leagues, so I would recommend buying and then intently watching his 2021 season. 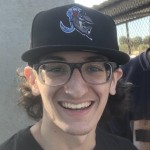 Hello, my name is Bailey Srebnik. I am the Social Media Manager for Prospects1500, and I am also the Florida State League correspondent and Tampa Bay Rays co-correspondent. I am a junior in High School, residing in the Ft Lauderdale area. Living in FL, I enjoy going to Spring Training games each season. I also attend many MiLB games each year, mainly in the Florida State League. I root for the Baltimore Orioles, Tampa Bay Rays, Miami Marlins, and Daytona Tortugas. I am currently in 4 deep dynasty baseball leagues, which is fun. Being a person who enjoys math, I’m also really into the sabermetrics. I find it fascinating. When it comes to music, I am a big fan of Oasis and The Killers. You can find me on Twitter at @xwOBAiley. Thank you for reading.