There was some unfortunate news recently regarding highly touted prospect Royce Lewis, as it was reported that he tore his ACL. Per the report:

Lewis will fly to the Twin Cities and will undergo reconstruction surgery on Friday with Dr. Christopher Camp, the club’s orthopedic surgeon. The Twins won’t have clarity as to Lewis’ recovery timeline until the procedure is complete, but Falvey said it typically takes players nine to 12 months to return to full play following this type of surgery.

He has since undergone that surgery and will now be recovering over the next year in an attempt to salvage the lavish career both he and the Twins’ organization have hoped for. Labeled as my number two prospect within the Twins’ system, he’s someone who has shown a ton of promise. As I’ve written before, he came with the hopes of being a five category player, offering a mix of power and speed at the shortstop position. However, after a disastrous 2019 season where he changed his swing, worked on his mechanics and tinkered with his batting stance, it left many feeling some doubt as to what exactly the Twins had with their once promising young prospect. Some doubts were put aside with his 2019 Arizona Fall League performance as well as the tales of his dominance during the 2020 Summer Camp with other Twins players. Still, he’s been graded very highly by many, and was touted as someone with potential for greatness:

What does this mean?

There are some important things to note here.

That is a loaded crop of players at shortstop, making me believe that the Twins, who have spent money recently, may splurge to sign someone else long term. Where would that leave Royce Lewis?

Let me start off by saying that this injury pushes his ETA back at least a calendar year. I had him debuting in 2022, but now, best case scenario, I think 2023 Opening Day is something that can be attained. That’s assuming all goes well with no setbacks.

At the end of the day, I think the Twins and fantasy owners may have to come to the realization that Royce Lewis’ time as a shortstop within their system may be over. Maybe I’m overreacting, but my initial thought is that it is an absolute long shot of that happening now. For the sake of argument, let’s assume that’s still the plan. Lewis will come into 2022, back from a torn ACL, and looking to regain his form at the plate and on the field. Shortstop is the one position on the field where flexibility and mobility are the most important. There’s no guarantee that he will regain all of his past speed and defensive prowess. On top of that, he’ll have to fix the swing that had holes in it during his last competitive baseball stint. Sure, he looked good against his own teammates in the summer of 2020, but a lot of what we hear are tales of “he said, she said” and pitchers don’t always give their best offerings when playing.

There had been distant rumors of the Twins transitioning him into the outfield. Perhaps that’s more of the case now. He hasn’t really played much of any other position during his time with the Twins. If they were to transition him over, it would be a year, following rehab, of him learning a brand new position. Just another hurdle. Here’s a list of the positions he has played during his tenure with the Twins: 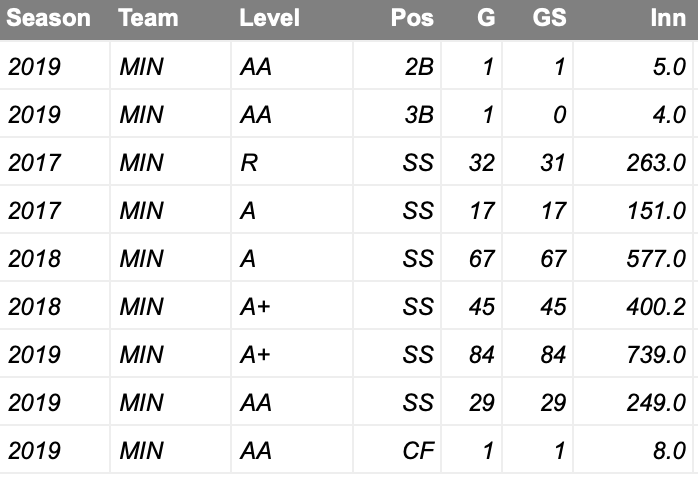 Finally, the Twins may ultimately trade him, in order to acquire something that they need now: pitching. The Twins’ current rotation features an underwhelming backend which consists of J.A. Happ and Matt Shoemaker. If they find themselves contending and in need of another arm, perhaps they trade away their top prospect for an impact pitcher to propel them into the playoffs and beyond. I’m not suggesting that this is their best option, but if they were to receive a pitcher that they can control over multiple years, it may be worth the effort.

Ultimately, I think this is the end of the Royce Lewis era as their shortstop. They have other middle infield options that are on their way up the system. I think that Lewis still holds enough upside at the plate to warrant him staying within the Twins’ organization. That said, with a nice crop of shortstops next offseason, I can see the Twins signing one of them to alleviate any long term questions they may have. He will be in the outfield for them at some point in the 2023 season, and Alex Kirilloff will move to first base, while Miguel Sano will either be the team’s new designated hitter or will be gone from the team, since the Twins hold his option that year.